RANGER AGAINST WAR: Defining the Problem < 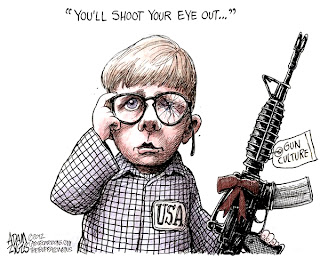 At brother site Milpub we recently had a 134-comment thread on the Newtown shooting tragedy; after 134 comments it is clear that we are neither able to define the problem nor are we able to even agree if there is a problem.

Ranger hearkens back to 1973, when he commanded the 3rd Army Marksmanship Training Unit. It became apparent to him at that time that the leadership of the National Rifle Association (NRA) was transforming itself and its magazine, The Rifleman, into a Right-wing mouthpiece for the Republican party.  The magazine shifted its focus in the 1970's from the shooting sports and gun collecting to political matters.  Soon, the agenda became aligned with the Christian Right, an affiliation which has been maintained through today.

This far-Right stance was adopted after Nixon's 1968 Presidential election politicized and radicalized a fraught nation with his law enforcement emphasis.  This focus was a thinly-veiled racial agenda since being tough on crime meant being tough on black criminals.  The nation was riven, Right and Left; the divisiveness continues today, hence the problem agreeing upon the "gun issue".

Ranger will try for a definition by asking the questions:


Well, it is a start. These are the sorts of issues that we should discuss, and probably even enact into law before considering more Draconian measures like weapons bans, magazine restrictions and all of the other initiatives being bandied about by the anti-gun lobby.

If we pass laws that require education and safe handling to include safe storage, and this does not work to mitigate the spree killings that have our public up in arms, then it will be time to consider tightening up the requirements of ownership even further.  But short of these initial efforts it seems injudicious to bypass the simplest controls which have proven effective in countries like Canada and Germany.


Doing other than this is similar to starting a presumptive war without first exhausting all diplomatic possibilities in order to avoid the ultimate conflict.

We should contemplate all possible solutions before jumping headlong into a needless battle.

posted by rangeragainstwar at 9:26 PM

You are making a lot of sense in this post, especially with the last sentence. Unfortunately, that's not the American way in 2012/2013. It seems taking the most radical view, fueled by flights of fantasy that produce an intransigence that prevent any logic or reason from penetrating that view has become the norm.

We have laws against killing people... and a high rate of killings.

We have laws against suicide, and a high rate of suicides.

We have laws against misusing weapons... and a seemingly growing rate of misuse.

We even have a legal premise that fomenting violence is sanctionable... and a media monopoly that makes a fortune off of sensationalizing violence.

There's yer trouble... in there somewhere

Blake & Cholo are onto something:

Since laws are only effective when the governed choose to obey, it seems we have an obedience problem. Now, how does this slap up against our vaunted freedoms?

Liberal-thinking people often disdain the lock-step thinking of their erstwhile adversaries. Yet there must be something "betwixt and between" (as the mountain people would say) anarchy and enervation which accords with being a good citizen in a vibrant society.