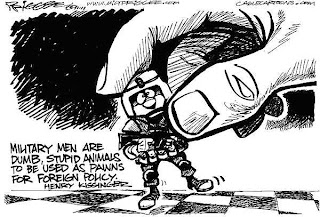 Wherever I go, there you are
--Chanel No. 5 advert, Brad Pitt

How can you mend this broken man?
How can a loser ever win?
Please help me mend my broken heart
and let me live again
--How Can You Mend a Broken Heart?
The Bee Gees

So, what is the effect of understanding that one has been used in the name of honor for a dishonorable action?  It is surreal when one understands that there are layers above (and below) one's execution which alter its effect, both in the mind of the executioner and the perception of those affected or those observing.

As with current wars, the strategic assumptions of the Vietnam War were faulty and not reality-based.  Success would be elusive and achievements overstated.  What is required for "success" in such a situation is the True Believer, the person who fills in all the ragged edges with the fluff of hope and all the other non-metrics which fuel the continuation of a failed endeavor.  Smugly, we dismiss the co-dependents among us who are in denial of their doomed D.O.A. relationships, but when this same magical thinking is applied to affairs of state, strong men are all on board.

So what happens to a soldier sent to fight a losing battle?  Does he engage in a repetition-compulsion in the local Veterans of Foreign War (VFW) Post, re-living the successes, real or hoped-for in the battles of his youth, the camaraderie of a long-ago time?  Or does he strike out in fury at the betrayal of his innocence, railing to all who will hear him that things are not as they would seem?  Or, if and when he leaves that world, does he close that door and live successfully in a new milieu, untainted by his formative sad realizations?

Pragmatism calls for the latter; surely the military would be most pleased with a workforce that just blended back into the woodwork, and society can ill-afford the damage wrought by broken warriors, however, people are not pragmatic mechanisms.  They break along unforeseen fault lines, and can be pre-stressed in ways unknown to the finest therapist.  But even for the most prime, most fit subject, what does war do to him, even a "Good War"?

The doctrine of Counterinsurgency (COIN) sounds like it could be a tonic for the soldier, after all, he is after hearts and minds and building communities, yet now even the United States Military Academy is questioning the validity of COIN and its applicability to U.S. doctrine.  General David Petraeus said the Phony War on Terror (PWOT ©) was now a multi-generational long war, but how, when and why did that transition occur?

As with the denial of a co-dependent, stretching a failing endeavor out past one lifetime does not morph it into a successful plan.  As with the sunk cost fallacy, this policy and doctrinal mutation arises from a nation itself divorced from reality.

Playing hokey-pokey with a failure is not a way to stumble upon success.  For all the field manuals and reputations on the line, sometimes the correct move is a retrograde.  COIN is a loser.

By teaching us to hang in there for the duration of a Long War, one in which our mission is to win hearts and minds and essentially change the destructive (as we see it) behavior of the locals, the military makes co-dependents of us all.

And codependency is not the route to either clarity or good health.

posted by rangeragainstwar at 6:26 PM

Hi Ranger. I've been reading your reflections and it reminded me of an essay I read in the nyt recently by a 29 year old staff sergeant veteran of the wars of and on terror about the experience of killing, dehumanization, and camaraderie in a similar vein to your own.


I was wondering if the conditioning for killing was the same for veterans of more conventional wars. Namely the motivation for these soldiers seems to be more of camaraderie, feelings of vengeance, and dehumanization more so than a clear mission and objective as you describe. Perhaps my assertion is ill founded but at least before was there any sort of begrudging regard for the 'enemy'? Or acknowledgment of valid interests that led to conflict? "I'll kill you but you are a soldier like me" as popular culture leads us to believe? In counterinsurgency war of civilizations where the US is in a multigenerational war fighting locals there seems to be a fundamental disconnect about how violence can be used in the situation. The narrative is those fighting are simply gangsters part of a gangish cult (hajis) that can be eliminated, we have seen for example fallacious allegations that Taliban fighters are motivated because of salary- how do you fight the most destructive military known to man for minimum wage is beyond me but reinforces ideas that the enemy are like mobsters in America being paid for violence and the only solution is a bullet to their heads. The fact is many are also 'kids', grew up as refugees, and local guys waging a war of national liberation that can only be defeated at great cost. It might be national soldiers who are motivated by salary or gangish group loyalty it seems.

Why am I brining this up? I wanted to ask you what you thought of the ideas of group loyalty that seem to motivate US soldiers to deal such unproportional 'retaliation'. So many die for every US soldier killed whose numbers are relatively small thanks to technology, and that destruction ends up directed primarily at civilians. Non-Americans ( I live outside America) have this impression that US troops are young panicky and overly reliant on air force technology whose responses are indiscriminate and un proportional with a focus on survival and screw all retaliation. So many incidents of war crimes and atrocity in this 'low-level' conflict (primarily committed by the AF) by soldiers like rape, torture, hunting civilians, hell we are experiencing in Newton what Afghans experienced in the Bales rampage but we want him to go free and 'get help' because he served the country. And when occupied people attack soldiers they are ungrateful?

I don't understand how one can join the modern military and give up free will and 'follow orders' in this world that has moved largely away from interstate conflict? How do you become a tool for the government to kill third world 'gomers' (as FDF chief so affectionally puts it) or any (unjust) cause it wants? How is that moral? I'd imagine you should believe in the cause first before you fight for it- perhaps victory for America against the existential threat of the Russians? Is it the focus on mission, is it the camaraderie? I mean I get it when one goes into a fight with a valid conviction like volunteering in the Spanish civil war WW2, wars of 'national liberation' the enemy is unquestionably evil in your mind- even in the beginning of our war against 'the terrorists' not realizing it would be the locals we would fight.


Soldiers are not to be blamed, elected officials are is the mantra. Yet we have a 'professional;' military of careerist soldiers who volunteer to go abroad and kill knowing full well what they are going to go do to hostage populations, who are worshipped by the rest for doing so. The Seal team 6 Mark Owen guy describes his rationalizing of killing as 'if you have seen one dead body, you've seen them all' as if his role is very small in making those bodies and inevitable. If Adam Lanza and James Holmes had done what they did in Iraq or Afghanistan shielding themselves with military jargon they would be heroes like Bales is or simply 'bad apples' to be quietly dismissed or given light symbolic punishment in a culture of violence. Yet in the end its the soldiers (mostly marines actually) who are doing the atrocities such as the night raid that killing the pregnant women and kids and then pulling out the bullets and claiming they found it like that, its the soldiers who call on airstrikes in crowded civilian areas. Its war 101 civilians die and the US just loves killing 3rd world Hajis- let God sort them out right?

Im being overly sentimental or self righteous perhaps, probably un-American and blasphemous and unintentionally disrespectful and I might be challenging your honour dishonouring your personal reflections but that is not my intention. I am not speaking of the Vietnam war or wars previous where brutal lessons were learned but these wars of choice that ignore those lessons by an apathetic public that worships soldiers as if they are heroes without any conditions. I'm tired of reading idiots commenting about whatever atrocity or killing article with things like 'war is hell' we cant arrest them because then they see us coming or anyone who feels bad about this is a terrorist muslim lover. But I am trying to understand how any human being in the 21st century would adopt this Roman attitude? That the blood of ours is worth more than yours, all innocent blood is sacred and by that logic all combatant blood profane- whether it be flip=flop wearing teenager of kevlar wearing teenager. I am not a pacifist, I support just war but those are typically not waged by militaries.

I don't get it. I don't get how nobody can realize that invading and killing local people for whatever agenda is not heroic. The Staff sergeant describes killing the 'insurgent' as legal and according to his training. In his mind perfectly alright yet he doesn't get that it was he who had broken in another man's house. He was the invader, but as long as he was defending his fellow marines it was alright (the logic of every unjust invader or unjust soldier ever) The government is a gang and you join the army to be a part of history. How is committing violence to go down in history any different than any other mass murderer? Hey as long as its not my 4 year old.

Anon,
We both are struggling with similar thoughts and emotions.
I will cut my cmts to the quik since your thoughts are so free ranging.These are the foundation of my actions.
There is no such thing as a multi generational war. I will write on this the next i sit down to write.The long war is a fucking right wing con job.
There are no existential threats to America EXCEPT those emanating from within our society. Surely the nucs that we possess are more life threatening than any non-state terror threat.

As for USMC being mostly to blame for excesses i beg to differ. All are equally to bear a share of the approbation. Remember that they pull the trigger , but we put them on the firing line.
I sense more hate in todays military. If you read BAND OF BROTHERS this hatred is not the totality of the book, although several individuals were motivated by personal hatred. Now it's institutional.
imo.
jim