RANGER AGAINST WAR: No Taps for Ty <

No Taps for Ty 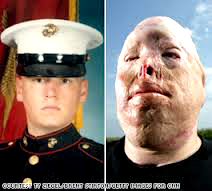 Ah, but you who philosophize
disgrace and criticize all fears
Bury the rag deep in your face
For now's the time for your tears
--The Lonesome Death of Hattie Carol,
Bob Dylan

Our obituary for 2012 will be in the form of a requiem for a newly dead former Marine, Ty Ziegel.

Writing newspaper obits, one quickly comes to understand that all deaths are the same.  "He worked for ___________; he was a member of __________ church and union; he is survived by ____________."  Were this a standard obituary, that would do, but we are going to remember Ty Ziegel, the profoundly combat disfigured Marine about whom we wrote four years ago.

Ty died 26 Dec 2012, almost eight years to the day after he was wounded while on a routine patrol during his 2nd Iraq tour, when a suicide bomber blew up near his truck. Ziegel underwent 50 operations and a 19-month recovery.

The grotesquely disfigured Ziegel was feted by the press for his soon-to-be failed marriage to his high school sweetheart; photographer Nina Berman won the World Press Photo competition for portraiture in 2006 for her series on Ziegel.  "Love overcomes all" was the hopeful theme.

Ziegel died after Christmas in Metamora, Illinois, after falling on ice outside of a bar.  Cause of death has not been declared, though one of two small online newspaper notices mentioned the autopsy showed that he had an enlarged heart.  In a perfunctory 12.28.12 news story in a Central Illinois newspaper, his mother and father are quoted:

"It didn't bother him, the grocery list of injuries he had," added his father Jeffrey Ziegel.  It didn't phase him a bit." [sic]


The embedded video link in the story is broken; Tyler Ziegel's Wikipedia page has been taken down. 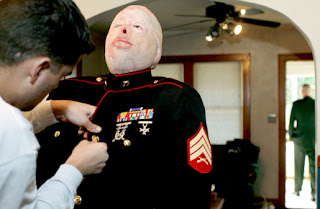 Ty's spirit probably began its dissolution a few years back, artificially propped up by the unbidden celebrity heaped upon him.  Oprah devoted a program to him and his bride when the fairy tale was the spin; now, almost a week out, no major news service has even noted his ignoble death.

There are those who will say, "He volunteered ... hard cheese, old boy.  Those are the breaks."  Harsh, and perhaps true.  To be sure, we are all here on borrowed time. But Ty was robbed of the vicissitudes of a life in the service of a questionable national goal.

For Ty Ziegel, we could say, proximal cause of death: cerebral hematoma.  Distal cause: Unjust discretionary war.

"Only the dead have seen an end to war."

And, really...don't we all love a fairy tale?

We want the fairy tales, so we want this guy to be loved and happy and die old an full of honors just like we wanted Audie Murphy to be a spotless hero and not a man who fought with PTSD and other emotional problems all his life after WW2.

So when this poor guy died, what could the papers say, really; that real life in all its hard, cold harshness smacked him down?

I hate to even say this, but that's a "dog bites man" story. It wouldn't play to the crowd, which wants the fairy tale...

I think it takes another soldier to even begin to get it. He did serve, voluntarily for a country he believed in. One that often makes excuses or dismisses its own mistakes. He was loved and will be remembered. There is no amount of gratitude that can be expressed for someone that served to make things better, without question. Gods grace be with him and he will not suffer the flaws of man, he will go to be with that which created us all. No at rest and at peace. Thank you Ty.

Your service to your county was bigger than any call of duty should ever be. Thanks to you and people like you my grandchildren may never have to go to war. For all of your service I thank you and pray for you.

Yes, Ty's "service to [his] county was bigger than any call of duty should ever be." Correct.

But he will not keep your grandchildren from having to go to war, as those decisions are far above his pay grade. And your prayers, though a very fine gesture, may not help Ty at all, now, sadly.