RANGER AGAINST WAR: Violence is Here to Stay <

Violence is Here to Stay 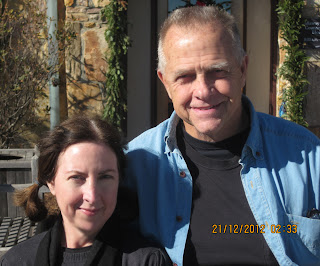 [Ranger has lots of meaty posts regarding recent events ... but as we're on the road for the holidays, posts will be meted out in a helter-skelter manner.]

Today, we enjoyed lunch with Ranger's friend Paul Longgrear and he shared his thoughts on the most recent shocking (sadly, no) school shooting.  What follows are Paul's written thoughts on the matter:

The evil, demonic-inspired massacre at the Newtown elementary school is a terrible thing, but we can prevent it from happening ever again.

Am I angry about all those dead kids? Yes, and I want a real solution.  The question is, do we want to prevent the next occurrence?  Do we want to protect innocent children and their caregivers?  Do we want them to come home unscathed at the day's end, or do we want to keep an assault rifle out of the hands of an evil nutcase?  The two are not commensurate; the first is almost 100% doable; the latter is not.  While the matter is juggled as a political hot potato, more lives hang in the balance.

In the 1950's and 60's Muslim terrorists targeted Israeli schools and children on field trips.  Yet it has been almost 40 years since the last school massacre at Ma'alot.  The Israeli's attacked the problem, not the origin of the problem. Israel saw the problem as endangered children, not assault rifles in the hands of their enemies.

They fenced in their schools and stationed armed guards at the gates.  It is embarrassing that we do not have a politician to front this immediate solution.  The guards could be trained soldiers in civilian clothing.  It is not an impossible solution, and is one fairly quickly emplaced.


Pragmatism demands we decide: Do we love our political agenda more than we love the immediate preservation of life?  We can play politics with guns, or protect our children.  We have never been able to ban drugs, so why think we can ban anything?  You can criminalize it, but once people are dead, you cannot make them undead (no matter how many zombie films you watch.)

If you are in the first camp, brace yourself for the consequences of your inaction: decades of violence while "assault" weapons (possibly) work their way out of the system due to obsolescence.

If you want your children safe, petition you elected representatives and declare that you want their schools protected.

We already have metal detectors at most schools, but they are worthless once someone breaches the detector.  We also have Officer Friendlies on the school campus, so the idea of police has already been integrated into the culture.

The next logical step (which does not encroach upon our civil rights but DOES protect our right to self preservation) would be to secure the entrances to schools with an armed guard, either at the entrance or at a remote post.  The logical personnel for this position would be retired military veterans or Homeland security personnel.

Take some HSA personnel out of the airports and put them on-task to do a necessary job -- protecting Americans from their own.  This is the real and present danger ... not frisking citizens who might be carrying more than 3 ounces of shampoo or handing out Ziploc baggies.

Sadly, no.
When someone puts a gun to their head and pulls the trigger (or forces a cop to pull it for them), they are a suicide, no matter what they were doing 30 seconds earlier. And the US is in massive denial about our suicides (30K+/annum *that we know about*), to which military and even police are not immune.

The media knows this, and they know that by making celebrities out of those who choose to go out this way they up the ante every time, sowing the seeds for ever juicier stories in the future.

It is only a matter of time before some suicider turns to a chemistry set and goes for a new high score. Then what? Ban science?

Until such time as society admits how badly self destructive we've become for our young people and does something about the suicide epidemic, this is a cancer that will spread like wildfire, and no amount of politician's bandaids, like banning guns or putting a George Zimmerman in every school is going to fix a damn thing.

The problem with fencing the kiddies in is that they're not just in school buildings.

In Israel, a small country, one generally knows where the danger is coming from and what it looks like. Here, the danger looks like us, acts like us, and can come from anywhere at any time. It, like the kiddie targets, can be anywhere.

Lotsa fencing and guards required, and expensive. And the majority of the hard-working, over-taxed US taxpayers who do not have children in schools, would be peeved.

Not feasible, no how, no way.

Christ, this is ridiculous, guys.

Your answer to nutters with guns - which almost every other industrial country has gone a hell of a long way to dealing with by regulating the number and type of firearms said nutters can acquire - is more effing guns?

I have nothing I can really say here other than...you're kidding, right?

--agreed, but ditto in Israel. The terrorists look like them. And of course, though kid deaths tug at the heartstrings, it is violence in general that should concern us, for no one's death is any lesser than another.

Chief,
IF anyone is nutters here it's the person that thinks that guns are the problem and this can be regulated.THE PROBLEM is nutters using guns. How do u legislate that?
You nor the POTUS have cited any academic, mental health data, or any criminology studies that indicate that additional meaningless laws will solve or ameliorate the gun violence.
I don't give a fuck what other countries do about guns. I am sworn to uphold the Constitution.
BTW-when someone in your unit screwed up did you punish everyone?
jim

Wow, using Israel as a model is a very dangerous road to take.
I'm surprised that responsible US gun owners are not more pro-active in self-regulating.
This latest lunatic shooter is making all gun-owners look bad.
Personally I don't understand the need to own assault weapons but far be it for me to threaten anyone's constitutional rights.
The US Constitution is not infallible, I seem to remember a section counting some people as 3/5's of a person at one stage.

JACK,
Would you pls quote line and verse in the Constitution about the 3/5reference.
I'd like to bone up on this.
What does the word infringed mean?
Obviously there are legal shooters and non legal shooters. The problem is that US code regulates the legal shooters whilst the illegal 's do what they do.
If we outlaw guns completely would that solve any problem? Only legals would comply so where would the progress happen.
I and those like me comply with all state,local and federal laws , but that doesn't stop the illegal's from their activity.
I and all shooters are being treated like 3/5 ths of a man b/c we espouse gun ownership.

jim: Yes. It was called "collective punishment" and it taught the troops to look out for their buddies and catch fuckups before they came to the attention of the higher ups.

Look, guys; we're just not going to agree on this, and fighting about it will just set us at each other's throats and do nothing to solve anything. We're never going to convince each other, we're just going to have to agree to disagree and move on.

So - I'm done here. Shall we take up a topic we CAN find some middle ground on?

And so it goes, 2 firefighters in NY state shot dead while responding.

At any rate, jim & Lisa, you 2 are quality and I want to wish you the best for this Holiday Season and even better for the New Year.

BB,
Merry Christmas to you also.
The shootings in NY prove my point.
Ca/Ny have very stingent gun laws, but that doesn't solve the problem
Criminal intent always finds a weapon from some where.
jim

Chief,
As i ALWAYS say.
The beauty of the US of A is that we all have the right to be wrong.

Merry christmas to you and yours.
jim and Lisa

Thank you, and so glad to have you along for the ride.

Thank you, and so glad to have you along for the ride.

A kiss on both cheeks!