RANGER AGAINST WAR: A Who Dunnit < 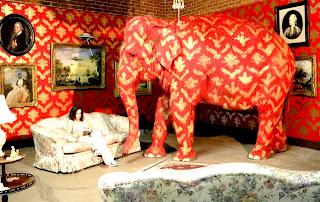 --the elephant in the room, Bansky

But I ain't losing sleep and I ain't counting sheep,
It's so funny how we don't talk anymore
--We Don't Talk Anymore, Cliff Richard

This small story is rife with implication.

The Jacksonville Times-Union ran the following Tuesday in their "Law and Disorder" column:

Man shot in arm during walk

A man in Jacksonville was shot once in the arm Sunday night in the area of West 38th and Main streets.

The victim was walking home from his cousin’s house when a man in the street asked, “Who you is?” said detective M.E. Pichardo.

The victim replied, “Who you is?” back and the shooter pointed a handgun at his face before hitting him multiple times in the head with the gun, Pichardo said.


"Who you is?" Is there any more poignant cry of confusion, both grammatical and situational?" Was either party able to ascertain who the other was? Wouldn't it be wise to beat feet and hit the bricks at a rapid rate after such an inquiry?

As on the national level, if you are not the right tribe, name, club, crew, peeps, gang, we might have to take you out. If you are not a fast-talker, your inability to respond might just be the end of you.

The exchange lacks the clarity of the more military, "Halt, who goes there?", followed by a password, followed by an "advance and be recognized." It also indicts the efficacy of Florida's No Child Left Behind policy, and whatever succeeds it. Though the subject of the repetition in the last graph of the declarative, "You got it" is unknown, its insistence without clarification is a standard of poor Southern speech.

When adjectives fail, Southern dialect allows simple repetition to serve as an intensifier or descriptor, as in, "It's a good, good day", meaning something like, "a very fine day". Triple repetition is not unheard of to express a superlative feeling.

So, from this short bit we can surmise what happens when ignorance meets aggression, or aggression arises out of ignorance: an inexorable walk towards violence. You could blame the gun for what happened, but that explosive outcome is only the thing which got the interchange press.

In fact, these brutal meetings of confusion play out daily in every block of every city; yours, too. If we do not get a slug in the arm we sustain a figurative bloodying of our heart or soul. We all suffer from the Invasion of the Body Snatchers' terror expressed by these two men. "Who ARE you?" I thought I knew you, but I find that I do not.

Labels: bad grammar, confusion, education, violence in america, who you is?

posted by rangeragainstwar at 7:00 AM