RANGER AGAINST WAR: Getting It < 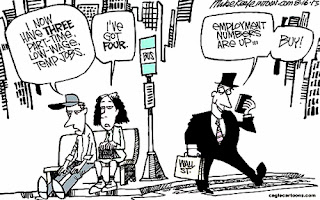 It is always nice when people "get it". Two friends to RangerAgainstWar recently did so.

Juan Cole at his site, Informed Comment, posted, How the US Government Betrayed the Constitution and invented an Imaginary Fascist One. An excerpt:

". . .How corrupt our system has become is evident when even the New Yorker emphasizes that a secret Senate report found that torture in the Bush years was 'unnecessary' and 'ineffective.' Not that it was 'unconstitutional.'"


Next, Alan Cring in the Examiner.com nails the Republican's failure in the healthcare debate:

". . . What could have been a small but effective movement to shape and, in some ways, thwart the excesses of the emerging distributed authoritarian state expended its capital in an angry rage against a program that somewhat poorly addressed a real and widespread need of the citizenry for affordable health care available to everyone.

"The Tea Party failed. The Affordable Care Act will be implemented, and it will become entrenched and relatively popular, but that's beside the point: in their blind hatred of the man in the Oval Office, the Tea Party members focused their wrath on an artifact of the emerging, grim governance of the new America rather than on the fact of the governance, itself.

"Handed a battle they could not win, they charged. Their less rash allies saw the carnage and stepped away. Their foes now dance in the streets. The general populace wanders away to see what's next on TV."


Well done to both.

Is it really so shocking anymore about how people are NOT shocked about how we torture, murder and otherwise do all the evil drek we accused the Nazi's of doing? Its the du jour thing now to blow people to bits with drones instead of torture them. I'm not sure that is a morally higher position. Its no longer shocking that these poor sods gave us 'actionable intelligence' (read: told us whatever they think we wanted to hear to make it stop) and we promptly went out and grabbed some other poor sod to torture who knew jack-all. Sadly, alot of those poor bastards are STILL rotting in Gitmo even after being cleared of any charges by a judge. But just remember, its not Obama's fault he can't let these poor fellows go!

As for the ACA, I applaud the ham-handed efforts of the morons in the White House to implement this disaster. I have to often remind my Statist Republican buddies that it was Mitt Romney who basically wrote ObamaCare. Jon Stewart was right, the Democrats declared victory right as it blew up in their faces courtesy of the roll-out being so inept (is it any wonder than when government throws money at something, it gets pissed away). The ACA is a boondoggle and millions of Americans are waking up to the fact that Obama outright lied to them, their Congresscritters don't give a rat's arsehole about them and they are losing what little health insurance they have in favor of a pile of drek. There is a way to fix our health system and it starts with gutting the Insurance Industry's lobbying power (well, that and a host of other things). More important is that the newest drek-heel to be nominated to run The Federal Reserve is dead set on continuing to fire-hose spray money into the economy. BTW, did you notice your grocery bill go up this past week? I sure did. Inflation here we come!

The hand that is burned is the hand that learns best. People are going to get a bellyful of Corporatism brought to them courtesy of both parties. Its a buffet table laden with drek and we're all going to have to take a heaping helping. No more turd sandwich bites, no siree bob. I'm chucking with glee watching the Republicans who stabbed my wing in the back get theirs all the while the Democrats have set themselves up for the circular firing squad that will be 2014.

In other news (and I'll wrap this up), it was SO SWEET to see the NSA's wesbite got hit by a DDOS attack last week. I literally laughed until I nearly cried. I sincerely hope that god&^%$ed complex they built burns to the ground right before the NSA and its proponents get cashiered. If I believed in Hell, the people who enabled and participated in this abortion of justice would be spending eternity there with all the other murderers, traitors and scum of the universe.

Yes, ISTM we get drek from both parties.

The groceries are definitely, undeniably, rising. We hear people questioning how they will be able to continue to eat, at least at the level to which they've become accustomed.

The arrogant Republicans will front a fantasy of Victory Gardens (and Ms. Obama's in on this one, too), but the reality of the slaving worker waking up in the even earlier dark to hoe a garden is absurd. The food they eat will be worse, more manufactured and cheaper.

But hey, there's O-care for the resultant bodies, no?

What a sanctimonious bunch of bull Brooklyn Red Leg.

I adore the Teabaggin' Declarations
and millions of Americans are waking up to the fact that Obama outright lied...

What a sanctimonious bunch of bull

Ah, nothing like a little projection in the morning. Please, do go on.

I adore the Teabaggin' Declarations

Followed by a course of ad hominems...

And topped off with a helping of strawmen.

You seem to be slow on the uptake there Brooklyn Red Leg.

The literally is in italics... Now what could that mean??? Couldn't be because You put the stock Right-Wing phrase "millions of Americans are waking up" could it?

Nooooo! Couldn't be that could it?

And nice right-wing dodge. Oh I hated Bush too. Funny that, can't find many red-blooded conservatives who loved W nowadays.

But, hey it's your own crazy head you have to live in it. Please don't shot any of us regular working class americans to stop the Obama Fema Camps though okay?

You seem to be slow on the uptake there Brooklyn Red Leg.

Again, with the ad hominems. Surely a sign of a weak argument.

The literally is in italics... Now what could that mean??? Couldn't be because You put the stock Right-Wing phrase "millions of Americans are waking up" could it?

I'm not sensing an actual argument from you. Maybe could you make one?

And nice right-wing dodge. Oh I hated Bush too. Funny that, can't find many red-blooded conservatives who loved W nowadays.

Again with the ad hominems and strawmen.....

But, hey it's your own crazy head you have to live in it. Please don't shot any of us regular working class americans to stop the Obama Fema Camps though okay?

Again, ad hominem and strawmen fallacies. Could you possibly make a rational argument?