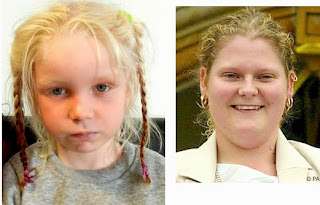 --Roma girl ("Maria") and Louise Brown,
who was the first "test tube" baby

I'll bite and comment on the Roma-child-abduction-in-Greece-story -- the latest salacious media effort to distract us.

Let me be clear: this is not worthy of being a national news story; this is press distraction #12,456, ... If anything, this might be of regional interest in the location of the camp in Greece. This is NOT news we can use.


"Maria's case has drawn global attention, playing on the shocking possibility of children being stolen from their parents or sold by them."


Shocking? What blather, yet we are lulled into a predictable outrage.

Children, like animals, have always been in too great or too short supply, depending upon your position. They are sold like every other thing on the common market any day of the week, and some people are glad of it. They pay transaction fees to adopt, often covering the mother's obstetric bills plus living stipend. Attorneys often transact these contracts.

At the lower end of the socioeconomic strata, for those whose babies are not so desirable a commodity or whose mothers are not savvy enough, babies in the United States may be abandoned on the doorstep of a hospital or a fire station with no charges pending against the mother, just like in days of yore. The problem of surplus babies is seen occasionally in the report of a newborn found dead, often abandoned in a dumpster.

But the story here is NOT the story. Neither the Associated Press nor the thousands of impassioned commenters at the various outlets which ran the piece will address what it is, though.

"Horrid woman; monster mother" cries the vox populi. Her defenders will say, "don't pick on the Roma -- this is racist!" But it is beyond monsterhood and bigotry, this story IS economic and misogynistic, betraying us all as hypocritical voyeurs; but beyond that, something darker yet.

In this case, the Bulgarian biological mother said she did not have enough money to raise the child, and so gave it to a family willing to raise her. Now, genetic tests have been performed and the mother who did not wish to be further involved will forcibly be held to some sort of accounting. (It now appears that the media attention has prompted her to look like a "good mother," and she is requesting the baby back; since her economic condition is still dire, the baby will probably go back on the market, soon.) All because the child did not "look" like she belonged where she was.

What is the problem? The world can be a mean place, and really, not everyone can be president. Young women not in a position to raise a child traditionally have placed their offspring with a more capable family (if abortion is not a choice), and carry on with their lives. College newspapers routinely run adverts from "well-off" infertile couples who will pay a young woman "in trouble" in order to adopt her hopefully genetically sound, soon-to-be-born child.

Money is usually involved in adoptions, whether it is to a church-sponsored orphanage (children's home for wayward girls) or a contractual promise to the biological mother to pay for the child's expenses through college. For many parents who seek outside the United States for an adoption, fees to the transacting facility can be exorbitant.

Is it the overlay of the church sponsorship or the humanitarian idea of doing good that absolves such transactions from taint?

What if the Roma mother had sold the baby? What in capitalism prohibits selling the fruits of our labors? We sell all manner of bodily extrusions. We sell our sperm, eggs, and our hair. Surrogates may sell time in-utero as a growing medium for someone else's fetus. Prostitutes rent their vaginas, legally in Nevada, and some would call that an empowerment. Sexual therapists (ala "The Sessions") can also use their bodies for pay.

We buy micro capsule hotels (=test tubes and Petri dishes) in which to grow our test-tube babies (Louise Brown, the first "test tube baby", celebrated her 35th birthday this year.). Henrietta Lacks' genetic lineage (HeLa cells) has furthered medical research since her cells were obtained in the 1950's (but we now find that problematic as her family was neither notified nor remunerated for the biological material.) Some buy organs, while others wait for an accident to snuff out a life in order to get the needed part. Because we are uneasy about bodily matters, we have gerrymandered a shifting map over what may be transacted and not. We are a psychologically cobbled, hodge-podge of a people.

Beyond the child-selling story is our preference and sympathy for certain biological types.

It is the blonde child who holds our stare ... Madeleine McCann in Portugal, JonBenet (who's still in the news today), Caylee, and now “the blond angel” --so-dubbed by the Greek news media -- (or, "future pickpocket", depending on how you see matters.) Children are abducted daily yet fail to make the press. Why? The others are not so photogenic. While we rail against eugenics -- quietly grumbling about funding the defectives or the generationally poor who live off the system -- who gets the press? The blond child.

In the incident early in the Iraq invasion, it was Jessica Lynch, and not her truck mate Lori Piestewa, who got the press. She made for good cover: Lynch was a typical blonde, blue-eyed West Virgianian, Piestewa, a heavier and darker Hopi-Mexican-American. Though it was Piestewa who fired her weapon and was killed while Lynch cowered on the floor of the truck, it was Lynch who was lionized in the press.

Beyond our preference for fair-haired baby faces, we may fear what the rejection of such a child by her biological mother portends, for if such a one is disposable, what of us who try through various means, cosmetic and otherwise, to appear wanted and lovable? Our chances seem diminished when the ground of that desirability is shaken.

If we cannot say who we are or what we do, we will not be able to engage in sincere dialog. War can then become squidgily about female liberation, while our own women lack gender parity. Neither women nor men are free (independent) because we are by necessity engaged in transactions -- buying or selling what we need. That is what affluent (or poor) people do. One's on top, one's on bottom, and capitalism ostensibly allows for some flow between the layers. Each has more or less freedom, but none are absolutely free.

But please, let's not be shocked like Captain Renault.