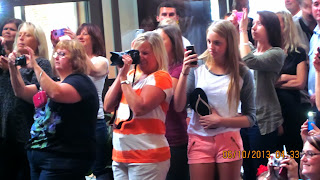 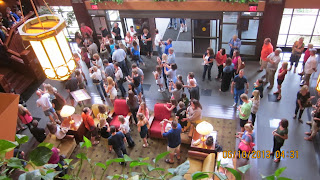 I am a camera with its shutter open,

quite passive, recording, not thinking

--I Am A Camera, Christopher Isherwood


Shortly after checking in to his lodgings in a Cleveland suburb, Ranger witnessed what felt like a flash mob in the motel lobby (above). It was a convergence of parents and students en route to attend a parochial high school prom.

Outstanding were two points: the jarring contrast between the abject poverty we had seen half and hour away in the inner city (dates shared color-matched formal outfits), and the quality of the viewed experience.

What are we as a society if every event must have the intermediary of the ever-vigilant camera? It no longer suffices to savor dinner and a conversation. No -- the meal must be posed and documented before it may be consumed. We are functioning as our own CCTV.

How can a people complain about governmental intrusion when we post our data voluntarily?

posted by rangeragainstwar at 8:10 AM

Switch "camera" to blogging, and I think you'll answer your own question. :D