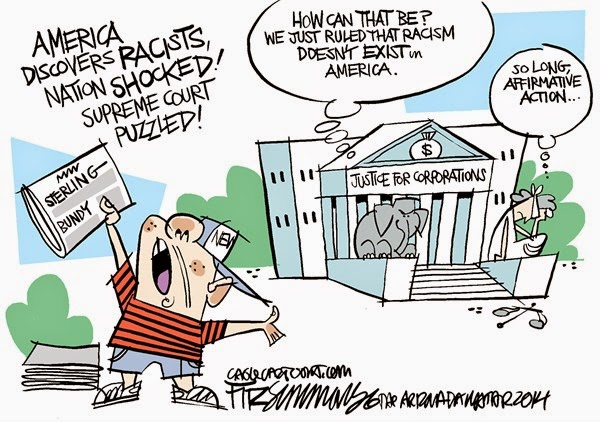 Final installment on sports and ethics (first are HERE and HERE.)

We are disingenuous when we feign outrage over each new offense by a sportsman, which is to say, any celebrity. Captain Renault is earning money for playing shocked at revelations of malfeasance, but we are not.

We bestow upon these people fawning adoration, and pay them inordinately to perform their deeds in order that we may be entertained. And we do not wish to be disappointed, for when they fail we do, too. Everyone's project become just a bit tattier.

The recent Sterling and Wilson affairs reveal our desire for distraction and outrage, but not rectification. And this is not the first time ball players have run afoul of the law.

In 1999, FSU's Peter Warrick, a leading candidate for the Heisman Trophy, and teammate Laveranues Coles were arrested for stealing clothes from a Tallahasseea department store. Fifteen years ago, the nation was a little less tolerant, and Warrick did not win his Heisman, though he did go on to a successful professional career. Randy Moss is another stellar example of the criminal-athlete from FSU who nonetheless went on to a stellar professional career.

Not only is our local Heisman Trophy winner out of bounds with the law, so is the university from which he hails. It was reported this week that Florida State University is one of 50+ schools charged with Title IX violations (55 Colleges and Universities Are Under Investigation for Title IX Violations Related to Sexual Violence.)

Title IX became law in 1972 to ensure women could participate in their own college leagues, and that they would enjoy protection from harassment, institutional or otherwise. It was meant to help level the playing field for women, and now many of those women have been betrayed.

But there is nothing surprising here. Violations will continue in a program riddled with participants and enablers who feel athletes are a group apart. The rest of us are complicit in our sports hero worship. Ball players are not hereos qua moving a ball on a court.

Among the talking heads denigrating Sterling was basket baller Isiah Thomas, a "disgusting sexual offender" according to sports columnist Christine Brennan. She said a jury awarded 11.6 million to a former Knicks executive Anucha Browne Sanders back in 2007. Yet Thomas has been all over TV the last 24 hours denigrating Donald Sterling. (Thomas works for NBA.com and NBA television.)

So we hop on the merry-go-round trumpeting our cause du jour, and our hypocrisy is complete.

The problem lies in us. We revere money, and we idolize people who have a skill in moving a ball in space. We forgo too many trespasses in the name of being entertained. And since the performers are often black men, we call it "one for affirmative action"; it is anything but.

In a world where money buys prestige, money and the desire for affiliation with the monied is sought at all costs. With money comes power, and power does what it wants.

These sexual scandals are but two rent pieces of the whole. Everything is of a piece. Why act aghast at the revelation of each new violation when the entire project is shot through with greed and vice?  We all know the score.

What is missing from the gestalt is care, respect, kindness ... all the things without a price tag, the things that earn an endeavor the title of "dignified" or "compassionate and egalitarian".

Today, we have transvalued those "traditional" values, as Nietzche anticipated. Some people are more equal than others, and "more for me" is the new mantra -- that's how the big boys play.

You can't legislate morality, specifically, the appetitive drives. Prohibition, the war on drugs and criminalization of prostitution prove that. You can criminalize the behavior, but you will not stop it. "What god do you worship?" -- that will determine your behavior and your valuations.