RANGER AGAINST WAR: A Life of Assumptions <

A Life of Assumptions 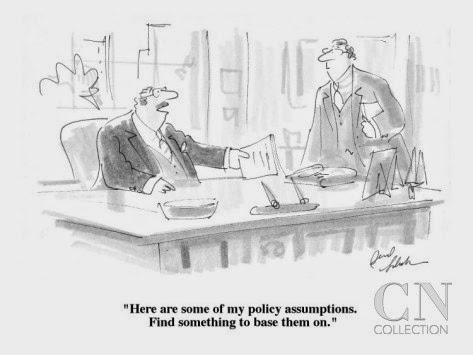 Our lives are based upon assumptions we call "reality", or, "the Truth".

We assume that if we work hard, we will get ahead. If we marry, we will be happy (or at least, have our needs met, mostly.) If we lead responsible lives, we will gain and retain our personal property. And so it goes.

The military and civilian sectors also make assumptions before constructing plans and policy but these ideas are often horribly off-base, and when a clunky organism like a military-industrial complex becomes committed to a plan, it can be very hard to change tack.

Some grand failures of the modern era:


1) The Domino Theory: If the Republic of Vietnam fell to the Communists, so too would the rest of Southeast Asia

2) Commie Killing: Killing the Communists in SE Asia would create a democracy in Vietnam

3) The U.S. military can protect the U.S. Homeland from Islamic Terrorists

4) Killing Taliban and Al Qaeda in Afghanistan will make the U.S. immune from terrorism

5) The "Reverse Domino Theory": If Iraq stands up and becomes democratic, so too will the rest of the region

8) Globalization will benefit the American people


Of course, killing Communists in RVN did not prevent the North Vietnamese from uniting the country under Communism. The dominoes did not fall, either.

Defeating the Taliban in Afghanistan did not destroy al Qaeda. The deadly whack-a-mole game merely caused them to move to other locations, and become more virulent, much like the result when whacking a ball of mercury.

Requiring health care insurance does not translate to more affordable or accessible health care. Just as did the Communists and the terrorists, The health care behemoth will create new tactics to insure their profit margins.

Assumptions must be based upon reality, and not vice versa. Reality does not emerge into being from assumptions. When our assumptions are false, the plans made upon them and their results will not be effective.

Depending upon which side of the fence you sit, you have assumptions about Russia, Ukraine, Libya, Egypt, Iran, Iraq, Syria, Afghanistan, etc. Those who engaged the U.S. military participation in so many foreign wars also made assumptions. Do you think your assumptions are any more reality-based than theirs?

posted by rangeragainstwar at 6:01 PM

My assumptions as sometimes repeated in my own head:

1.I assume that Murphy's law is always operating.
2. The only person who has my best interests in mind is me, but a caveat is that I need to check from time to time to make sure I'm still with me.
3. I will be taxed.
4. I will be taxed even more.
5.I will die
6. If I work hard, adapt and overcome, I will be able to provide for me and mine, despite #2,3 and 4, until #1 - or time - capriciously nails me; at which point assumption #5 goes into effect.
7. All bureaucracies are stupid entities subject to nepotism and group think that acquire self serving trajectories and momentums disassociated from reality. This includes governments. They should not be trusted or relied on; except when it comes to screwing up and putting a jackboot on those who disagree with the group think, trajectories and momentum.
8. Even such humble assemblies as the local merchants association and the neighborhood knitting circle can adopt the characteristics of bureaucracies.
9. Anyone who says they are trying to help you is trying to sell you something and/or to steal your soul. Run. If you can't run away from them; prepare to fight them. These wolves in sheeps' clothing.
10. Don't worry what anyone thinks about assumptions 1 -9. They are one of them.
11. The only constant in life is change. Get used to it (see #6).
12. Whining won't help.
13. The seven deadly sins are real. Humans are driven by them; especially humans that obtain leadership positions. The oppression and war will continue.
14. The super fine 27 year old woman is not looking at you because she thinks you're hot. She is more likely wondering what the old man is doing out past his bed time.

Almost everyone will "(put) a jackboot on those who disagree," bureaucracies being constituted any time two or more of you are gathered.

She may be assessing your fitness to serve as sugar daddy, but be forewarned: your excellence qua human is not capable of being quantified by that initial visual sweep.

The brand of watch on your wrist, is.