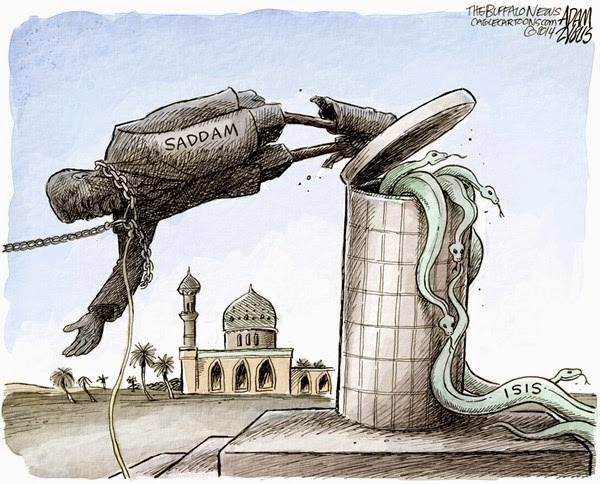 There's nothing more toxic or deadly than a human child.
A single touch could kill you.
Leave a door open, and one can walk right into this factory;
right into the monster world.
I won't go into a kid's room. You can't make me.
--Monsters, Inc. (2001)

What had I done?
[w]e were all quite likely going to be killed,
or beheaded, and for a news story
that wasn't going to change the world.
We thought it was important.
We had the best intentions
--War Journal, Richard Engel
___________________


A neighbor's young son -- a rabid Star Wars fan -- once asked me to choose my favorite toy from amongst his vast collection of miniatures. I chose what appeared to be a fuzzy benign creature from among the field of oddities.

"I'm just gonna warn you that he's a monster," said Theo, in a cautionary statement.

"He's a monster, and he does what monsters do. You chose him; you can't not like him for being what he is."

Lesson: Know the people you choose to partner with; if their behavior does not comport with yours, you will not change them. (Corollary: they will possibly change you, and not necessarily for the better.) It is Aesop's fable of the Scorpion and the Frog. This one idea is the distillation of half of the advice books on how to achieve a successful relationship.

Ignore this advice, and the ability to say you forged a partnership will provide you cold comfort. Review the past 12+ years of United State's foreign policy and come to your own conclusions.

From the mouths of babes. Word.

We have not been good at picking partners for 200 years.

Walter Wangerin jr.'s The Book of the Dun Cow tells a tale of animals led by the heroic rooster Chauntecleer fighting against the great evil Wyrm who encircled the earth and his terrible minions.

They defeated him, but in the sequel, The Book of Sorrows, the maggot worms that fed off the corpse of the great Wyrm infected all those animals that came in contact with it. So though a great evil was destroyed, his myriad offspring created following his death spread greater destruction and horror.

I greatly appreciate the metaphor.

We see this effect all 'round. It is the Hydra-headed monster, it is the morcellation procedure which spreads cancer as it removes it; it is the ball of mercury squashed into hundreds of new ones.

We may feel victorious in our targeted "hits", but we are animating all who follow, all who wish to redeem their fallen comrades, carry on the torch or just maintain their pride and their principles (though we might not identify the behavior as such.)

In physics, I believe we behave like the Majorana fermion, a subatomic entity that is its own antiparticle; it self-destructs by spinning both ways.