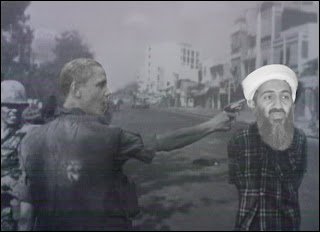 When Smith attacked Mr. Clutter
he was under a mental eclipse,
deep inside a schizophrenic darkness
--In Cold Blood, Truman Capote
________________

February 1, 1968, B. G. Loan, Chief of the Vietnamese National Police, executed what was a guerrilla, Vietcong soldier or terrorist (take your pick, as this designation is irrelevant to this discussion.) Whichever, the recipient of General Loan's attention was shot dead on a Saigon street corner.

This was called field adjudication at the time, and in a perverse way this shooting was understandable and strangely appropriate. The killing was done in hot blood during a period of extensive combat.

However, this photo was a galvanizing moment which enabled the U.S. to pivot against the war. From 1 Feb 68, there was not a chance for the U.S. to win the war in Vietnam. Even though the execution was explained as a consequence of guerrilla activity and war crimes and due to a pervading wartime mentality -- despite any possibly legitimization of the act -- the pure violence was a turn-off to the American public.

The stark reality of the brutality was the final straw which broke the American voter's backs. That one death symbolized the futility of the shooting match in a black-and-white manner, in a way that no amount of debate could achieve. Gen. Loan's photographed action was the beginning of the end.

That was 43 years ago, and now we allow a U.S. president to issue a death warrant without anyone blinking an eye. In 1968 the U.S. public recoiled from the sight of a naked street-corner execution; in 2011, we exult at a presidentially-ordered murder of a thug in cold blood, no better or worse than a VC member on some Saigon street corner.

Why the recoil then, the approval now? The only difference is that Loan had the stones to pull the trigger himself in broad daylight. Why do we glorify a once and future president when both are akin to cold-blooded killers, something we once found so repugnant in the not-so-distant past?

Are we so disconnected from our national policies that we accept this violence in passing as business-as-usual? What does it mean to be an American today vis-a-vis war and assassination?

The lesson from Loan's/Obama's assassination is that any government with a tenuous hold on a situation will resort to desperate acts. Though the South Vietnamese restored short-term order via brutal tactics, NOTE: Saigon no longer exists.

When regimes execute people on street corners the end in nigh. Gang-style executions are symptomatic of bankrupt policies. If the U.S. was being successful, it would not have to resort to such activities.