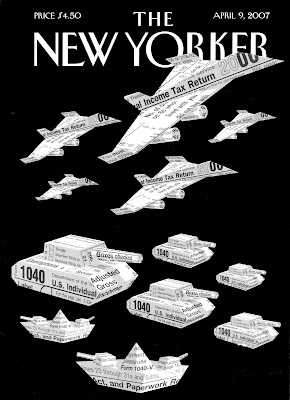 
What a great New Yorker cover (4/9/07)--your tax forms, folded up as lovely origami tanks and warplanes. Just ship it off, boys.

Here's a story that doesn't get too much play. It's yet another indictment of the hypocrisy that we call Operation Iraqi Freedom.

U.S. tax dollars are building Iraqi businesses and boosting their economy, but instead of reaping any publicity benefits from the endeavors, U.S. officials stress that the effort will only work if the U.S. contribution is totally ''invisible,'' this ''given the hostility toward the U.S.'' (''These Raids in Iraq Look Real, But They Aren't.'')

So part of what the U.S. forces are tasked with in this phony war on terror is staging phony raids in order to help those Iraqis ostensibly on our side to be made to be seen as though they are really phony U.S. enemies. Got it?

This is a make-work program from the Americans, who are hoping it will also ''keep otherwise idle men from joining the insurgency.'' As well, the Iraqi component of this project stressed the importance of keeping the U.S. role secret.

This subterfuge and hiding of the U.S. involvement is a charade, and indicative of U.S. efforts in Iraq. Call it a certain lack of transparency--a quality this administration in uniquely qualified to export. The Iraqis are more than happy to take our dollars, but they disavow all contacts with U.S. forces. In effect, they love our money, but not our presence. What a great war!

In recent days, meanwhile, U.S. forces staged a raid to solve a nettlesome -- and potentially life-threatening -- problem in the nearby city of Bayji.

An Iraqi who worked as a translator for U.S. forces there was getting death threats from insurgents and asked the U.S. for help. The Americans responded by raiding his house, publicly arresting him, and holding him in jail for two days.

"A lot of people there now think he's a bad guy," Capt. Cederman says. "It bought him a lot of street cred."

If the only way an Iraqi can stay alive after dealing with the Americans is to be subject to a phony raid to make him look like a ''bad guy," it seems obvious the bad guys are calling the tune.

by Jim and Lisa

posted by rangeragainstwar at 5:47 PM