RANGER AGAINST WAR: Deconstructing the Constructions < 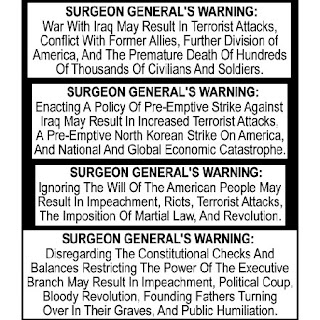 A recent editorial by former National Security staffers (A War the Pentagon Can't Win) shows some of the prevailing misunderstandings of the Iraq War. Ranger will debunk a few of them, as he sees it.

"Mr. Rumsfeld, who viewed special forces as the keystone of a transformed 21st-century American military, could not keep on track a mission that would have stunned Al Qaeda."

Stunning an adversary is meaningless in warfare, unless followed by a killing blow.

The writers cite successful counterterrorism operations, like the Israeli raids in Entebbe, Uganda; Tunis; and Beirut, Lebanon, in the 1970s and 1980s, and Germany's 1977 Mogadishu raid of 1977 freeing passengers on a plane hijacked by the Baader-Meinhof gang.

But the German example is comparing apples and oranges. The '77 raid was conducted by the police function GSG-9, since the hostage-takers were criminals, though it was conducted with military precision and tactics. The event is not comparable to hunting down Osama bin Laden, as it was a distinct event, and not a military action.

Note: The Federal republic of Germany never subverted democratic principles when dealing with terrorist threats. All police and intelligence functions operated with the purview of their constitution.

How ironic. The U.S. today has co-opted some of Germany's pre-democratic policies in regards to citizen surveillance and war conduct. Seeing as how Germany today has been forced as a nation to rectify their conduct and to strictly abide by the policies of a democratic constitution, there is hope yet the the new fascist state of America may get back on track.

Let us hope we can manage it before enduring such a come-down.

This is where the public gets misled, and why so many are still confused as to what constitutes a police/intelligence action against criminals (terrorists), and what constitutes a military action, one therefore requiring a correct military response.

"Senior officers. . . view special ops outside a war zone as something to be avoided at all cost."


Wars are not fought outside a war zone, using the military. Ex vi termini.

"The record of a small, vulnerable C.I.A. paramilitary force in Afghanistan in 2001 was more impressive. The group’s audacious reconnaissance work and direction of local warlords in action against the Taliban provided the most significant battlefield success of the post-9/11 period."


Of course, this is cited as a glorious moment for democracy since these local warlords are criminals and generally sympathetic to Iran. These same warlords are the present drug lords of Afghanistan. Now that's a great presto chango! And for our next trick. . .

"We have failed in Pakistan, and are failing in Iraq, to achieve a primary aim of our counterterrorism policy: preventing Al Qaeda from acquiring safe havens."

Why deny them safe haven? Keeping them in a geographically isolated mountainous distinct area is much better than their being in France, Spain or Saudi America.

"When the inevitable American drawdown occurs, we will need a way to keep the terrorists off balance in Iraq and to disrupt the conveyor belt that is already moving fighters to places like Lebanon, North Africa and Europe."

Keeping terrorists off-balance is a phony unsustainable policy that wastes U.S. assets. That's their job--to be wily. Good intelligence work that prevents them from entering the country is a much more realistic policy.

Ranger does agree with the writer's conclusion:

"With a small fraction of the resources that Pentagon has for special operations, the C.I.A. could develop the paramilitary capacity we profoundly need."


The CIA should possess this function only because Congress has oversight. Until the Department of Defense, SOF came under congressional oversight and until they stop operating unilaterally, then they are more of a danger to U.S. policy than they are a useful tool.

Rummy and Gates should never be given the option to launch SOF forces into any country without congressional approval. That is, unless it is a real war.

The Phony War on Terror (PWOT) is not.

posted by rangeragainstwar at 6:47 PM

I love your SG warnings....how I would love to post them permanently to a blog! Unlike the PWOT, they ARE stunning and COULD constitute a death blow....at least to Bush Co.

This is why kings of old were afraid of pissing off minstrels and bards, isn't it?

Yes, if this cartel had any (aesthetic) feeling, they would understand these things.