RANGER AGAINST WAR: Dick and Dynamite < 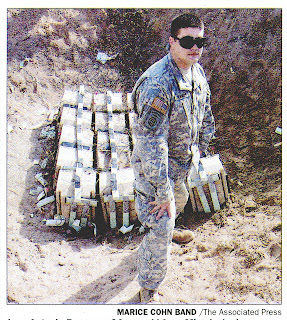 If you can't fuck it up, then blow it up

The problem in defense is how far you can go without destroying from within what you are trying to defend from without
--Dwight D. Eisenhower
_________


Ranger Question of the Day:

Why is this soldier profiling in front of a primed explosive charge?
This is a major safety violation.

This photo accompanying an article on computers (Soldier Uses Web to Stay in College) caught my eye.
It shows a young Airborne enlisted combat engineer in front of a cache of explosives that is about to be blown up. Ranger assumes it is ordnance being destroyed, since MRE's can be destroyed by eating them.

Look at the amount of explosives being used to destroy this cache. It is the old Special Forces formula "P", which means plenty! If these boxes were stacked on a grid of four, four pounds of C4 on top of them would do the job very nicely. In fact, one pound would probably do it, but it is best to be safe and to use more than enough.

But christ, this is a stupid waste of expensive explosives. Why not simply detonate the captured/old ordinance with a kicker charge?

Additionally, the charges are placed in an amateur fashion. The charges should be on top of the materiel, in order to blow it into the ground. The idea is to destroy the materials, and not to spread it over the countryside.

To the reader, this may seem a picky point, and it is. This picture shows that the elite 82nd Airborne doesn't have the experience nor the state of training that is required of an elite unit.

Further, the picture clearly shows why this war is out of fiscal control. In this one random photo, the waste of war is clearly shown. All one has to do is look at the picture.

posted by rangeragainstwar at 11:47 AM

Hi I read regularly here (and at Fixer's and Lurch's), but rarely comment here (unlike the other sites!), but I must say I am glad my beer was safely on my desk with nothing in my mouth, when I read this post.

i was somewhat legendary in my AO for the things i could accomplish with foogas. couple drums of foogas, a judicious application of C4 and poof! no more ammo or fuel dump on the trail. i was also hardcore about things like not blowing myself, or any of my guys up with that shit. but then, i was flat oldfashioned when it came to concepts like muzzle discipline and the like.

Glad to have your readership. Jim does have quite an aesthetic sense about him.

I must defer to Jim, who is not here, for comment on foogas. If you do it half as well as your lemon curd, I'm sure you're right champion at it,

Perhaps a bit too much C4, and yes, it could have been placed more elegantly, but then the dude is from the 82nd and they do have a reputation for artful enthusiasm in place of basic common sense.

Enlighten me if you will. It's been awhile. My recollection of foogas is that it was used for base defenses. A drum of jet fuel dug into a bank so that it blows outward and away from the base when detonated by C4 and a clicker detonator. Turning a ground asssault quickly into crispy critters.

Your use would certainly do the trick though. Probably were a few more uses too.

I remember foogas as jellied gas similar to napalm. It was usually locally manufactured by mixing FELS NAPTHA soap with the gas. A claymore was a good method of detonating and spreading it in the kill zone or defensive perimeter.

A wp grenade in front of a claymore would effect the same thing on a smaller scale. Infantry troops could carry those items in their rucks. In a night ambush this would illuminate the kill zone and add more shock power to the ambush. But it also killed the night vision which is not a good thing. Pick your poison.

Additionally since we're tripping down memory lane, it was wise to daisy chain the explosives for a single detonation with grenades tapped to the det. cord with pins pulled and spoons taped with the det. cord under the spoon.

The explosion then cut the spoon, thereby arming the grenades which then eliminated any survivors who went to ground. Same idea putting mortar rounds in the daisy chain hanging from the trees. None of this was as easy as it sounds.

I only have one comment. My son is currently with the 82nd in Iraq. You have just insulted adn judged him and many other fine young men and women. You were one of them once. If you truly were Special Forces you took pride and character to heart. You took a moral obligation to protect the men with you and the people in this great county we live in. This county is what gives you the honor and privledge to blog and feel as you do. I amazed that you have such an extraodinary abiiity to judge the entire 82nd Airborne Division by one photograph.

I am sad you feel this way. I wonder how your parents would have felt if this would have happen to you. When my son was home in April the one thing he said to me "Dad, you have no idea, the news dosen't tell all the good we are doing."

Just as an FYI, yes I too am an Army veteran (1966-1970) and no I was sent to the middle east, like my son. I respect your service for our county but, like I said sadden by your blog and comment.

I will pray for you and hope you will pray for my son and his buddies for a safe retrun after the mission is accomplished. Unfortunately yours wasn't thru no fault of yours. Please don't hold that against these fine young men and women that you were so much alike so few years ago.

I know Jim will want to respond to your comment tomorrow.

For me, I can say we have nothing but the utmost respect for our men and women in uniform. Our only concern is that they be removed from needless exposure to harm.

From discussing the photo with Jim, his concern was that the photo demonstrated waste, and a safety violation, putting that soldier at risk.

We discussed the possibility that it might have been a training exercise, in which the overkill in ammo was to allow several soldiers to practice the skill of detonation. But we are not there, so we do know.

Our prayers are with your son for a safe return home,

Note: Ranger rec'd a reply from an irate parent of an 82nd Abn trooper claiming that Ranger is basically a dickhead for criticizing good American troops. Actually, Ranger was simply trying to save lives by pointing out faulty use of explosives.

If criticism is what letter writer "Gary" wants, criticism he shall get: A combat engineer platoon in the U.S. Army habitually operates with infantry units as attached/ OPCON to the supported units. This is because the Combat Engineers have trenchers, backhoes and bulldozers that are used to dig defensive fighting positions(Remember that Combat Engineers are distinctly different from Construction Engineers.)

Since the CE have these assets, then why weren't the explosives to be destroyed placed in a deep hole with a backhoe? The answer is: Somebody was too lazy to lay on the equipment, OR the equipment operators are guarding Iraqi cross walks and/or being improperly utilized elsewhere.

My daughter served in the AL Army N.G. as an MP. She did so at my encouragement and guidance prior to Gulf War I.

Yes I was and still am Special Forces, but this does not make me a "propaganda tool" or suck up to the present criminal presidency.

Yes, Ranger judges the entire 82nd from a single photograph; that is what an analyst does. Did the administration analyze a single photo before illegally invading Iraq? Photos are a slice of reality.

Yes, Ranger has a moral obligation "to protect," and this applies as my military duty as a retired officer with experience in this arena. This country doesn't give me anything that hasn't been earned through my service.

Yes, Ranger has judged the entire 82nd Airplane Division and the entire military from one photo, and found them lacking. If 60 lbs. of C4 are used when one lb would suffice, this is a wonderful microcosm of the entire fucked up mess.

I'm sorry that you are sad for how I feel. As a veteran yourself ("if you truly were"), you know the gig. Just hope your fine young son won't have the same problems with the VA that Ranger knows you experienced, along with all of the other vets.

If my writing makes you sad, then keep your head in the sand and don't log on. As for your prayers, please save them for our soldiers. Ranger is beyond your prayers.

I made my choices and played the game. The same is true of your son. He (and you) are willing to die, be maimed and/or psychologically scarred by his military participation. This is your choice.

If Ranger had any prayers in him, they would go out to all the sons and daughters of America. The Iraq and Afghanistan wars are stealing our children, and they are led by a phony pied piper only fit for the company of rats.

The troop pictured had no weapon or body armor. Is he at summer camp?

Nice post which It shows a young Airborne enlisted combat engineer in front of a cache of explosives that is about to be blown up. Ranger assumes it is ordnance being destroyed, since MRE's can be destroyed by eating them.

Look at the amount of explosives being used to destroy this cache. It is the old Special Forces formula "P", which means plenty! If these boxes were stacked on a grid of four, four pounds of C4 on top of them would do the job very nicely. In fact, one pound would probably do it, but it is best to be safe and to use more than enough.Thanks a lot for posting this article.

Jeff,
why not just daisy chain them?
jim

To all,
it would hv been more wise to place kicker charges directly on the explosives being destroyed.
this would insure sympathetic detonation.
Take out the fuses and put c4 in the cavity and daisy chain them.
In a deep hole.
jim

Thank you for your interesting and informative blog. I have enjoyed reading it and appreciate the work you have put into it. Here is some relevant information for you to review
Army Dart Gun Combos