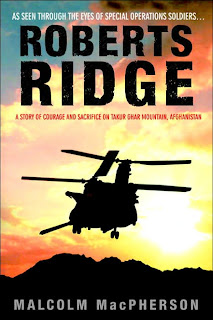 The wastefulness in excess explosives seen in a recent picture (Dick & Dynamite), and a recent meeting I had with the father of Sgt. Bradley Crose--one of the first three Rangers killed in the Shah-i-Kot battle--brought to mind a small section of the book Roberts Ridge, about the battle on Takur Ghar mountain.

As in Bowden's book Black Hawk Down, we are given the picture of Special Operations Forces caught up in hubris and poor planning.

This fight took place 4 March 2002 in Afghanistan, and lasted 17 hours. Rangers, SEALs, and Air Force SOF all fought in this engagement ,which took place at an altitude of 10,240 feet.

The SEALs were inserted on this key terrain to provide fire direction to interdict enemy movements during "Operation Anaconda". The insertion on the Landing Zone was done without a proper visual recon. A gunship indicated that nobody was near the LZ, and no U.S. personnel actually eyeballed the terrain prior to insertion.

Standard procedure is/should be to do a visual recon (VR) of the proposed LZ. Though an infrared scan indicated there were no fighters present, this proved inadequate as they were deeply dug in. It is yet another example of over-reliance on technology.

A good rule is, if there are bunkers present, do not land helicopters within their effective kill radius. It is so simple, even a retired Ranger understands it.

Next, a Quick Reaction Force of Rangers was sent to secure the LZ and to rescue the initial assault element.

The chosen LZ--Shah-i-kot--is key terrain and defensive ground for the Afghan fighters. The area served them against Alexander the Great (321 B.C.E.), British colonial troops (1840's) and against the U.S.S.R. in the 1980's. The Russians lost 250 soldiers in one day near this area.

Following are some excerpts and quick thoughts, as they arose, from the book. Following these are my perceptions:

"Defenders of the Shah-i-Kot had never tasted defeat. The tunnel and cave systems in this area are 165 years old."

"Over flights of intelligence-gathering warned of American interest, if not their intent."

As for the QRF, their mission changed after lift-off, and "with no time allowed to stop and conduct deliberate planning. . . Coordinating would have to be done on the fly."

"The ambush shocked the QRF and crew, but the enemy fighter's true shock must have been greater--that their enemy had sent a third plump target down the sights of their guns."

"The QRF was caught in an ambush in a sub-zero environment, and their air at an altitude at which no Ranger--indeed no U.S. troop--had fought before."

The M-134 mini-guns on both shot down helos would not work after being shot down. The guns required electricity to function.

"(But) true cooperation, they were finding, went only as far as unit loyalties, when the stakes were this high."

"No one commander had been given authority to issue orders to everybody else."

The enemy dead were seen to be wearing plastic shower shoes. "The minute you don't respect your adversary is the minute you are going to die.

The Ranger QRF leaders generally had to beg to get a medevac to their location.

The Special operations Forces Chinooks cost between $30 and $40 million each.

"Regardless of the virtues of the men, [Air Force pilot Lt. Col.] Milani said, "The mission was obviously not a success because MAKO 30 never got in. [Milani was tasked by JSOC Commander Gen. Dailey with chronologizing the event.] They became the focus instead of Anaconda. It was an unwanted distraction. Al-Qaeda soldiers--probably no more than 25-30 of them--died on or around the peak. The loss of seven Americans was not a fair trade. "


[1] The enemy fighters killed seven Americans shot at least $60 Million worth of helicopters out of the sky. What a tremendous loss of life and money for no gain. Afghanistan remains a situation of throwing good money after bad.

[2] The SOF in this fight were not included in the fire-planning of Operation Anaconda taking place in the valley areas. There was no dedicated direct or general Support Artillery, nor was there any designated General Supporting Reinforcing.

Simply put, the SOF fighters were to rely totally on Air Force weapons delivery, which is most precarious in close quarters combat. All Air Force munitions were delivered on a danger close scenario.

[3] The enemy fighters were definitely standing and fighting. These personnel were probably Chechens, and not native Afghans. These were hardened infantry-type soldiers. Note: Ranger did not and will not call them "terrorists."

[4] Loosely planned, on-the-fly operations cannot be successful against determined foes. Technology will not be a force multiplier without proper prior-planning. Sorties must be preplanned. Same for resupply and medical evacuation.


It is not the bravery and courage of the engaged U.S. soldiers which is called into question, for that met the gold standard. These military personnel were of the very same high calibre that is a longstanding tradition of the armed forces.

Rather, it is the operation itself. And extrapolating from that, the entire Afghan and Iraq project. It is never the common man, nor the soldier, at fault. rather, the powers that run these two entities.

posted by rangeragainstwar at 12:10 PM

Read not a Good Day to Die and Pete Blaber's The Men, The Mission, And Me. Both books give explanations of what went wrong, explanations from men who were THERE. Pete Blaber at one point was in charge of the whole operation till his authority was taken over by a 1 star airforce general (Dailey). Pete said they didn't need or want men in the valley or SEALs on the mountain.

Thank you for these two sources. As I have not read them, what is your take on them, vis-a-vis this post? Do you feel explanations and excuses mean the same thing for these writers?

RAW is opposed to the imposition of a corrupt, non-representative government on a medieval country. We can occupy every hill and valley and for what? Drug lords and warlords, far as Ranger can see.

Thanks for writing as you are obviously knowledgeable in the arena of SpecOps. I'd like to hear your take on the RR scenario, or any part of the shooting match.