RANGER AGAINST WAR: Scars of War < 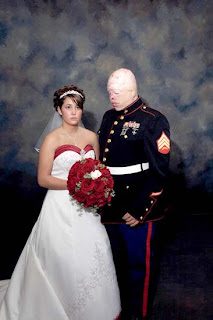 Ranger wants this post under the heading, "Blowing smoke up our asses and calling it sunshine."

People ran the story big last year. This time, just a blurb. Ty Ziegel is getting divorced, less than a year after his marriage.

Ziegel, 25, is the USMC Sergeant who was seriously injured while serving his second tour in Iraq in 2004.

Following a suicide attack, Sgt. Ziegel lost his left forearm and of three fingers of his right hand, was left blind in his right eye and sustained widespread severe burns that led to the loss of his ears and much of the tissue on his face. His shattered skull was replaced by a plastic dome, and his disfigured face was constructed from scratch with salvaged tissue, holes left where his ears and nose had been.

Ziegel and his sweetheart, Renee, were much feted by the press. Even Oprah gave her imprimatur November of '06. It was the feel good story of the year -- the Triumph of Love, as Times Online hailed it.

But this is no feel good story, and the terrified and remote look on the bride's face told all. As the photographer, Nina Berman, said, "It's a standard wedding photograph, but something's different. The war is affecting our rituals, our daily rituals. Look around."

High divorce rates for combat vets is not news, but what is especially disquieting about this story is the way in which the media molded it as proof that everything is going to be alright. Almost all of the fraternal military magazines hopped aboard, running standard copy on the victory of love. Propaganda a la pretty Jessica Lynch, the Barbie who went down fighting to her last cartridge. Not.

Now the reality divorce is biting Ty Ziegel on his ass, and none of the fraternal organizations are doing a follow up. That is left for page 92 of 12/17/07 People. Pity to run it so close to Christmas. These trains don't always run on time though.

Sgt. Ty Ziegel has outlived his propaganda value to the war propagating elements of our grateful nation. He proves yet another failure for this war enterprise.

Girls may "Like A Boy," until he is no longer GQ material following a bomb blast, that is.
Ranger wishes a happy life to Ty. He deserves it.

posted by rangeragainstwar at 2:10 AM

Long-time reader, your blog is my wake up reading each morning for this 53 y.o. nurse.
I'm not surprised by Ty's divorce. The look on her face spoke volumes is exactly what I thought when first seeing it in People.
I participate in soldiers support groups and have been sending flat rates and letters for 4 yrs. Reading the letters/email from overseas and 'walking' with these brave young men and women over many months has been nothing short of an incredible journey. My heart goes out to their families and loved ones. How each soldier deals with the changes within themselves upon re-deployment is individual. The Army can train soldiers to fight as a unit, obey orders, complete mission first, but the Army cannot dictate or control how each soldier processes grief and loss. Loss of friends, loss of heart, loss of limbs and body function, loss of youth and innocence.
Each soldier must face these losses and carry on, hopefully with the help and support of those who love him/her.
Thanks for continuing your blog and Merry Christmas to you and yours,
Cathy B

Thank you for the important work you do, and Merry Christmas from us.

As you say, the veterans reacclimate, "hopefully with the help and support of those who love him/her." Not always a given, eh?

Strength to you in carrying on your work,

while i certainly can't fault the young woman for bailing out, i applaud her for simply trying. one of the things that i found disturbing after one of my woundings was the way i was treated by my comrades at the strand. it was almost like they were afraid that my crutches were contagious. then it occured to me that while they were busy trying to train to go into the warzone, i was a living, breathing, reminder of some of the consequences.

and yes, while in many cases there is a maimed body, there are also the deeper, emotional scars. in many ways they are the toughest to deal with because nobody else sees them. i've tried explaining to folks how having to caution overnight guests that they should leave the room if i start to speak oriental langauges in my sleep, can really put a damper on one's sex life. it takes casual right out of the equation.

things have mostly gotten better with time. that is, except the stuff that got worse. . .

best wishes for the season to ranger, lisa, and all the crew.

Last year, I looked at the shell-shocked expression on that young woman's face and thought "No fucking way this is going to work." It made me very, very sad....and it doesn't make me feel better that I was right.

Ranger would suggest that you stick with oriental women.

All the best is wished to you and yours this holiday, and on into '08, minstrel boy.

Our thoughts, too. The photographer Berman witnessed the same absence of presence in all her wedding shots.

Sigh...I remember wondering just how this story would play itself out. No real surprise to me. Unlike young Ty, I met the girl I ended up marrying and with whom I'm still with, after having been to war. Went again after we got married, in fact. And we talked about these things at great length before we did the deed. At least she saw me as I was—not physically disabled, but certainly not the sweet young boy from the senior prom—and didn't have the childhood sweetheart baggage, meaning there were no illusions.

We all change in war, something our government and many of the elites in our society will move mountains to deny. After all, if every young man and woman really knew the truth, how could we have any wars? Whether you get physically disabled—as my dad did in WW2 and some friends did in my war—you just are never the same. The older I get, the more I appreciate this. Vets aren't necessarily worse people; in fact, there is a great deal of evidence suggesting otherwise. But they are changed forever. It's not a job; it's an adventure. Right.

I truly hope there is a happy ending for this young man, as well as for his former sweetheart. I'm not quite sure what any of us can really do for them and others like them, other than to keep telling the truth. And, importantly, do whatever we can to make our government live up to its promises to them. Unfortunately, the track record there isn't very good.

My hopes that Jim, Lisa and the others who frequent this very nice blog, have a very happy holiday season and move into the New Year on a high note. My wishes for Jim and Lisa are that they continue with the good work and that their readership expands exponentially in 2008.

What a fine statement:

"if every young man and woman really knew the truth, how could we have any wars?" How true.

Thank you for your excellent good wishes. Merry Christmas to you and a Happy New Year. We are glad to call you friend and to have you as a reader. This work continues, and speaking for myself, I am looking forward to a rockin' '08!

All the best, Publius.

As former medical lad tech/ volunteer, I have thought a lot about this subject after reading about the amazing things the modern MASH units can do these days. Saving lives and leaving a shattered life. In our culture, those of less than optimum beauty are not accepted, OK, are avoided, by most people. Like injuries are contagious. The movie "The Man Without A Face" makes this point well.

Anyway, I live in an area largely inhabited by asocial and rejected people. Yeah, that includes me. So I really expect for an Iraqi survivor to appear up here anytime. Which lead me to think about what their being mutilated means. They go from a hale and hearty person to a shunned and disabled person. Quickly. Their entire life is overturned: no future employment prospects, [usually] no SO, probable permanent health problems, no emotional support system, and nobody really cares enough to help in the long term unless they're getting paid. I only hope I can be able to help if given the opportunity, in the sense they will accept my assistance. Pride can be a problem, as well.

While long-time rn has a point about the soldier's attitude, the problems are so large, few can manage alone.

Exactly--society does not know how to deal with its outliers, so you have ostracism and outcasts. [Even though you count yourself in that number, I welcome you into our community, and wish you a Merry Christmas.]

Reading about Mr. Ziegel, I found that many other guys who are disfigured in combat will preemptively push their friends away, so as not to have to suffer the pain of rejection. (Of course, many fools behave this way even without recourse to trauma as an excuse.) This is all unbearably tragic.

I hope you have had some support, and I also think it would be wonderful if you were able to provide that support to another. You seem to understand the pride which would also try and reject the outstretched hand. Of all the tragedies surrounding war, this is the one which leaves me the saddest.

I'm just surprised they went through with the wedding. Were they egged on by the media? And what of this girl's friends and family? Didn't anyone try to get her to see the light? Or, what about his family and friends? Couldn't anyone else see this as a recipe for disaster?

This poor guy clearly wasn't in the kind of shape to offer himself as a proper husband/provider for anyone.

Yes, just another Jessica Lynch story the media tried to foist on the American public!

A very sad story, no? The media is a very powerful force, and has shown itself to often not been a force for reason throughout this Afghanistan / Iraq fiasco.

This, like all weddings, came with the flowers, the silk and bridesmaids. And like so many, the seed of failure predates the walk down the aisle.

But in this case the Oprah-style coverage seemed blatant exploitation, when their story might have been used to illustrate some very harsh and very ugly truths. Sadly, when the marriage failed, the story was dropped.

"Just another Jessica Lynch story the media tried to foist on the American public!" Yes.