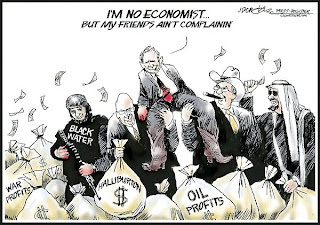 All I can remember now
Is little kids without no shoes
--The Pogues, The Sunnyside of the Street

I place economy among the first and important virtues,
and public debt as the greatest of dangers.
To preserve our independence, we must not
let our rulers load us with perpetual debt
--Thomas Jefferson
_______________

This week yard work and earth moving were the order of the day. The story is the economy and the earthmoving company.

Owner Barnes Malone said things are so slow and fuel costs so high that he has had to let go all but two mechanics and three field workers, this from a normal crew of 20 field operators.

A separate business of his is selling hay. He works about 5,000 acres here in North Florida. The cost of fertilizer and fuel ran hay up to $8-10 per square bale this year. Two years ago, hay was selling for $3 a bale.

He now sells all hay locally as transporting is not economically feasible. In the past, hay was transported in a circuit from Florida to the Ohio Valley, and vice versa, providing for a variety of grasses in each market.

Think about those grass roots the next time you eat beef.

Addendum: Manhole covers and street grates are the new hot commodity amongst those looking to make a quick buck in scrap Metal. In Philadelphia this past year, 2,500 covers and grates have been stolen, compared to 100 in the previous year. The same trends are seen in other metro areas.

posted by rangeragainstwar at 10:38 AM

People under-estimate just how badly the increase in fuel and fertilizer costs is rippling through our economy. It would not be a big deal if the ayatollahs and sheiks were buying stuff from America with the dollars we are sending over there by the bushel-load. But they're not. They're buying stuff from the Chinese with those dollars, which the Chinese are then sending back to buy more oil. This is causing inflation in China, and deflation in the United States -- but a strange sort of deflation, which makes the cost of goods go up and up, but makes peoples' incomes stagnant so that everybody's income is essentially declining. Call it "stagflation", if you will. Just don't call it "recession", because Dear Leader's pet economists will slap you over the wrist with a limp noodle.