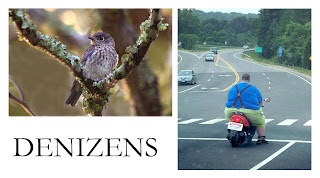 I got a whole lotta kisses for you
--Whole Lotta Lovin', Fats Domino

Idle hands are the devil's playthings

Where Ranger is more nuts (and bolts), Lisa takes a more holistic view of world events, with a particular interest in evolutionary biology.

Forgive the juxtaposition; like we've said before, it's not all guns and roses at Ranger. Sometimes, we must show you the ugly (under)belly to capitalism. While perusing the photos on the desktop of a photographer friend's computer, the above two photos by chance were side by side. I could not fail but make the connection.

The picture begets the question: How fit are humans for their environment? Birds have always seemed like such staunch denizens of the air, always industrious and vigilant, and they sing when Spring comes. But humans, not so much.

Now, many of us are carrying around a few extra pounds, but we are talking something else here -- morbid obesity. Recent statistics say one-third of your fellows are clinically obese; 63% are overweight. At some point, one must say, that is one Mars Bar too far; na ga da. Up to one-third of children and adolescents qualify as overweight. Is there not enough to do in their world?

Some say obesity is a "disease triggered by a food-rich, activity-scarce environment in people who are genetically susceptible to weight gain" (The Obesity Crisis: Americans' Bodies are Out of Balance.)" Pretty much all of us will pack on weight if we indulge in rich foods and don't move much. As adult-onset diabetes is triggered by a lifetime of eating a high-glycemic index, high sugar diet featuring a genetic predisposition, then so is obesity triggered by partaking in "food-rich and activity-scarce."

That is not to say eating well is easy, and high carb/high calorie fare is often cheap. And if you are working a factory job standing in line all day, that doesn't offer much opportunity for overcoming "activity scarcity." Part of the answer may be a workplace revolution which recognizes the benefit to having fit and energized employees. We eschew the regimentation of the Japanese workplace, but maybe some morning Tai Chi might help matters.

A sign at my orthopedist's office says, "If you are over 350 lbs, please do not sit on the chairs." I asked why, and the receptionist said it was a liability issue; a chair had collapsed from beneath a patient, and they wanted to avoid a future incident.

These patients are having joints replaced and ligaments repaired. Can you imagine the strain on those hinges? As I sat and watched, I observed many came lumbering in like the character Hurley in the t.v. show Lost, or in wheelchairs. My sympathies go out to all in distress, but I wondered, what is happening to allow this avoirdupois?

These souls will not be captaining a militia anytime soon.

Milo's up with a good one.

There seems to be quite a few people out there promoting what I just now decided to call the Obese Agenda. There is an unwritten rule in our society that says you MUST intervene if people are killing themselves with drugs, alcohol, firearms, etc, but that you must say NOTHING if they are doing the approved slow-motion suicide with a knife and fork. I'm a hospital cardiac nurse and I deal with the results of obesity on a daily basis. It ain't pretty.

Yes, it's harder for the poor and uneducated to make healthy choices, but that doesn't mean that they are so stupid and clueless that they can't. Also, this obesity thing is hardly confined to the lower tiers of society. The hard truth is that many people are just too freaking lazy and self-indulgent to expend the effort it takes to stay in shape. If it was easy everybody would be fit, the trouble comes when it requires a change of lifestyle. Just look at all the tv shows about eating. There is even one now hosted by 2 fat guys who only eat stuff like overloaded cheeseburgers and deep fried everything. Somebody is making a lot of money from people living this way. I don't buy the genetic argument. If that was the case why was childhood obesity in particular so rare back when I was a kid in the 60's. There was always about one "fat kid" in every class and that was it. So the genetic predisposition is probably far less prevalent than some would have us believe.

Thank you for Milo's post. It is quite profound and extremely moving.

Well, you have a front row view of the problem. I do not buy the genetic argument, generally. It is definitely lifestyle, and our society promotes stasis.

Everyone must be pathologized, so the obese are victims of "food-rich" environments. Why not stop making your pantry food-rich by declining to buy those pork rinds? Instead, the doctors are more than happy to medicate for diabetes, for hypertension, for the plethora of ills which beset the obese. Then, they will cut.

There is so much to do in a life, and mine is not particularly busy, but I haven't any time for t.v. Most of it would bore me to tears, anyway.

In education, they do the same thing. I remember one girl who was particularly, lazy. After psychological counseling, they decided she had a "disincentive to learn." She now had a bona fide excuse, a label.

Isn't that lovely? It is straight out of a George Carlin skit.

I find that anytime we comment on obesity here, we are met with silence. As you say, it is the last frontier on the p.c. agenda to be broken down. Liberals can only go so far. And I believe this is an issue which transcends political affiliation, anyway. So let's say, people can only speak so much truth.

I believe society is entirely complicitous in obesity, which is not to exonerate the hand that directs the food to the mouth.

Finally, I know some people who eat well -- they can afford to do so. But they eat plenty, a whole lot. hence their obesity. So no, it is not good food vs. bad, poor vs. rich. Fatness is an equal opportunity blight.

Hmmmm, just thinking off the cuff here... seems like the Left goes out of its way to enable obesity for fear of seeming biased or discriminatory, and the Right doesn't even seem to have the issue on the radar at all. They have no comment. Fear of offending Rush? What do you think?

Oh, I awoke with a revelation (hallelujah!) on this very topic today. I shall post my conspiracy theory later!

In general, yes, the liberals are too p.c. to declare for much of anything. Certainly they wouldn't want anyone to actually take responsibility for their situations, for that would be to burden them unduly with blame which could surely be placed elsewhere. It is all very Hegelian, and liberals at their worst can be a bunch of whiners.

Conservatives as we know are rigid, so per the topic of obesity, if you're fat, well, you're fat. You've got the genes, your momma was fat, etc. Pass that red eye gravy along. . .

In a sweeping generalization, they tend to watch the two fat guys and the woman who cooks with two stick o' but-tah as vindication and role modeling; liberals tend to see it as humor.

I think most people would like to accessorize and nip and tuck rather than commit to sweat at a gym. For many, gym is an accouterment. They pay the yardman to do actual physical labor, then drive 10 miles to the fancy gym with the juice bar.