RANGER AGAINST WAR: Catch Me if You Can <

Catch Me if You Can 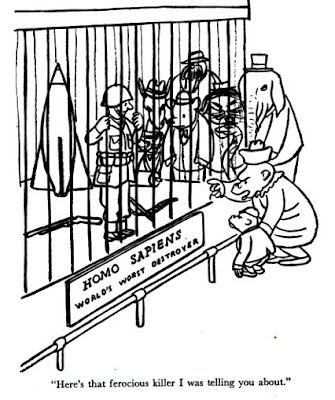 Making love to his ego,
Ziggy sucked up into his mind
--Ziggy Stardust, David Bowie

machismo is not foreign policy
--Obama the Gambler, Fareed Zakaria
________________
The "next great First Amendment battle" will involve muzzling free speech in the case of a man accused of compiling and selling films of dog fights, in violation of a 1999 federal law that bans trafficking in “depictions of animal cruelty.”

Though video maker Robert J. Stevens had nothing to do with the dogfights themselves, his films earned him a 37-month sentence (Free Speech Battle Arises From Dog Fighting Videos), 14 months longer than that of football player Michael Vick who actually participated in the dog fighting, which is illegal in the U.S. (Mr. Vick first denied, then admitted to personally killing a half-dozen wounded losers.)

Two of the films show pit bulls in dogfighting events, and the third, 'Catch Dogs and Country Living,' "shows pit bulls being trained to attack hogs and then hunting wild boar. The encounters are gory and brutal. Mr. Stevens participated in the hunting and filmed parts of the third video, which bears some resemblance to nature documentaries," according to the NYT.

"The law has an odd history. It was enacted in large part to address what a House report called 'a very specific sexual fetish.' There are people, it seems, who enjoy watching videos of small animals being crushed."

When Bill Clinton signed the bill into law, he instructed justice to limit prosecutions to “wanton cruelty to animals designed to appeal to a prurient interest in sex.” He was concerned about First Amendment intrusions, and the "crush" videos are certainly disturbing, analogous as they are to pornographic snuff films.

But these are not crush films. "The law applies to audio and video recordings of 'conduct in which a living animal is intentionally maimed, mutilated, tortured, wounded or killed.' It does not matter whether the conduct was legal when and where it occurred so long as it would have been illegal where the recording was sold." Catch dog hunting, though sometimes brutal, is legal in much of the U.S.

The Times notes that the government has unsuccessfully tried to ban "depictions of violence against people, notably in videogames. But those laws are routinely struck down, and the Supreme Court has never ruled that speech about nonsexual violence is beyond the protection of the First Amendment."

This case illustrates one of the hypocrisies of our legal system: Bad things can happen, but as long as we don't see it on film, in the wrong municipality, all is copacetic. Bad policy on a personal level, but irreconcilable on a legal one.

Gun shops and the Hunting Channel routinely show bloody depictions of animals being gunned down, often suffering terribly before death, by brave white hunters. These videos are often produced by weapons manufacturers, as a come-on to purchase their products.

Why are these productions legal, while Mr. Stevens's is not?

Why not extend the description of gruesome film depictions of the "intentionally maimed, mutilated, tortured, wounded or killed" to the brutality depicted in the war pornography of Saddam Hussein's hanging, or that of the bullet-riddled and bloodied bodies of his sons Qusay and Uday, and Abu Musab al-Zarqawi featured in news magazines like Time and Newsweek?

While not exactly Oscar material, current You Tubes like al Zarqawi is Eliminated -- which panders to the Limbaugh crowd -- show our hypocrisy in action. We like to watch violence. Boxing is an Olympic sport.

Why do we pretend to care about criminal behavior in relation to animal cruelty when our behavior to our fellow humans is anything but kind?
_________________

"Gun shops and the Hunting Channel routinely show bloody depictions of animals being gunned down, often suffering terribly before death, by brave white hunters. These videos are often produced by weapons manufacturers, as a come-on to purchase their products.

Why are these productions legal, while Mr. Stevens's is not?

Why not extend the description of gruesome film depictions of the "intentionally maimed, mutilated, tortured, wounded or killed" to the brutality depicted in the war pornography"
RAW

As far a war pornography I'm all for the real thing. As long a People and Governments look at war through the lens of a John Wayne movie or earn their stripes on Playstation's 'Call to Duty'; war for those who not experienced it loses all meaning. As long as the Puppet Masters hide the reality and obscenities of war, people and their leaders sleep in a state of necessary narcolepsy. For the last 40 years I haven't sleep well......

bh187,
Try kolnopinazem for the sleep problem. It helps.
Glad to hear from a fellow traveller.
jim

Jim,
Thanks for the heads up on the K-pin. I take 6mg a day, 4mg at night, Trazadone, and Seriquil. A half bottle of a single malt use to do wonders, but at my vintage it's not a bright idea. You adapt over time. Taking up night hobbies is a good Idea. Now I don't recommend this for the kiddies, but a beautiful woman and a smooth 'burn', works best for a good nights rest. Great blog. Keep up the fire. And thank you Brother.
BH187

BH187,
I've taken to drinking a Czech herbal liquer before bed and it helps me.
It's called Beckerovka. I haven't fired up anything since 1981.
jim

I agree 'firing up' on semi-auto has it's limitations. I'm googling Beckerovka as we 'speak'. 'Ba Mui Ba' is hard to find in these neck of the woods, known to cure anything but a hangover... ;{>

chris rock had a very pithy something to say when he saw photos of sarah palin field dressing a moose. there was the candidate for vice president of the united states with blood up to her elbows, hauling guts out of a dead moose...

rock thought "and michael vick is in jail..."

as it is with most subjects like this i have absolutely no moral high ground to take with anybody.

i bet (and mostly won) on cobra/mongoose matchups in bangkok's snake alley. i've attended cockfights (they used to be legal in arizona and they are still legal in parts of mexico)

i attend the corrida (it's not a bullfight it's a ceremony, it can be ugly, but also sublime)

speech, all speech, even odious speech must, simply must be protected. i have no problem with being a first amendment absolutist.

i'm not one of the pussy right wing teabagging jerkoffs who think that the only speech that should be free is mine and those that agree with me. while i do tend to speak freely, i am well aware of the consequence of my speech. there are times when the consequence looming has been negative. hell, i've even been known to hold my fucking tongue from time to time after weighing those consequences.

if this is truly a free speech case then the defendant needs to be ready to take his lumps for freedom. that's the often forgotten part of civil disobedience. the willingness to accept, without complaint, the consequence of one's disobedience.

sam fuller (big red 1) was a film maker who made some pretty gory ass movies about war. he said the best anti-war statement he could think of was to try and tell what happens when armed conflicts rise up. if folks new the truth of combat, they'd never send anyone else again. ever.

yup to blackhawk187 and ranger on the sleepless nights. they just happen. i'm lucky enough to be in a situation where i can just ride that shit out and sleep when the inevitable comes to pass.

"i love it, god help me, i love it so..." (that quote from the movie was something he actually said)

"it is a good thing that war is so terrible, otherwise we might become too fond of it." (chancellorsville)

"war is hell, there's simply no sense in trying to pretty it up."

"i have come to understand the terrible arithmetic of the thing."

truly, no matter the cause, seven goddamned years is too long. way too long.

on the tour i'm doing right now, we take a moment where the startype singerlady sings "down by the riverside" with me on the national steel body and a bottleneck. when we finished a few nights ago she told the crowd

"you have no idea how much safer the world is since stevie learned that song..."

For sleep issues, I recommend single malt scotch and Jaegermeister.

i pretty much blame the Reagan years for encouraging blatantly predatory behavior.....

Anon,
I've found Bier 33 in the little Saigon area of Orlando.
Publius,
I've just bought some jager to give it a try.
MB,
I'm fortunate that I can set my own hours .
jim

ANON,
Excuse my thick head, I assumed you meant firing up some kunja ,when you were talking shooting.
Lately I can't even get any stress relief from range work. This used to work for me , but not lately.
jim

RAW,
Careful with that Jaegermeister it will give you a hangover so bad you'll feel like you were hanging from a gibbet for a month. It will blast more holes in your liver than a claymore.

I do however highly suggest a 'Willie' schnapps. My favorite is Poire (pear) William's 'eau de vie', French for 'Water of life'. The Germans must have developed a taste for it during the occupation as it's found in most decent drinking establishments in Bavaria. It's also available in the US.

Careful with the Ba Mui Ba beer. The real stuff should taste like formaldehyde. And was used as a disinfectant by the troops to prevent the clap, and that ain't BS.

BTW, my reference to firing on semi-auto was intended as a pun. ;{>
Keep up the fire,
BH187

BH187,
I'll try the pear drink, water of life . My name translated means -little pear-so this should work out.
As fo the Jagermeister I only drink to go to sleep, I have not been drunk since 81, so I should do ok with any of these recommendations.
I have a hard time spotting puns and am very literal.
Maybe if I hadn't drank the 33 I wouldn't have caught the cl--.
jim

It's not for drinking, but for douching. No wonder you got the pox ;{>