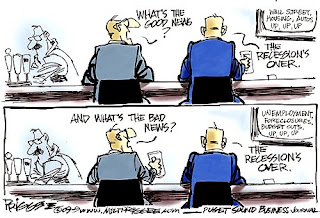 Do not be afraid.

Eighty percent of the people who call themselves Democrats
don't have a clue as to political reality.
Put a little fear here and there
and you can get people to vote any way you want
--James Carville

Carville also said, "If you are on Social Security, Medicare or Medicaid, a baby-boomer, unemployed, a minority, parent with school-aged children, a college student, without medical insurance, balancing your personal budget, not a CEO, purchasing gasoline, wanting clean air and water, a 401-K owner or earn less than $200,000 per year, then voting for George Bush is like a chicken voting for Colonel Sanders." Replace "a Republican" for Mr. Bush and you get the gist.

FSU's local public radio, Morning Edition, yesterday reported cheerily that the economy was improving in the state: The unemployment rate had dropped a whole 10th of a percentage point, from 10.8 to 10.7%. However, that is still a percentage point higher than the national rate of 9.7%.

Last month, Florida lost only about 21,000 jobs. Now that's progress you can believe in. Woo-hoo. Only, as NYT columnist Bob Herbert reminds us, this isn't the whole story (No Recovery in Sight; A World of Hurt.) The unemployment rate fails to figure in those off the unemployment rolls but not yet employed, those underemployed and those who have given up. If these figures were included, the actual number of unemployed would be at least 16-17%.

A recent economic survey based upon spring data shows "the recession has plunged 2.6 million more Americans into poverty, wiped out the household income gains of an entire decade and pushed the number of people without health insurance up to 46.3 million" (Millions More Thrust Into Poverty.)

Over 13% of your fellows live below the federal poverty line. For children, the statistics are more grim: according to a meta study by the National Urban League, almost one in every five children live in poverty.

One of every 140 homes in Florida is in foreclosure. The Good News leads one to ponder the unrealistic nature of U.S. government policies across the board. Do our leaders believe that unemployed people living in foreclosed upon homes are actually concerned about al Qaeda?

When one is living in a tent city, the fact that the Sonitrol is not working is of little concern. It's the economy, the mismanagement of which may yet bring about our worldwide leveling -- not necessarily a bad thing, though a very painful one.

Nation building is just not the important.

posted by rangeragainstwar at 10:49 AM

Nation building is just not the important.

No what is important is to break the nations workers down. That's what we're seeing here. if you have chance read Shock Doctrine. Sad but it's about to happen here to workers like me and it will leave to no one out.
jo6pac

To your last post I just want All of the Girls and Boys home from all the make believe problems the govt and handlers send them to.

My brother-in-law has been out of work since December. He is in management in the building trade. He looks daily and is very qualified; it's just that 50 other qualified guys are also applying for the same job.

We wish them all home safely, too.