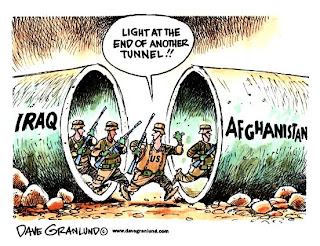 Ranger Definition of the Day:
COIN -- The tunnel at the end of the light
________________
The News Hour with Jim Lehrer recently hosted the two Andrews -- Bacevich and Exum (nee, Abu Muquwama) -- to speak on the war in Afghanistan. Two former army officers, both smart men with different views (interview @ OnlineNewsHour, "Grim Military Report Stirs Questions on Afghan Strategy.")

Exum is now a consultant who gets paid government dollars, and naturally is in favor of the war. Bacevich doesn't have a horse in the race, so his evaluation is not based upon his wallet. One wonders if Exum is now a paid Department of Defense stooge, or if he really believes his line. If he is so dedicated to the cause, why isn't he still carrying a rifle and serving on Active Duty?
Here is what Ranger would have said if he were part of the interview:


Exum says, "What we're trying to do is build up certain key institutions in Afghanistan that we believe will make that country inhospitable towards transnational terror groups." He "believes", but beliefs are unverifiable, subjective and often faulty. We do not share in his beliefs.

He continues, "I think the assessment that we put forward was -- was pretty realistic." In Exum's Counterinsurgency fantasyland, there are gradations of realism. Is there a "pretty realistic" and a "really realistic"? Please define what pretty realistic means -- sounds like a description of historical fiction.

Ranger wonders why this critical Afghanistan report was written by soldiers and government tit suckers rather than the State Department. Shouldn't nation building be a State Department function, or is that even an institution of any relevance in our phony little world?

One must also wonder how a man of brilliance like Bacevich ended up as only an O-6. This speaks volumes about the modern action Army promotion selection process.

posted by rangeragainstwar at 10:28 AM

it's strange to watch how closely we've started to pattern imperial rome.

one of the biggest factors in the demise of the republic was when the senate, and the comitae centuriate decided that a professional, standing army was the way to deal with the external threats.

then, like any good congress, they began to back off of their promises of land for veterans, citizenship for foreign auxiliaries, all the usual stuff.

what happened in rome was that many generals, well, the very rich ones anyway, like crassus, pompei, marius, lucullus, and many others had legions that were not loyal to rome, they were loyal to the general who provided the funds.

others, like sulla and caesar used their legions to make their fortunes. both of them (and sulla was caesar's uncle by marriage, just like marius) had impeccable lineage but little funding. sulla made his fortune in africa, syria and spain. caesar, of course, launched his unprovoked campaign of subjugation on gaul. they both, not suprisingly, provoked long and disasterous civil wars by their actions.

the republic, already reeling from the 15 years of intercine warfare between marius and sulla, could not survive the final war between caesar and the senate. (of course, neither did caesar)

both sulla and caesar had the resolute backing of all the folks who profited wildly from government contracts to supply, arm, and equip the legions.

Ranger, you and I disagree about participating in Exum's web site. You've got your reasons, which I respect; me, I just like stopping by and dropping a turd every now and then, just to get the natives restless.

It's been kind of interesting following Exum recently. He and the COIN faithful are twisting themselves into knots trying to justify the massive commitment to COIN in Afghanistan they so fervently want. But they're getting more and more negative feedback from commenters. I think the Small Wars war lovers are seeing the same thing.

WRT your wondering why Exum isn't out there still leading troops in the grand wars he likes, I've wondered that, too. In fact, I wonder that about a lot of these COIN dudes. Nagl, the chief of that CNAS outfit, recently retired as an 05. Probably had plenty of career left, but he left. You can't exactly call these guys chickenhawks—they've been there—but it is kind of curious to see them beating the drums so furiously trying to get more and more troops into the shit. ???

Bacevich is the best of 'em all. And I'll quibble with you about one thing. He's no more a FORMER Army officer than you or me. He's retired. And as a retired officer, he's never former. WRT him not getting further than 06, I have some sort of recollection that he didn't want to go any further. Given his public attitudes, one can well understand that.

One other noteworthy thing about Bacevich. His son, an Army LT, was killed in Iraq. Bacevich has and continues to pay his dues. I admire him.

Publius,
I meant no disrespect to COL. B by calling him a former officer. As you point out my words do not/did not point out his true status. He's the real deal whatever we call him. I request absolution for my sin.
B. is so clear in his thinking that it's actually a pleasure to read his interviews and articles.
I'm aware of his loss. TRAGIC as is all the deaths whether American or opposition forces. TRAGIC.
As you know Lisa always tries to get me onto the AM site which i heartily disdain. If I do so then i lose the initiative. I call AM the short for ABOUT MONEY.
jim

Publius,
I'd like to add.
Exum and his ilk are classic little lifers- they believe buzz words and charts are reality. They are the masters of peter patter.
They have no idea of reality but they believe that they talk to god daily.
Of this i'm sure.
jim

Ranger: "Exum and his ilk are classic little lifers- they believe buzz words and charts are reality."

I'd add to MB's Roman parallel that one of the many factors that killed Roman republicanism was Senatorial greed. Rome grew large behind a screen of foederati, "allied" polities on Rome's borders that Rome used as tools, buffers and proxies. They were controlled by threat, bribery, chicanery and suasion and it worked pretty well.

But it made no money for the Senate - in fact, it cost money to maintain the Roman clients. Conquered provinces, OTOH, could be made to generate huge sums for rapacious Senatorial procurators and viceroys.

So as the Republic, and then the Empire, "matured", more and more people can under direct Roman rule enforced by those mercenary legions.

Publius & Ranger: Check and rog on the AM crowd, for my money a pack of professional staff weenies unable or unwilling to see the geopolitical forest for the tactical trees.

The dumb fuckers always remind me of the S-3 who informed me loftily in the middle of a field problem that my FDC was incorrectly placed because it was not in defilade in the draw nearby. I looked around to see if anybody was listening and leaned over and whispered to him; "Airborne, sir. But first you just go find the fucking OPFOR guys and ask them to clear the fucking mines that they laid all over that fucking sonofabitch, OK?"

I am very much enjoying Bacevich's book "The Limits of Power" and I think his inconvenient habit of actually knowing something and thinking and saying what is on his mind had much to do with why he only made colonel.

Oddly, I had somehow not heard of his book right away...and when I did, I thought "Wait? Isn't he dead." But of course, I was remembering his son's name from the lists.