RANGER AGAINST WAR: Son's of Liberty < 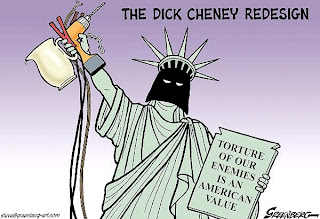 Cause when you're talking to that many people
At one time
You're bound to be lying to someone
At some time
--I Can Explain Everything,
T Bone Burnett
_________________
Americans do not want to face the fact that their everyday soldiers, the sons and daughters of liberty and justice for all, were involved in torture at every level of the Phony War on Terror (PWOT ©).

Talk of torture centers on a few egregious cases of Central Intelligence Agency abuse, and we are content to spin around these tales from the crypt. But much killing and abuse resulted from torture conducted on detainees while in U.S. custody. And, with President Obama's imprimatur, we still do not question the endless incarceration of untold numbers of prisoners held without any judicial oversight.

The U.S. populace is complicit in torture when it ignores any instance of its perpetration. If Congress were serious about stopping torture, they would make it a federal crime to even propose its use.

Ranger's outrage does not lie with the torture alone,but the fact that we tortured people that were not terrorists; we tortured out of meannesss and vindictiveness. We were neither discreet nor discriminating.

The U.S. government is living an edition of Soldier of Fortune magazine, only we are not the fortunate ones.

posted by rangeragainstwar at 8:58 AM

U.S. abuse of detainees was routine at Afghanistan bases:
(Partial Quote)
The brutality at Bagram peaked in December 2002, when U.S. soldiers beat two Afghan detainees, Habibullah and Dilawar, to death as they hung by their wrists.

Dilawar died on Dec. 10, seven days after Habibullah died. He'd been hit in his leg so many times that the tissue was "falling apart" and had "basically been pulpified," said then-Lt. Col. Elizabeth Rouse, the Air Force medical examiner who performed the autopsy on him.

Exactly right and so obvious it makes me cringe. Thanks Ranger as always, for telling it like it is which takes the courage of a true patriot.

Dude... It's a harsh fact in a harsh world. It's hard to choke back the raw emotions and realize the Chicken Hawk Warmongers and their Enablers at multiple levels sent you into a war for profit. And that one bears responsibility for the pain and deaths of others in a Phony War.

And it's hardest on those who have lost a loved one, who want to and need to believe their loved one killed and died nobly and not so criminals could use the Government to siphon off Trillions of Dollars into a UBS Swiss Bank Account.

POLT,
The autopsy report also indicated-HOMICIDE. These were god's children that did this- sometimes they are referred to as Military Police.
As i always say-what's the last two letters of WIMP?
I've always contended that MP's love to dress up and pretend that they are actually soldiers. Hell let's contract them out also.
jim

GeG,
My point is that there are everyday soldiers returned to society that had a real part in this travesty. They are our son's and daughters and we choose to ignore this fact.
And yep, it's all about the bucks.
jim

Back in '95, my late wife and I ( well, she wasn't late then, still with us) got a really sweet gig in Singapore talking to the rich kids' teachers at the American School about what we did for almost nothin' here in our backyard in Albuquerque.Took their good money, gladly, for talking to them about what we used to call "field expediency."
At the end of the job, since we were so close, we went to Vietnam. We needed to spend some of that good money.
Besides, I was feeling guilty as hell about what I'd helped do to the Vietnamese and needed to go on a pilgrimage.
Worked a bit , too, but that's another story

Amongst the collected evidence of our madness ( I know, I know.."They" did it too), was a report of an interrogation of a Vietnamese by the Saigon Po-lice and American MPs. Without looking over my journal entry from that day, I recall that Mr. Nguyen"died, without divulging any useful intel" after having had " X number of 20 penny nails driven into his legs and cranium."

Couple of Sundays ago, I read the accountants redacted, of course, in the NYT of of the enemies of this great nation had divulged "No useful information" after "application of the waterboard 83 times."

I flashed back to the time in 1968 when some grunts brought a prisoner back to the perimeter of our gun positions. They "only watched", observing and advising, of course, while some chickenshit ARVNs held the poor kid down, put an handkerchief or his face and began pouring their canteens into it.

He jerked and fought like he was on fire. All of them roared with laughter.
Skytroopers, too.
They weren’t even asking the man any questions, just flat-fuckin torturing him.
Laughing. Like he was a bug stuck on a straight pin.

I haven’t cried in a long long time, but that article and that memory almost did it.

There's a scene in The Searchers, where the Michael Morrison character (oh..that's John Wayne, our hero , remember?) rides up to where some men are burying a dead indian and whips out his pistol and starts blasting at the dead man. The director of that movie, John Ford, a WWII Vet, knew nothing was sacred and everything was possible.

and that’s the shame.

Keep it up .bro..don’t let the bastards get you down.

"He won the war after losing every battle"
--Zimmy

Yeah you're right. Some are victims and Some allowed themselves to victimize others merely because "It's a War" and they are the enemy...

I just vented a bit of my own personal angst and anger at taking part in a Phony War.

GeG,
A great many of we vets turn our anger inward, I'm happy that you can come to RAW and vent.
No fee necessary.
jim

Deryl,
If my memory is correct the museum of which you speak is in the old red brick catholic cathedral in Sai' gon. I used to pass it all the time and never stopped in to light a candle.
The VN learned torture from the French duexieme and they were experts. We white men sure do things up swell, we're an inspiration to backwards heathens.
I'll end out my days without going back.
jim
jim