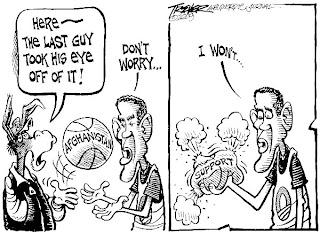 War is far too horrible a thing
to drag out unnecessarily
--John McCain,
foreward, the Best and the Brightest

Ask not what America can do for you,
but what together we can do for the freedom of man
--John F. Kennedy
________________
It seems the war policies of America are being steered by constructed media images and political posturings. The dual rudders of the ship of state are fear and false patriotism.

We accept Afghanistan as the necessary and good war, and do not question the assumptions that incited the imbroglio. Since these assumptions are assumed to be sacrosanct, and have not been reevaluated, then the continuance of the war by a Democratic president boils down to the basic driver of U.S. political life: The POTUS does not want to appear weak, and especially not weak on terrorism.

However, weakness (or non-aggression) can be a virtue, a fact which escapes those in U.S. political life. Leaders who like to talk tough, but never were required to be tough. Leaders who never dragged a wounded soldier to cover, or crawled across a shit-covered street simply to remain in dead space to avoid being shot.

Leaders who never had frost bite or heat exhaustion, never drank water from a scum-filled bomb crater, never were crippled by bleeding blisters. Never missed a meal or slept in their web gear with a rifle cradled in their arms. Not one suffered what McCain called the human degradations of the battlefield.

But they sure can trash talk some terrorism. If they had any moral courage, they would admit their weakness as factual reality and end the phony wars on terror (PWOT's ©).

The present reality of America is a shadow dream.

Like the Lovin' Spoonfuls said, it's not often easy or kind -- hey, we're up against friends. But this is the roller derby of life. Politics -- nasty business that.

The United States has not experienced the reality of war since 1865, and has not elected anyone to high office who had actual experience fighting as a private soldier since Lincoln, whose service in the Black Hawk War was fairly trivial. NO U.S. President has ever served as an infantry private in high-intensity combat.

Interestingly, the two infantrymen that I can think of who became high U.S. officials were Bob Dole, who was a 1LT, and Dan Inouye, who fought as a sergeant but was eventually commissioned. Phil Hart was in the infantry, too, but as a senior officer.

Until we do, our military policy will always be made by those who have no understanding of what they are condemning their own citizens to.

As I sit in my dorm at Ft. Leonard Wood surround by brave soldiers, marines, sailors, and airmen, I wonder what is our real mission in these "operations". Is it really as simple as "we need to kill the terrorists" without paying any attention to the why and how people become terrorists?

Just last night I attended the Air Force ball celebrating our branches 62nd year as its own branch of service. The guest speaker was a Brigadier General who spent a lot of time with Special Operations Forces, including the beginning of the Iraq war. While the speech was bland he did hit on something, war has gone from conventional to asymmetrical. While this isn't some new factoid it does bring up the point that the military's job is to adapt and overcome. Our job is to follow orders and get things done no matter what.

So of course when you ask a military commander if the war can be won the answer is going to be yes. We are too proud to say there is something we can't do (not to mention that at the very least you’d be replaced), no matter how vague the mission.

However, such is the beauty of a civilian being in charge of the military. Unfortunately most of our leaders haven't made the sacrifice of serving in the military themselves, let their children do it, or even take the time to understand what they are asking for. Not to say they are some rare breed, our 1st Sergeant tells us every Friday only 1% of the people in this nation serve in the military.

So these arm chair patriots beat the drums of war with no knowledge of it. They compensate for their weakness by speaking a big game, a game they know nothing about, while leaving the heavy lifting to someone else.

I bet these people would act a whole lot differently if they were to only go through the 9 weeks of basic training we all have to, much less serve in a combat zone. Oh why can’t Wesley Clark just run for president?

I predict Gen. Petraeus will be run for president in 2012. We're not supporters, but we think he'd win.

Clark is too yesterday. He is an opportunist and inconsistent, IMHO.

Brill. Friend FDChief has picked the link up on his site, MilPub.

Brill. Friend FDChief has picked the link up on his site, MilPub.

Irag International Airshow 1991, Baghdad, a signal is intercepted, located, and marked for recon.
Bunker in located somewhere-skirts of the city.
ID'd as command and control bunker.
Slated priority target.
Bomber.
Raid.
Penetrator.
Target locked.
Video running.
Bomb release.
Target terminated.
Woohoo's all around the monitor.
Nice day at work.
Go home to new born.
Watch news next day.
Bodies of kids.
Piled on the bodies of their mothers.
All from the bunker that was ID'd as part of Command and Control network.
Condolences rendered with blame jargon wrapped up in justification and rationalization and served as a menu item called collateral damages.
How palatable for the conscience to rephrase civilian kills as something innocuous, like a blister on the foot.

For some reason People in the United States like themselves a war every so often.
Till they get themselves into one, then realize that the bill for the desired meal is far more than what their checking account and credit card can pay for...or soul is willing to bear.

I wonder if we could start resolving our conflicts in this world with a vicious, cutthroat game of chess?

Sheer,
The PWOT is a mean game of chess and we're all pawns in the game.
Thank you Bob Dylan.
jim