RANGER AGAINST WAR: A Slow Song < 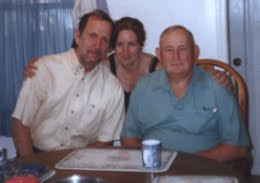 There are times when sadness overpowers me, and my center aches and rolls in anguish. Such was the evening of 11/06, when the past interested with the present.

My old friend called, a man that fought in three wars as a combat Infantryman, fought blistering sun, freezing temperatures seemingly beyond human endurance and faced and escaped death on hundreds of occasions. His business was dealing death from a rifle, and it was my pleasure to serve with him both overseas and stateside. He taught me more about soldiering than did any Army school, this man who was the very definition of a soldier.

During his tour in the Republic of Vietnam he earned the Distinguished Service Cross while with the 101st Airborne Division. While there, he was exposed to the defoliant Agent Orange, and his cancer was presumed to be acquired in the service to his country and the Army.

About six years ago he underwent several operations to treat complications from his abdominal wounds received in the Korean War, the result of shrapnel inflicted by North Korean tanks. Later, his prostate cancer was treated by the Department of Veterans Affairs hospital in Memphis, where he underwent a radioactive seeding procedure.

Three months ago he was operated on by a specialist outside of the DVA system who told him the cancer had spread to his bladder, and the the pellets had "burned" his intestines. His bladder is now history, and his condition less-than optimal.

The news is currently full of the killings at Ft. Hood, but it is a fact that my friend is every bit the victim as are any of those shooting victims. However, his story will never make it to any news report. He is being slowly killed by a system that discards soldiers after they cease to be useful.

Would any President, Vice President or congressman suffer similar indignities to their bodies without an ensuing hue and cry of "injustice!" My friend did everything and more that was ever asked of him, and this is his thanks. My sorrow is not for the poor treatment alone, but for a nation that allows such indignities to be inflicted upon them.

When Ranger hears his old friend struggling for breath over a telephone connection, it becomes evident that the parade has passed him by. It will be one of the hardest things I've done in my life to visit this man knowing that his passing will take a part of me with him.

Ranger is bitter and filled with tears that cannot flow, and if he were to walk away from these facts, then he would be less than the man who once walked with heroes. I do not believe in an afterlife, but men like this one must go somewhere better than where we are now.

posted by rangeragainstwar at 9:54 AM

i believe they do. i don't know how or where, but i believe that they do.

maybe it isn't true, but it soothes me to believe.

I cannot offer you solace except to grieve with you.

Stop all the clocks, cut off the telephone,
Prevent the dog from barking with a juicy bone,
Silence the pianos and with muffled drum
Bring out the coffin, let the mourners come.

Let aeroplanes circle moaning overhead
Scribbling on the sky the message He Is Dead,
Put crepe bows round the white necks of the public doves,
Let the traffic policemen wear black cotton gloves.

He was my North, my South, my East and West,
My working week and my Sunday rest,
My noon, my midnight, my talk, my song;
I thought that love would last for ever: I was wrong.

The stars are not wanted now: put out every one;
Pack up the moon and dismantle the sun;
Pour away the ocean and sweep up the wood.
For nothing now can ever come to any good.

i too grieve with you. unfortunately we have reached the age where the visible and certain thinning of our ranks becomes more and more something along the lines of a daily thing.

those true, and total soldiers who were the main reason you and i got out alive are a rare, and awe inpiring breed.

it always hurts to lose one more.

i'm sorry for your friend Ranger....

GD, Although Pappy was a E6 nwhen i met him I'd consider him a mentor in many ways. We don't see each other much but like the Jeff Airplane say - it's across the years that we meet up and reside.
I grieve for a nation that pays lip service to real men.
jim

MB,
Pappy has 3 cib's and his name USED to be listed on the wall of the old INFY museum at Benning. The new one has deleted this plaque. What a crock.
I once asked Pappy if i could write about his life and he answered that he wouldn't do it b/c he didn't want to brag. Well there's a lesson there somewhere for the generals wearing EIB's.
jim

FDCHIEF,
Thanks for your post at Graphic Firing Table.
I surely appreciate your friendship.
jim

Very sad. WWII was the last war that the U.S NEEDED to enter. Ever since then every war we've fought was a result of misleading propaganda by our corporate-run government. The total and utter waste of the millions of Korean, Vietnamese, Cuban, Panamanian, Iraqi, Afghani and U.S lives is a testament to our inability as a species to reign our baser animal instincts of prejudice and greed. Sorry for your impending loss.

I'm also sorry to read of this fine man's suffering and your grief.

Mike,
I too used to believe that the WW2 was necessary for the US to fight but I no longer believe that.
The world will/would balance itself out without our unnecessary participation.
When we entered WW1 &2 we assumed the collective guilt for colonialism and that dog is still biting us on the ass.
jim

Ranger I havent visted this blog for some time because I realized we were hurting each other and it was doing neither you, I, Lisa, or any of your readers any service.

PTSD is a bitch and as I believe I told you BC that I was a "pariah to the many and a good friend to the few". That's just the way I am and the way it ended was predictable, but for the better, maybe.

I think that to admit to being vunerable and hurt is the hardest thing for a Combat Veteran to admit. So we build the wall's of bitterness and rage around us. My second and present wife who was born in 1960 was five years old when I signed up, once said to me some time ago, "I never hear you complain like other people". I looked at her like I've done a thousand times before and said nothing. A few weeks ago I stumbled over the news that one of our small home town boys; one of our finest, was killed along with 14 other in an Blackhawk helicopter mid-air crash in Afghanistan, leaving a pregnant wife, an little girl, he had a week left in the 'stand'. I decided to attend his funeral to honor this man but the closer it got to the funeral the worse I felt, I realized I couldn't be there. As I write this the weight of it all is crushing me and I need to cry.

Like your friend "Pappy' one of the bravest and kindest human beings I ever knew was my mentor, hero, and fellow Fire Department 'truckie' ( ladder truck) Don 'Wink' Murray. One of Darby 2nd Rangers battalion; who task it was, as I'm sure know, was to scale the cliffs of Point Du Hoc during the Normany D-Day landings and take out the big guns before the men hit the beach, half the battalion was killed, he survived. He was transfered to the 106th in '44' and was at the tip of the spear when the German Army panzers smashed into his 106th. The men fought to the death until there was only 14 men left alive, out of ammo, and surrounded. They all took a vote wether to surrender; 'Wink' was the only man who voted no. he buried himself under a pile of frozen bodies listening helplessly while he heard the Germans machine gun the 13 defenceless men who surrended. He survived because he was a Ranger, one of the best. he died at 81, at home, of cancer in terrbile pain. This last words to me was simply, "Bobby I'm done". I wanted to say I loved him, but I was at a loss for words; but I knew that he knew I loved him deeply.

So take consolation that men like 'Pappy' and 'Wink' were loved and will remain remembered in our hearts till we toss off these mortal coils.

I feel a lot better as I write this I cancelled my plans for today. I'm going to pay 'Wink' a visit, remember, and salute, and a much needed cry.

Peace to you all,
Blackhawk187 aka MM