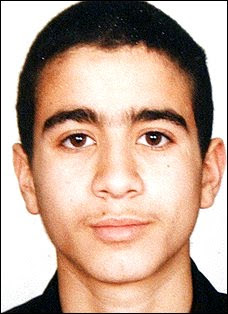 Omar Khadr, was 15 when he was captured
after a firefight in Afghanistan.
(Rick Eglinton - Toronto Star)
None of you will go to America,
none of you will be film stars.
And none of you will be working in supermarkets
as I heard some of you planning the other day.
Your lives are set out for you
--Never Let Me Go, Kazuo Ishiguro
______________
From the opening of the WaPo's story on Omar Khadr:

"Omar Khadr, the youngest detainee at Guantanamo Bay, Cuba, was 15 when he allegedly threw a grenade that killed a U.S. Special Forces medic in Afghanistan. Now, more than seven years later, Khadr is drawing the Obama administration into a fierce debate over the propriety of putting a child soldier on trial" (Former Boy Soldier, Youngest Guantanamo Detainee, Heads Toward Military Tribunal).

That's how war on the battlefield goes: If SF can kill them, they can kill SF

On July 27, 2002, U.S. Special Forces working with Afghan troops surrounded a compound in a village in eastern Afghanistan. When those inside refused to surrender -- and opened fire, killing two Afghan soldiers -- Apache attack helicopters, A-10 Warthog fighter jets and, finally, two F-18 jets unleashed their arsenals, reducing the hideout to rubble.

When the dust settled, American forces approached the ruined compound, only to be blasted by a grenade thrown by someone inside. Delta Force 1st Sgt. Christopher Speer, a father of two, would die more than a week later at a military hospital in Germany. Another Special Forces soldier, Sgt. Layne Morris, was blinded in one eye by another grenade.

Inside the compound was one survivor, Khadr, who had been shot twice in the chest.

The U.S. used hundreds of millions of dollars of death-dealing hardware, and Khadr responded with a simple hand grenade. Where is the war crime here?

There is no strict international prohibition against prosecuting child soldiers, but there is a general consensus on the issue. The U.N.-backed Special Court for Sierra Leone, for example -- which was set up to try people accused of grave human rights violations -- allowed the prosecution of people 15 and older, but no minors were put on trial.

The issue is not age, but criminality. Khadr was not in Sierra Leone conducting criminal violence against civilians, but rather conducting a desperate defense against an assault.

The entire Phony War on Terror (PWOT ©) is based upon emotional response rather than cold logical military or legal precedent. There is no legal precedent for trying Prisoners of War for crimes, unless they were war crimes or crimes against humanity.

Khadr fits nether description as he was fighting defensively against overwhelming military power, and captured on the field of battle. He is a classic POW. Plain and simple.

The problem with the PWOT addicts is that they make a miasma of all the players.

Contrast Khadr with someone like Khalid Sheikh Mohammed, who is a strict legal issue since he engaged in purely criminal activity. He conspired, planned and engaged in murder, probably not isolated to the events of 9-11-01. He was apprehended and arrested in a civilian environment and was not a rifle-toting member of the military arm of al-Qaeda.

KSM is the personification of the far threat to the U.S. He is not a soldier, but an operative of selective skills that can project serious damage. Someone like Khadar posseses no such skill sets.

Khadr's defense says Khadr "was tortured in military custody and that all statements, even if given later and seemingly voluntarily to FBI agents, are contaminated by the alleged earlier abuse, which, they said, included threats of rape, stress positions and the use of snarling dogs." This trial, whether by Federal Court or Military tribunal, is addressing the wrong issue.

The question is not "Did Khadr kill a U.S. soldier?", but, "Was this a battlefield exchange?" If the latter, it is not murder.

posted by rangeragainstwar at 6:16 PM

Thanks for bringing this issue to light Jim. It's a very contentious issue here in Canada. Omars parents were al-Qaeda sympathizers and his father and uncle fought for al-Qaeda in Afghanistan where his father was killed. His dad took him to Afghanistan and at the age of 13 left him in this village to act as an interpeter. His family here in Canada have continued in their vocal support of al-Qaeda which does not help Omars cause. Some Canadians see him as a terrorist while most see him as a child soldier. The Harper government has refused to repatriate him but then they have a poor record of standing up for Canadians caught in the PWOT or those killed by the Israelis. The Federal Court of Canada ordered the government to request Omars return to Canada in April 09 but the Supreme Court overturned this in Jan acting on a government appeal.

This case has many holes in it. His defense team has been stonewalled at every turn. An American soldiers at the scene has now come out and testified that Omar was not the only one alive at the scene. And he's been held all this time without a trial. Canadian intelligence officials interviewed him in gitmo and were aware of his torture and did nothing about it so that's been a complicit war crimes issue here.

TW,
Thanks for the background.
To my knowledge and research Khadr was not a trained AQ type when we fired him up.
The lack of logic and the emotional responses in the PWOT defy reason.

My favorite concern about child soldiers is that we condemn the concept but still have JROTC in our high schools.HMM..
jim

Of course to the neo-con/PNAC mind a heavily armed combat force invading a country and attacking villagers is exactly the same as a bunch of innocent kids enjoying the movie at the drive-in.

TW,
Just in case i wasn't clear,imo,Khadr is a classic POW and it's a farce to talk of trying him for battlefield conduct that was in accord with the rules of land warfare.
I regret the loss of SF lives, but they were doing their best to kill people that day.Are they criminals?
If it was criminal for Khadr then it was a criminal act for them.
jim

I agree with you Ranger. A bit more info on Khadr, his parents immigrated to Canada from Egypt in the 70's I think it was. He was shot in the back and while recupperating was put in extreme stress positions for long painful periods of time. He's blind in one eye from the incident and is definitely one psychologically screwed up young man.