RANGER AGAINST WAR: For Esme < 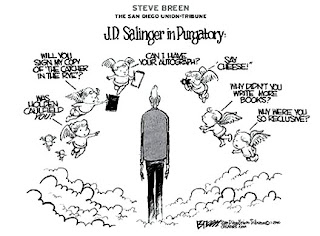 I’m just sick of ego, ego, ego.
My own and everybody else's
--Franny and Zooey

I hope to hell that when I do die somebody
has the sense to just dump me in the river or something.
Anything except sticking me in a goddamn cemetery
--J.D. Salinger
_________________
Friend and associate DM, Army vet and poet, recently contacted us about some distress he is facing; as a result he will no longer be publishing his poetry. This is our loss, and it got me thinking about the 1950 J.D. Salinger story, For Esmé — with Love and Squalor.

Esme is the story of a WWII soldier, Sergeant X, who suffers a nervous breakdown (presumably Salinger himself), and a 13-year-old English girl, Esme, whom he meets in a Devon tea room before the D-Day invasion. Esme is precocious, and asks X bluntly,

"Are you very deeply in love with your wife? Or am I being too personal?"

X does not answer that question alone among the others she had posed. Later, he quotes Dostoevsky who says hell is the "suffering of being unable to love." This presages a later indictment from a psychology major that he was probably "unstable all of his life." Certainly, he displays a measure of estrangement.

Salinger describes soldier X as bringing a "gas mask container full of books" from the Other Side (the U.S.), and synchronizing his wristwatch with one in the latrine before heading out for his chance meeting with Esme, who hopes for him that he returns from battle "intact". Later, we are told he did not make it through "with all his faculties intact." It is ambiguous as to whether he entered fully intact, or not.

However, post invasion, X's break from society is complete. The now dirty-haired, face-twitching and hand-palsied veteran receives Esma's dead father's wristwatch as a "Lucky talisman," but the crystal is broken, symbolically calling into question his future and maybe indicating the deterioration of his ability to keep time (past, present and future) in perspective. With the lens cover removed, it is too easy to reach into the mechanism and smash time altogether.

The soldier's trauma is summarized here, and is as valid in 2010 as it was 60 years ago:


"Yeah. She's interested as hell in all that stuff. She's majoring in psychology." Clay stretched himself out on the bed, shoes included. "You know what she said? She says nobody gets a nervous breakdown just from the war and all. She says you probably were unstable like, your whole goddam life."

There are still professionals who believe PTSD is the refuge of parasites, or that it is an illusion or an affliction that only bites weak-minded people. These thoughts have been expressed to me, and I imagine it is a comfort to the person expressing them. It absolves them from responsibility for the soldier's lack of emotional range, and the thought that there might be some event so traumatic that it might reduce their own range of expression. By denying PTSD, society rids itself of culpability, placing the responsibility for defect onto the soldier's shoulders.

This is unfair, unfeeling and wrong since there is already too much on their shoulders which they never expected to experience. Unlike the broken watch glass, a soldier's psyche is much harder to see and repair. Replacement is not an option.

It is unclear whether soldier X arrived at battle with psychiatric troubles or not. He may have been troubled or somewhat dissociated, but his battle engagement severed his ability to wear the social mantle. Like the broken crystal, his shield is now cracked.

The post war period was rife with literature of trauma, but little was made of the fact. Salinger was always treated as an eccentric hermit, sometimes dirty and disheveled. This was construed as being the trappings of a bohemian artist, when it may have been the result of combat trauma.

Salinger's most famous character, Holden Caulfield -- anthematic for generations of alienated youth -- may stand as surrogate for the emotionally arrested young soldier who re-enters a society in which he feels himself to be an outsider. Soldier X changed following his conversation with a precocious pre-teen, whose directness touches him. She may sense his fragility by telling him she will initiate their written correspondence, so that he will not feel "compromised in any way."

Salinger's millieu was always that of the young adult, perhaps the stage in which he was frozen, the rebel who nonetheless feels his own insecurity, and perhaps for the last times feels a part of a recalcitrant society of one. In this rejection, the rebel-teen is wholly his own, even if rejected from membership in something larger. For the rest of his life, Salinger embraced the power of "No".

Salinger is now beyond the cares of this world, but we get it. We in the U.S. are now well-acquainted with squalor, and many of us are temporarily insane. At least, as with soldier X, we hope it's temporary.

posted by rangeragainstwar at 7:48 PM

i would be far more worried about the sociopathic sons of bitches who aren't troubled by the things they are asked to do in wartime.

i met a few of them. guys who got off on the whole thing in a weird psuedosexual way. guys who were sick enough to celebrate the carnage. guys who had enough pure ass hate stored up that they could call upon their reserves and use them at any moment.

i didn't like them much, it bothered me when i would pick them to go with me on ops.

fuck though, a steady hand is a steady fucking hand.

MB,
There's some fine points that we should cover.
-some soldiers put on a face of violence and carnage that they can shed when they leave. These guys are OK.
-Then there's the truly dangerous guys that have crossed over, for whatever reason, and will never recover their humanity.These are the guys that love to call themselves warriors-with a big w, but i will not so glorify them. They are forever little w's in my estimation.
You still seem a bit conflicted on this issue,but it's ok,i'll issue a special waiver for a man of your distinction.No sarcasm intended,as i have nothing but respect for your background.
jim

Trying to remember who did a whole big-ass study on this I think its in Dave Grossman's "On Killing".

As I recall he comes to the conclusion that many, many people are "sheep" - that they are essentially violent only in absolutely desperate circumstances, and that both committing acts of violence are extremely painful for them, and the mental aftereffects are deep and long-lasting.

He also concludes that a relatively small percentage of people are "wolves" - completely indifferent to taking life, and capable of doing so casually and without emotional damage. OF course, you could argue that these people are already FUBAR.

His third group are what he calls "sheepdogs" - capable of violence under relatively strict rules and emerging damaged but functional.

His opinion, as I recall, was that the sheep can be soldiers in most circumstances but pay a heavy price. And that they're not worth much as ground-combat troopers.

The wolves, who you'd think would be the ultimate warriors, were problems because they simply didn't have the ability to distinguish between necessary and unnecessary killing, and their casual indifference to the deaths of their own squaddies would lead to problems over the long run. He saw them as useful soldiers only if tightly controlled and dangerous even then, since they would fight the controls to the point of fragging their officers and sergeants without hesitation.

Needless to say, his "sheepdogs" were the best infantrymen. But as such they got overused and burned up, too. Hard out there to be a sheepdog.

Interestingly, he also believed that we were doing an excellent job of turning more of our kids from "sheep" to "sheepdogs" and from "sheepdogs" to "wolves" by constant exposure to violence and violent imagery.

Not sure I buy the whoe nutroll, but some interesting ideas

he told his daughter: "You never really get the smell of burning flesh out of your nose entirely, no matter how long you live."