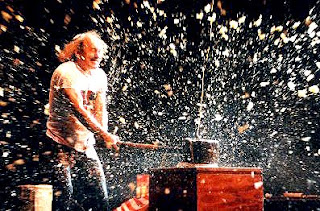 Gallagher, taking his Sledge-O-Matic
to a watermelon

Well I've been out walking
I don't do that much talking these days
These days I seem to think a lot
About the things that I forgot to do
--These Days, Jackson Browne
_______________
Ranger has been thinking about the state of U.S. war fighting abilities and the way that we fight these days. The recent battle at Marjah (The $35 Billion Mud Hut) is instructive.

The news reported U.S. military estimates of the number of insurgents ranged from 600-to-1,000, a pretty large margin or error. For convenience we'll assume it's a planning estimate, but when doing so please remember that U.S. forces have the full monty of theatre war fighting assets, and the insurgents/opium growers have generally what is called "light infantry potentials". That the estimates vary so wildly alone show the shaky nature of the operation.

Here is a U.S. Army doctrinal factoid from the past when the U.S. fought real wars: In the deliberate attack, the usual minimum manpower ratio for successfully constructing a planned assault on a fortified position is 4 : 1. The principle of Economy of Force in the Principles of War suggests this.

This classic formula was for the conventional battlefield when attacking forces of comparable capabilities. The Taliban is a rag-tag force, by comparison. What is obvious is that U.S. forces are killing flies with eight-pound sledge hammers.

Even in the worst-case scenario, 4,000 Marines could have done the job. So why are so many friendlies conducting this operation?

posted by rangeragainstwar at 9:28 PM

I've wondered this myself many times. The only thing I've come up with is that Marjah or any other town is essentially one huge ambush. The enemy of 1,000 isn't in a fixed location.

Once the friendlies pull into town they're surrounded.

this was exactly the same problem that faced alexander.

it's been very strange to watch.

the same thing happened to the brits too. they moved in force into kabul. the afghans melted away, then the little probes started to happen, a sentry here, a patrol there. in the space of a few months, the brits were forted up, and static.

a force of thousands was whittled down piecemeal into one, sole survivor.

i sincerely hope that i'm wrong, but my feeling, my old jungle nerves are jangling harshly.

Alexander and the Brits did not have combat power that exceeded the hostile tribes they faced...I know M.E.T.T. plays a huge part but a huge part of Terrain Advantage is nullified by our technology...Now if they can get the hearts and minds part right between the rival clans/tribes then we'll be out of there in a hundred years or so. ha ha ha! The more the merrier I say...

The margin of error may be due to varying definitions.

Did they really claim the figure for "insurgents", not TB?

The Marjah green area has a border about 30 miles long. I think this takes many troops to seal off.
The insurgents use local resources for sustainment while the attackers have their base quite far to the north and need support troops for sustainment.
Medical, recce, fire support abilities are all superior and take further support.

In the end, there's probably less than a 2:1 ratio in infantry.

Sven,
I'm discussing cbt troops since the ash and trash are usually not included in the engaged forces equation.
The 4;1 is not written into stone.Look at the Vistula front in which Heinrici fought 20 plus to 1 and did a credible job ,considering the bigger picture.
MB,
I don't ever imagine that a US BN will ever be over run, but little isolated garrisons are easy pickuns in the AFGH scenario.
It's exactly what both of us were trained and expected to do and that's what they'll do. All they have to do is read Soldier of Fiction magazine.
jim

Spiider,
I'm so happy to hear from you.
I was worried about you. I'm glad to see that your foul mouth is still kickin'.:)
As for this art.
It is so obvious what i'm saying that no one thinks to mention this fact.
jim

Sven,
The arts that i read said-insurgents rather than TB.
I'd like to add that this is not Stalingrad or Corregidor.
jim

Spiiderweb, 1,000 light infantry guerrlla fighters with no air or artillery support ambushing and surrounding 12,000 troops from the worlds most expensive and heavily armed military units seems a bit far fetched to me. And yet at the same time I think you're pretty much right. So that leaves the command structure as the most likely problem.

Sven
Just thinking about the big picture here.
Would you say that 15:1 odds are a bit in conflict with the concept of economy of force?
I value your military knowledge.Anyone that reads Wehrmacht 1933 manuals knows a bit more than this Ranger.
jim

one of the effective techniques we developed in Iraq was to put the enemy on the payroll.

GD: While that's not a bad idea - paying/bribing/threatening/fooling one tribe to fight another has been pretty much SOP in central Asia - one issue that we're finding is that while we have enough money and few local enmities, our local clients don't have that luxury. So when we grab a hat - as we now have in Iraq - a lot of the tribe-buying comes undone.

But the cautionary tale here is that the Sovs left behind a fairly stable proxy in Kabul that lasted for three years. But at the end of that time a combination of Russian political decisions and internal factions imploded the Najibullah regime and brought in the Taliban.

So here's the problem; we won't really know for three...or six...or a dozen years whether we're doing this right. And we can do it "right" for half that time and THEN fuck it up.

Given the political history of central Asia, I'm not hopeful. But I'm not running this show; hopefully the people in the Echelons Above Reality are smarter than me.

i like that term "echelons above reality". heard it before. very descriptive. good use.

not to quibble too much mr. rangerhazen, but, in both massed numbers and in technology the macedonian phalanx, with the complementary heavy cavalry (persian cataphracts, scythed chariots, and motherfucking elephants), missle troops (rhodian slingers, sythian archers), the army that alexander took into afghanistan was vastly superior to the tribesmen they faced.

seeing a macedonian phalanx, with its 900 superbly trained heavy infantrymen, wielding 18', razor sharp sarissas, interleaved with the sword slinging shield bearers (the guys who carried the shields in the front rank were alexander's elite infantry, their shields were faced with silver) was the age equivalent of "shock and awe."

the afghans, however, absolutely refused to meet him mass force on mass force. they knew they would lose, so they never played that game.

alexander, and later generals from cyrus the great through several russians, tried every tactic imaginable (and in the case of the russians a few so horrific as to be unimaginable) and the afghans thwarted them at every step of the goat path.

most attempted invasions/occupations of the afghans end with a thoroughly exhasperated enemy resorting to genocides and/or hostage taking and subsequent murders.

i understand the tribal culture that the afghans come from, it's my own in many ways.

the only thing that the white mountain apache hate more than the chiricauhua apache is everybody else in the fucking world. the same can be said of the afghans.

also, among those tribes, there is a nearly sacred cult of revenge.

every case of "collateral damage" that is done, makes another four generations of tribesmen dedicating their lives, and the lives of their children to fighting us.

i have said here, and elsewhere, that we will not fail in afghanistan because of anything we do or do not do. we will fail ultimately because we are who we are, and they are who they are.

It's cool Minstrel Boy...My point was that Alexander's main weapons were no different than that of the tribes he fought. Alexander himself nearly died in the Stan...

GD,
I think that ech above reality is a play on EAC- echelons above corps.
Just a little mil factoid.
jim

From the moment I heard 15,000 U.S. and NATO troops against approx 1,000 insurgents, I thought, STUPID. Like mentioned, that type of ratio will do nothing more than force the enemy to withdraw, relocate, and wait til the odds are in their favor. I disagree with the amount of forces integrated into the battle for marjah.

They should have made it somewhat equivelant of a ratio to entice the enemy to counter-attack. That way we could within 24 hours have utilized air support or quick reaction forces to seal off and cover exit routes and cordon off the area surrounding the objective. 15,000 to 1,000 is overkill and a horrible display of economy of forces.

The media isn't helping either. Our military and its members need to practice better OpSec to allow mission accomplishment and effectiveness. Media is already talking about a big offensive in Kandahar next. If I were the opposition, I would just tune into FOXnews and/or some sort of AP website for intel on our next moves.

Anybody agree with the media issue I just mentioned?

Calling a war an "operation" is a misprision, but calling the "operation" "Operation Iraqi Freedom"?

That's just stupid, and lazy. IT assumes that the prospective enemy has no serious signint or other intel penetration of our strategic communications and that surprise is unnecessary for success.

For our current imperial frolics in the hustings perhaps. But what gigs me is that if we get into this way of thinking we'll run into an enemy that DOES have the capability to intercept and decode our commo, and then where will we be?

Dead on the DZ's of "Operation Ukrainian Spring" or some such bullshit. That's where.

Not sure why you are bringing up Operation Iraqi Freedom. Was talking about the assault in Marjah and the effects of a troop-to-insurgent ratio being overkill causing them to withdraw/relocate.

Although your views are of your own opinion, I'm not sure if I see the relevance in your post as a reply to my opinion/comments/questions in regards to my 'large margin or error' blog posting you replied to.

Anyone else out there that is willing to comment on my post, or express their tactical preference for the mission and the effects the media has on the operations conducted in Afghanistan?