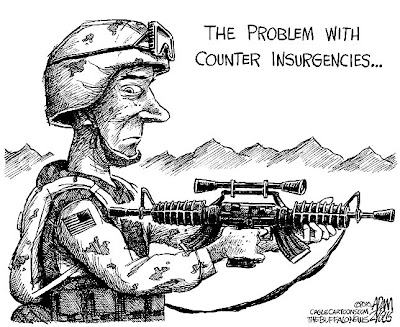 You either got faith or you got unbelief

and there ain't no neutral ground
--Precious Angel, Bob Dylan

We sing about beauty and we sing about truth
At ten thousand dollars a show
--On the Cover of the Rolling Stone,
Dr. Hook

Those who have crossed
With direct eyes, to death's other Kingdom
Remember us—if at all—not as lost
Violent souls, but only
As the hollow men
The stuffed men
--The Hollow Men, T.S. Eliot

Friend Publius recently commented that recently demobbed General Stanley McChrystal, he of Rolling Stone infamy, may have unconsciously wished to be relieved of command.

So: What if McChrystal DID unconsciously engineer his dismissal due to the stress and internal confusion caused by executing an immoral, illegal and pointless war? What if his conscience is in revolt?

What if General Petraeus passed out while testifying in congressional hearings fainted because his conscious mind is rebelling against his subconscious knowledge that he is a hollow man laden with meaningless medals that signify naught. What if his mind just shut down from the psychic overload of the reality versus the lies?

What if the famous West Point Honor Code crept into his brain and overwhelmed his imposed and constructed beliefs? There is a place where reality (truth) and lies intersect, and this place is psychosis.

What if the U.S. currently resides in a state of national psychosis? What are the current wars if not a manifestation of collective psychosis -- wars which defy rational thought and will never achieve anything of merit?

What if logic and clarity of thought are no longer a leadership requisite? What if our leaders and their re-election reflect nothing so much as our ignorance and mass hysteria? What if we have approached an episode of national schizophrenia, sometimes defined as stimulus overload?

When is too much? We are on a treadmill of input, trying to filter out the extraneous or downright lies, but the feed never stops. News programs assault us with pugnacious opinionators, while dissonant feeds scroll across the bottom of the page. It is like some horrific dystopian world in which words are our SOMA.

When the psyche is overloaded, the organism enters a state of struggle for definition. It rarely heals without a period of rest and/or intervention. It does not look like the media onslaught will abate anytime soon.

As a nation, we are a bunch of re-actors. We vote to the swing of the pendulum, in anger and without much deliberation. Logic and orderliness of thought does not seem to be the order of the day. We prefer the antipodes, but cannot decide which reflects our best national interests.

The U.S. is a nation in opposition to itself and its national values, or what we thought were our core values. The decisions of our Supreme Court reflect this ambivalence. Engineers of state torture -- Bybee, Yoo and Addington -- were recently cleared of charges because they believed in the righteousness of their decisions. And so passioneering takes the torch from disinterested rationale.

What if we are so morally bankrupt that we have actually adopted a Warrior Code, and war has become our national identity?

We are acting from Sartre's mauvaise foi (bad faith). For the world's freest nation, saying "You made us do this" is poor form. "You won't you let me (be a democratic nation; honor our civil rights, etc. . . .)" -- is the cry of spoiled child. We do or we don't, we are or we aren't.

Perhaps the Generals know this, and their innards are staging an externally-witnessed revolt.

Last day to exercise your franchise!!!
You must vote in the 5 categories marked with an asterisk (+ #18, in which RAW is also competing).

posted by rangeragainstwar at 11:38 AM

Jim, excellent post! There will be more and more happenings of this type - the collective human consciousness is stirring..One can only hope for a just repayment for the cruelty and madness visited on so many souls past & present.

The answer I think is that we arrive where we're at.

Carl,
I may be mistaking and/or overstating in this post.
I'm assuming that McC/Pet are actually thinking/feeling beings.
What if they are not?
As an example-Mc C's favorite movie has been reported to be none other than Talladega Nights. That fact alone points to him being brain dead, if the report was true.If this is the sophistication level of our o10's then we are surely sucking the big one.
As always, thanks for the compliment on the post.
The essay was inspired by threads on milpub.
jim

An echo chamber of yes men cannot entirely drown out the voice of a man's conscience.

I believe it is true.

Carl,
Lisa did a fact check AND McC did say that T.Nights was his fav movie.
God help us.
Todays Newsweek quoted Gibbs as saying that Obama will do everything necessary to see that Mc C retires as a 4 star.
Don't throw me in that briar patch.
Obama sure is a stern fuhrer.
jim

J/L - It is obvious humanity needs to regain its humanness before anything can be accomplished; on this plane and others. I think we as a species, have regressed. Constant war & violence have eroded our true spirit, along with the myriad of energy sapping and center unbalancing programs applied to all. Technology and materialism aside, what have the majority of humans accomplished in the last 200 years to advance our core of being..."beings"?

I agree re. our regression. Regarding our "true spirit", I do wonder. Hominids are a particularly nasty crew, I think. As with the other primates, we have some glitches along the lines of fighterly instincts. With our opposable thumbs we've learned to wield weapons ...

Of course, there are those who would argue this adaptive, and it has allowed for great conquests, etc. However, it doesn't so much to foster the "Lion and the Lamb" thing.

Our technology is outstripping our humanity, as MLK noted.