RANGER AGAINST WAR: The Boering Wars < 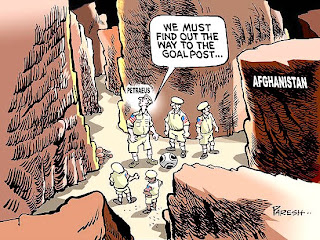 [Ranger feels that the "Long Wars" in Iraq and Afghanistan deserve a more inventive name, befitting future discussions; something like Wars of the Roses, which is evocative.

A new name for the Phony Wars on Terror (PWOT ©) could be The Boering Wars, a sort-of homonym with a hat tip to the colonial + wanna-be commando nature of the project. Other titles are welcome.]

"This edition of Army Echoes coincides with our Army's Birthday. In mid-June, we turn 235 years old. And we remain the best at what we do -- despite the stress and strain of fighting the longest war in the history of the All-volunteer Force [AVF]."

The old Army died and was buried in 1972. It had learned not to get into long and endless wars. Maybe because that was because the old Army had Chiefs of Staff that wore valor awards topped by Combat Infantry Badges.

The new Army is 38 years old. The New Army is the AVF that is totally out of sync with the history of the old, once-proud, Army.

General Casey continues, "[The Army in 2001] was too small to do what the nation had asked us to do." He describes it as an Army "designed to fight large, armored battles on the plains of Europe or in the deserts of Saudi Arabia." The Army was NOT "too small".

If it was too small to fight a miniscule Terrorism threat, then how can we believe it could stop the Russians or Chinese? The Army did what it was asked -- the problem is that it attempted to do what we didn't ask.

We asked it to invade countries and protect us from terrorism. We did not ask the Army to be a nation-building fanatic. The Army does combat well, but Counterinsurgency, not so much.

He says, "We are engaged in a long-term ideological conflict, and -- while we know that we will prevail militarily -- we recognize that any successful strategy requires long-term commitment, patience and national will."

Again, NO. The Army is not engaged in an ideological conflict. That the adversary (defined as Terrorism) is clearly ideological doesn't make our reaction ideological. Ideological wars are difficult to define and to win.

The Army C/S classifies the U.S. operations as ideological, but fails to define what a successful strategy would entail. Probably, a solid National Will, which has instead nixed these phony wars since 2006. The military is fighting a war that is separate and distinct from the national will, a war supported completely solely by the political and military elite.

It is amazing that old soldiers fail to see this fact.

posted by rangeragainstwar at 1:04 PM

No, the Old Army died when they went to black boots and those green Class A uniforms that made soldiers look like the German Wehrmacht.

I find it odd that GEN Casey is such a company man. His father was a GO too, in fact was in charge of the 1st Cav in VN and died in a helicopter crash there.

Barca,
We agree that this is not the old Army.
jim

I would imagine that life in the infantry is exactly the same as it's always been. I can't speak for the rest of it, but there are certain qualities that a military has that are not easy to make disappear.

The All Volunteer Force is nothing more then a Military Industrial Version of Wall Mart and it's completely divorced from reality. It makes me sick. I have not met anyone who can define victory for me and other that the usual platitudes on the 4th along with a few poignant stories about the untimely deaths of a few soldiers No one cares except ironically... those wing nuts who want us to stay in Iraq and Afghanistan as long as we've been in Korea.
Not many listen to reason these days.

WH,
Strange that you mention Korea b/c Mansoor said that we will be in Afgh a long time-similar to Korea.
What craziness!!It's as if being in Korea is a reasonable and good thing.We should get out of K as surely as we should get out of Afg.
There are some favorable arguments for being in Korea, but they are all based in Cold War logic, which has been OBE.The arguments for staying in Afg are equally weak minded.
I did not, and could not watch the 4th celebrations on the tube.
If i were president i would eliminate the service academies and commission only thru ROTC, OCS , or direct commissions. The service academies perpetuate this professional stance thing.
As always, nice hearing from you and the boo.
jim

Grant,
The MARCH OF THE 10,000 is hard to distinguish from the fight and withdrawal at the Chosin reservoir.
Only the weapons changed, but the song remained the same.
jim

jim: I'd argue that the real "old Army" - the one with the links to the pre-WW2 "small Army" - died in Vietnam, so your 1972 date is spot-on. We lost a ton of guys; dead, wounded, retired...who had seen WW2, Korea and Vietnam. But, I think, what was more important is that we decided that we had to throw out the experience that those guys had because we "lost" in SE Asia. So we reinvented the wheel, dumped (or stopped listening) to all the guys with expeditionary experience. I remember Dave Hackworth used to go nuts at the number of things he would tell the young officers serving in central Asia that he'd learned the hard way about fighting G's that they had never heard of. He used to call it "CRS Syndrome" for "Can't Remember Shit".

I think that our current Army is able to keep doing what it's doing because the populace just doesn't give a shit. The deaths and wounding are confined to a tiny, self-selected group, and the Right-wing noise machine manages to obscure the connection between having American soldiers on the ground killing central Asian Muslims and other Muslims wanting to kill Americans.

In other words: SSDD and WASF...

Chief,
I'm speaking macro when i say 72. That's when i remember VOLAR biting us on the ass, and it's gone downhill since then.
I served with WW2 men until 1975.
The country , like the Army, reminds me of a man that just got hit in the chest and is already dead but his body still hasn't got the word.
Hackworth is not one of my favorites.Like the rest he talks how rather than why.
I have been leaving cmts at milpub, but they never take. I get VERY FRUSTRATED.
jim

jim: re: the comments thing. I usually have to "re-post" comments at LEAST twice. I type the comment into the window and post it. If I'm not logged in it then sends me to the login window where I have to login. Then it sends me back to the comment box, where the comment is sitting there. I hit "post comment" again - and then it turns up with my little snapshot icon in the corner. Than I his post AGAIN...and it goes.

It is frustrating, but that's Blogger. For example - I'm writing this comment and looking at the red "X" of Death where the word verfication should be. Goddam Blogger.

And I had my problems with Hackworth, too, mostly his "I'm so fucking much harder and smarter than you" attitude. He always came across like a mouthy asshole. But some of his observations were spot on, and I always thought that his "CRS" comments were among them.

All I can say is Hackworth wore a Ranger Tab he never earned until he got busted by some Viet-Era Rangers and then there's his prediction about causalities in Gulf War I... Where he predicted Thousands to Tens of Thousands of Allied Dead and Wounded.