RANGER AGAINST WAR: The Fourth Musketeer < 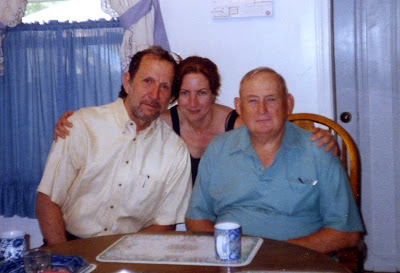 If your life is a leaf
that the seasons tear off and condemn
they will bind you with love
that is graceful and green as a stem
--Sisters of Mercy, Leonard Cohen

I've seen fire and I've seen rain
I've seen sunny days that I thought would never end
I've seen lonely times when I could not find a friend
But I always thought that I'd see you again
--Fire and Rain, James Taylor

Let's not unman each other - part at once;
All farewells should be sudden when forever,
Else they make an eternity of moments
And clog the last sands of life with tears
--Sarandapalus (V, i), Lord Byron
__________________
My friend, William Hurt Thornton, died May 16, 2010. He was a good SFC and a good Tennessean, and much more.

I always called him Pappy, even while a young Lieutenant playing Army, and that's what it was for me much of the time. But Thornton was always the definition of soldier, and never played at anything.

Pappy had three awards of the Combat infantry Badge, a Distinguished Service Cross, four Silver Stars, Eight Purple Hearts, two Soldier's Medals and a whole showcase full of other medals. His DSC was won in his 3rd war, Vietnam.

He was especially proud of his Distinguished Rifleman Badge, and his President's 100 Tab was one of the few he wore on his uniform. Pappy lived by the rifle in all senses of the word. It is also safe to say Pappy died by the rifle, even if indirectly.

In later years his old wounds caused a myriad of problems, but it was cancer that made the kill which had eluded many enemy soldiers.

His cancer was presumptively service-connected, caused by Agent Orange exposure in the Republic of Vietnam where he served with the 101st Airborne Division. (In the Korean War, SFC Thornton served with Task Force Smith, the first U.S. Regimental Combat Team to counter the North Korean invasion of South Korea.) Four enemy Armies couldn't kill him, but Agent Orange combined with a botched VA procedure did the deed.

During my last conversation with Pappy he was matter-of-fact and knew where he was headed. He had faith and did not fear.

The last thing I said to him before we broke the connection was, "Pappy, you know that I love you?", and he said, "Well, sir, gotta go now! See you later." Not that Ranger is very touchy-feely, but we were in different generations.

I certainly hope he received my transmission.

posted by rangeragainstwar at 8:00 AM

We need to remember Pappy and those like him. I lost two friends recently to the big C - one was a ww2 destroyer sailor the other a Marine who served at the frozen Chosen in Korea. They both deserved to live to a hundred and die peacefully in their own bed instead of in a cancer ward.

mike,
One of the things that i fear is true is the fact that men like these are the ones that made it thru the various battles.
Imagine how many good men like them were killed .It's a hard thought to even consider.
They do deserve a long life, but the tide of time is relentless.
jim

sorry about the passing of your friend. don't hold on to nuthin' too long...

A fine memorial; I think Sgt. Thornton would be pleased and proud.

It's a hard old thing when those we love and respect leave us and we find ourselves more and more solitary. I offer my respect to you for staying close to him at the hardest time.

A lovely tribute. Sorry for your loss, thank you for sharing a bit of 'Pappy' with us.

May he RIP. Thank you Jim for his story, he and all the others should be remembered and never forgotten. Also not to be forgotten nor forgiven is the way these fine men & women were & are simply discarded by the very same people that asked so much of them. I hope to see that wrecking ball swinging back the other way, eventually..

To all,
One of my favorite memories of Pappy was when Lisa asked him what i was like as a young LT, and he simply said-he was ok.
In TF Smith his Platoon Ldr disappeared from the face of the earth while trying to kill a t34 tank.
Compared to this i guess ok is good enuf.
I never heard Pappy raise his voice.
The only time i saw him drink was the day before he retired. I reckon he earned it.
One of my other fav memories is when he said-Hathcock ain't shit, i killed more men than him. Now that's quite a statement, but i knew it was true.
It's hard for me to believe that we are growing such soldiers any more, but i'm hopeful.
jim

To all,
Pappy is buried in Boulder City, Nev.
jim

I guess the Army is different than the Navy in that I, as part of the general sea-going community, only one time in 21 years, came across the same person for a second time. I never made those long term friendships that folks in a small community can make.

The Ol' Chief salutes for being a long time friend to these troopers and for a fine post.

Chief,
I served in 3 Army Marksmanship Units and the shooters obviously stayed in these units on a long term basis.
Especially the National level shooters.
The same can be said about the Airborne types that gravitated to Benning.
Thanks for writing.
jim

(give him praise and honor, he is soldier)

yeah, the roll call get thinner and thinner down here every day.