RANGER AGAINST WAR: Being I.D. Compliant < 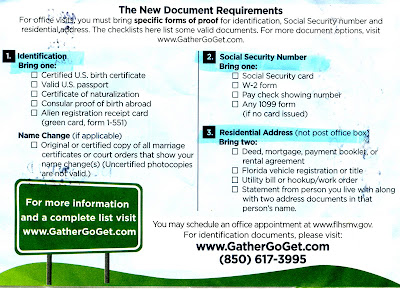 --Do you want to see my ID?
--No need, sir.
--But I could be anybody.
--No you couldn't sir. This is Information Retrieval.
--Brazil (1985)
__________________
Ranger recently violated Rogers Rules for Rangers by losing his wallet (his wallet wasn't the thing he was hoping to leave behind.) This led him through the Brave New World portal known as I.D. Compliance.

To be I.D. Compliant is to be in compliance with Homeland Security regulations, which in Florida is heralded by the clunky slogan, "GatherGoGet" -- in other words, FETCH! Florida prides itself on being one of the first states to make hurdle-jumping for a license the order of the day.

Once one presents documents from all three sections, one is rewarded with a gold star, which is imprinted on the license. All supporting documents are maintained in a central data bank.

At first it was suggestive of the gold stars the teachers would affix to our foreheads in kindergarten. But is perhaps more reminiscent of the other gold stars -- the ones the Nazis affixed to Jewish clothing to identify the wearer to police and neighbors. Stars to keep you in; stars to keep you out.

The regulations are ostensibly aimed at denying terrorists U.S. driver's licenses, but the most recently accused "home grown" terrorists also possessed all of these supporting documents. So basically, this is more bureaucratic hoop-jumping, and collateralization of our data.

Possession of a U.S. birth certificate proves nothing, since procurement of said is the first step in creating a false identity. Also, there is a lack of reciprocity with the Federal i.d. system. Strangely, federal photo i.s. is not accepted by the state system, via Federal Homeland Security mandate.

Likewise, though the I.D. compliant state license proves one has all of the other identification, the Army required me to bring two i.d.'s, including an additional photo identification to replace my Army I.D.

(Strangely, denizens of the gun world so opposed to central recording of gun purchases don't make a peep about this central record keeping aimed at legal citizens obtaining driver's licenses.)

Incidentally, Non-Driver State I.D. requires the same documentation and costs $35. This seems absurdly high, considering that most people without cars are too poor to have them. Apparently, the state doesn't think them too poor to fork over the 35 bucks. Oh -- and they don't accept plastic.

posted by rangeragainstwar at 8:11 AM

You mean you didn't have your wallet dummy corded? No wonder you lost it. JK.

But yeah, you have to jump through the same hoops, i.e. proof of citizenship, just to have a job in the good old USA. I guess Uncle Sam needs to know where to send the Predator drones if he decides you're an enemy terrorist.

I sympathize. Iowa's going in that direction too - but not there just yet.

barca,The only thing i use a dummy coed on these days is my little ranger.
Without the cord i can't find him using 2 hands.
jim

Barca,
correction- the cmt should be cord, but not coed, but i reckon even a coed wouldn't help me in this endeavor.
jim

Jim, in that case feel free to pass on my email address to any interested coeds. ;)

Vermont is the only state to not require a picture on their drivers license I'm told. I believe they want to change that. I also believe that doing so may precipitate an insurgency. I use my passport for the bank, job, etc., etc., etc. Used to be a mans word meant something in this country.