RANGER AGAINST WAR: No Country for Old Men <

No Country for Old Men 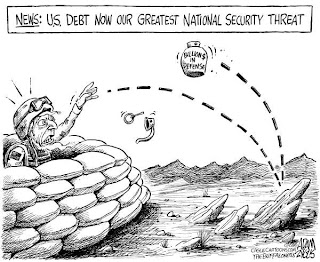 Ranger Word of the Day:

"American forces suffered a deadly 24 hours in Afghanistan, with eight troops killed in attacks including an audacious Taliban raid on a police compound in the key southern city of Kandahar, officials said Wednesday (Afghan attacks kill 8 US troops in 24 hours)."

We all understand that eight troops (= people) are dead, and will remain so. But remember that for every death there are usually ten other wounded. This implies 80 more veterans for the U.S. to take care of for the next 70 to 80 years.

This tail of wounded is not a good thing, though predictably the media will try and morph the extensive therapy and prosthetics as some sort of national good, something to be proud of. But this is not the main issue with the latest attack. This, however, is:

"Three U.S. troops, an Afghan policeman and five civilians — three interpreters and two security guards — died in the attack, but NATO said the insurgents failed to enter the compound."

The irrelevance of this statement shows the NATO representative has a complete lack of understanding of insurgent warfare. It does not matter that the attackers did not enter the compound -- they completed their mission when they killed eight friendlies! A more sobering thought: What if this was only a training mission for the insurgents?

The terrain is meaningless, as is the Marjah offensive and the Kandhar campaign. We may attack and we may hold terrain while we cover it by fire, but that is not a measure of success. Rather, it IS a measure of defeat when an occupying power of the Afghan government must launch offensive operations in major portions of their own country.

If territory is so contested, then so is it obvious the illusory nature of the shadow national government (theirs) which must wrest legitimacy before it can claim nationhood. The only thing that is being accomplished by NATO/US forces in Afghanistan is the continuance and escalation of the violence level suffered by the Afghan population.

If a government cannot command the ground or control the population, then it is not a government -- merely a roving band of killers little different from war lords, drug kingpins or taliban or al-Qaeda operatives. Same tactics, different masters.

Violence is violence, regardless the source or propaganda spouted by the engaged factions.

Terror is horror,
under any name.
Stalked by evil's night,
enemy target by day.

Undefined purpose,
unrighteous cause detracts.
Fear breeds bravery,
cause to be more right.

Soldier's duty calls,
matter not the cause.
Duty for the homeland,
opinion kept inside.

Soldier's fortitude is built,
courage from the right.
Focus on right reason,
resolve from righteousness

Some must fight,
some will surely die,
What better purpose than,
peace in liberty?

I just left a site that quotes from the NYT that an Afghan marksman trainee:

A seemingly routine training practice in marksmanship went fatally wrong on Tuesday when an Afghan Army sergeant turned his weapon on an American trainer and a gunfight began. When it was over, the sergeant, two American trainers and an Afghan soldier who had been standing nearby lay dead.

jim, basil: My understanding is that the shooting you're talking about resulted from an argument on the firing line.

The entire business just points up the idiotic nature of what we're trying to do.

This doesn't sound like some sort of ogga-booga jihadist "plot". It sounds more like like some goddamn knucklehead sergeants who forgot where they were and who they were dealing with and started shouting or otherwise fucking with this gomer like he was a typical American trainee. The Afghan probably just decided that his pride was worth more than his life and busted a cap on their ass.

Welcome to the land of the 11th Century, boys...

Chief,
A while back i saw a pic of a contractor teaching Afgh to fire AK's. ( As if they don't already.!)
Anyway he's the only Ami on line and he's outfitted in contractor chic and smoking a big cigar while on the firing line supervising the shooters.
This was a great photo of unprofessional demeanor.
So Chief,
I can guess that you may be right in your assumption.
Imagine -smoking on the firing line!
I shoulda been a cowboy.
jim

jim: you missed your opportunity. Imagine if you'd only been born twenty years later, you could have been that stud strutting around with your big cigar-pecker out talking smack to guys who have been killing people since before they could shave.

The sad fact is that a hell of a lot of these "contractors" I've met were the assholes you give the minimum NCOER/OER to when they were active. Yes, there are some decent ones. But there's a bunch that couldn't hack it when they had a green ID card, go work for the merc outfits, and end up pushing around these wogs and thinking their Class I download don't stink.

Interesting take here Jim. Glean from it what you will..

It's amazing. We started both of these "wars" off on the wrong foot - poor planning, lack of understanding of the enemy, dreamy thinking, a mismatch of tactical and strategic goals...

Yet, after exercising what is the final check and balance in our country, "throw the rascals out!" in TWO branches of government...

Talking about style: Maddow was in Afghanistan checking out rifle marksmanship training and the Italian trainer was wearing gear designed by Giorgio Armani.

Hell with wrong time, wrong birth era, you guys were in the wrong army!

I can't think of a job more iffy than training the Afghans how to shoot. It could have been an immediate reaction on the firing line, but could as well been a guy whose relatives got smoked on a misguided bombing mission, whatever.

Sounds about right to me. Except for that 70-80 years. DU exposure should easily cut that in half.

Grant, they used to say that elections had consequences. Seems that doesn't apply to the MIC. And doesn't that piss me off.

"Don't vote. That only encourages them."

The sad reality is that representation is a sham (since one person cannot possibly properly claim to "represent" even two different people without conflict, let alone 600k), and that the D's and R's are on the same team and it's vs. The American People.