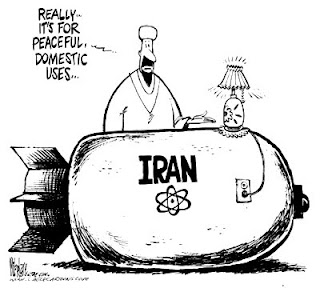 There's not a fight
And I'm not your captive

Deterrence is the art of producing
in the mind of the enemy... the FEAR to attack
--Dr Strangelove (1964)
______________
At the May UN conference on the Nuclear Nonproliferation Treaty, the U.S. via Secretary of State Hillary Clinton continued its efforts to rally the UN Security Council to impose new sanctions on Iran for its uranium enrichment program. President Dmitry Medvedev said this Monday that Iran is close to having the potential to build a nuclear weapon (Russia Warns Iran Mean Near Nuclear Weapon Potential).

Meanwhile, the U.S. reports the size of its nuclear arsenal at 5,113 weapons, an 84% reduction from the 1967 peak of 31,255 warheads. Though a reduction, surely enough to destroy civilization many times over. Even in the case of a misfire, surely this is a superfluous amount of nuclear weaponry.

With this sort of overkill potential, how can the U.S. claim moral authority versus Iran's efforts to gain or build a nuclear weapon? What allows the U.S. to have such a stockpile while denying the same sovereign principle to any other nation?

posted by rangeragainstwar at 12:16 PM

Persians didn't launch a war for hundreds of years, and afaik you need to look back to the times of Alexander the Great to find a war launched by Persians who were not under foreign rule.

Compare that with what happened to a neighbour of Iran in 2003...

Sven,
And there is always that.!

Frankly, the historical record shows that your likelihood of being attacked by nuclear weapons is:

Nations not possessing them: 100%

So, if I was Iran, and I knew that I was going to be on the receiving end of U.S. enmity, I'd want one, too.

The greater Nuke threat actually emanates from Nth Korea and soon, Burma. Oh don't forget that other small M.E. country that still refuses to sign with the IAEA or even acknowledge the widely known existence of what it has stockpiled - you know, that certain country that owns the US Govt.

Ah Burma and with a little help from thier new friends.
http://www.consortiumnews.com/2010/070710c.html