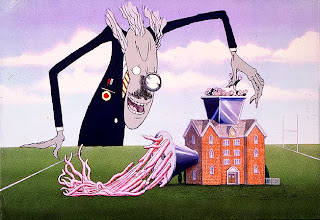 A fart is a pleasant thing.

It gives the belly ease...
It warms the bed in winter and suffocates fleas.
A fart can be quiet. A fart can be loud...
Some leave a powerful, poisonous cloud

Shit, Piss, Fuck, Cunt, Cocksucker,
Motherfucker, and Tits.
Those are the heavy seven.
Those are the ones that'll infect your soul,
curve your spine and keep the country
from winning the war
—Seven Words You Can Never Say
on Television, George Carlin

Hey, teacher. leave them kids alone!
--The Wall, Pink Floyd
_________________
My first essay upon return is based upon a conversation at a dinner gathering while away, specifically, the comments made by 3rd grade teacher Ruth. Since Ranger is told he is weak in emotions and feeling I'll try to alleviate that here.

Ruth explained that she received an ovation from the parents at Welcome Back night when she unveiled her "10 Prohibited Words" list, to be distributed to the hapless recruits on their first day back in prison. Among the words not allowed to pass their lips is "fart", a thing which for Ranger is both a feeling and emotional thing. [Lisa commented that this list would remove half of Ranger's vocabulary.] The implications of the prohibition are profound.

Of course, Ruth has nothing on George Carlin, who assembled a list of 2,443 "Impolite Words". There really are some dooszies here, but fart is nowhere to be found. Lame, it is.

Steven Dowshen, M.D., explains at KidsHealth.org, "All people fart sometimes, whether they live in France, the Fiji islands, or Fresno, California!", and goes on to explain the etiquette of performing the natural act. It seems his less hung-up approach is the more healthy. But what are kids to think when they are told they have freedom of speech here in the Home of the Braves, but they can't say "fart"?

We can't have it both ways. There is no freedom of speech when there are no-say word lists. Skullduggery is sown early, as the biological necessity is fake-obscured by the prohibition of its utterance. Out of mind, out of sight, and the whelps are taught early to muzzle themselves. Things are o.k. if we say they are.

Ah, the insidious lie! One cannot not fart, but one is told to not utter the word denoting the actuality. Herein lies the seeds of all future deceptions. "I will do it, because I must, or because it feels good" . . . but, I will tell no one. It may or may not be a bad thing I do, but I know it is a bad thing to say it. Maybe, depending upon one's religion, it may be uttered in the darkness of a confessional booth. But never -- NEVER -- must it be said in the light of day. Politicians were probably all taught never to say "fart".

Are we teaching students to be polite, or free, or simply obedient? Maybe a combination. We hear the mantra that the troops are fighting for our freedom, but how can this be if kids can't say fart in a public school? Keep in mind, the parents applauded the list.

Considering the topic itself, what can be more life-affirming than a healthy beer or oyster fart? Farts are an affirmation of life, and one could define death as the absence of farts. Clearly, hedonism is not part of the public school curriculum, but the kids will soon be thrust into the world of Miley Cyrus and Twilight, and have to make sense of it all. And they will have to do so without the word fart in their verbal toolkit.

So what's the problem with farts?

posted by rangeragainstwar at 10:37 AM

I think all the kids in her class should smile quietly and fart in their teachers general direction.

Silent but deadly, anyone?