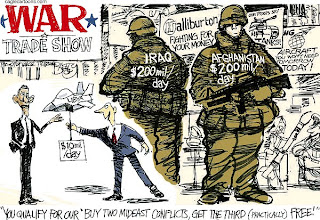 I'm a mummer, you're Moammer,
wouldn't you like to be a mummer, too?
--Possible North Atlantic Counsel recruitment jingle
for The Libya Show
(stolen from the Dr. Pepper commercials of yore)

As I rained blows upon him,
I realized there has to be a better way.
--George Costanza (Seinfeld)

Sorry, I just don't get it. The U.S. is for militants (in Libya), except when we're not (in Iraq and Afghanistan):

US likely to keep combat role after Libya shift (AP)

AP - U.S. warplanes will keep flying strike missions over Libya even after the U.S. relinquishes the lead command role to NATO as early as this weekend in the fight against Moammar Gadhafi's forces, the Pentagon indicated Thursday.

In addition to bombing yet a third country in a decade, the U.S. via its NATO affiliation is soon to enforce a "no-drive" zone upon Moammer, to be known as DWM (Driving While Moammer):

NATO also agreed to launch military planning for a broader mandate, including a "no-drive" zone that would prevent Libyan leader Moammar Gadhafi's armor and artillery from moving against rebels his forces had been routing before the coalition's air assault began late last week. The North Atlantic Council is scheduled to meet on Sunday to consider the plans (NATO takes command of part of Libya operation.)

And what's with the new spelling, "Gadhafi"? The guy's only been running Libya for how many decades, and we still don't know how to spell his name? The U.S. and its military are acting like a bunch of loose cannons.

How can we keep the faith when we don't even know what it is?

Just another country that has minerals that we consider belonging to Amerika and the rent due.
jo6pac