RANGER AGAINST WAR: I Need a Dump Truck Mama to Unload my Head <

I Need a Dump Truck Mama to Unload my Head 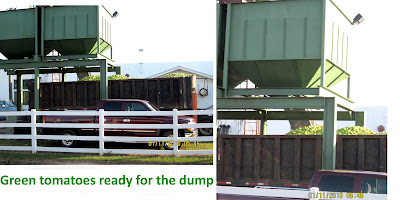 Gleaning, that's the old way.
My mother'd say,
"Pick everything up so nothing gets wasted."
But sadly we no longer do…
--The Gleaners and I (2000)

There are no seasons in the American supermarket.
Now there are tomatoes all year round,
grown halfway around the world,
picked when it was green,
and ripened with ethylene gas.
Although it looks like a tomato,
it's kind of a notional tomato.
I mean, it's the idea of a tomato
--Michael Pollan, Food, Inc (2008)
____________________
Whatever you say, take a look at the dump truck full of tomatoes taken in Ranger's town. It reflects the bounty of our truck farming system (and ancillary pesticides, herbicides and other toxic things.)

But these tomatoes are deemed unfit for market as they might have a small patch of red or pink on them, and are bound for disposal. Only hard, green balls will be shipped throughout the nation, to be displayed under plastic at market as genuine "Florida-grown" tomatoes. Before that time, they will be gassed in order that they appear pink or reddish; they will be mealy in flavor but provide the necessary color for a salad, which the American food gods have deemed will be light Iceberg green and red (heaven forbid we should have refulgent, juicy foods which would wake up our palates.)

In the packing house they separate the unripened green balls from those fruit which had the misfortune of beginning to ripen on the vine. The latter are not for consumption, and are dumped in a lot to rot. 30,000 pounds of the unsuitables are dumped every two hours during harvest season, and these truckloads run all day. And that is the waste from one packing house, and there are about six in town, making the total about 180,000 pounds per 2 hrs.

In the old days, pinhookers would salvage the reject (= ripe) tomatoes and sell them on street corners. This practice is no longer allowed.

Here is where Ranger goes all weak-kneed and decidedly un-teabagger, yet he realizes he can't go full-bore because he is writing this from the obscene bounty of an all-you-can eat buffet. Well, that is America -- a place you can talk about poverty and hunger while chowing down. That is what makes us so great, and so contradictory.

We have such plenitude that we dispose of it by the dump truck load, but have hunger in our community at the very same time. Do the growers care? Obviously not. The bounty of the field is left to decay, while food stamps buy the owners a meager ration at the market. As an aside, there is a small initiative amongst some farmers who sell at local farmer's markets nationwide to allow food stamp users to double their rations as incentive to help them buy local healthy foods (The Food Trust); there is only one Florida member, in Miami. Though it is a great idea, we doubt it will go far as it competes with Big Agra, and his pockets are deep.

The Agnes Varda film, "The Gleaners and I", peers into the world of people who use the imperfect, and how the farmers can protect their interests at the same time. The USDA estimates 130 pounds per person - up to 1/5th of our food - ends up in landfills each year.

In France and other countries where gleaning behind the harvest is allowed, there are strict rules about how the process may be done. The plants must be respected, to allow for future harvests. If we in the U.S. could cultivate that respect, both for gleaning as a project and amongst the gleaners themselves, we could have a more efficient consumption cycle.

Unfortunately, we have somehow efficiently dismissed bartering and gleaning from our behaviors, in favor of constantly upgraded, purchased possessions. But this is not the only way, and many advanced societies have several days a year when they put discarded but usable items on the sidewalk for others to claim. Now that is an environmental initiative.

Whatever your creed, consider whether there might be a better way to utilize the goods available to you.

posted by rangeragainstwar at 4:10 PM

A good, and familiar, quote.

Many years ago in this isolated mountain community most farmers would sow their fields with various greens after the main harvest. The fields of early spring greens were open to the community for picking. Most people had early greens in their home gardens but hitting the big fields to gather greens was kind of a social event.

Unfortunately, the custom died out about 30 years ago.

Avedis
I've often thought - what can be an alternate use of these discarded items.
Canning is an idea, plus here in the deep south fried green tomatos are very popular. Hell, anything fried is popular hence all the fat assed people.
Now for local color. We have a yearly tomato wrestling competition in a local red neck bar. Yep, they wrestle in a vat of tomatoes. It's female only and is a cultural event. I've never gone to see the display of southern femininity.
jim

[FYI -- your comments are still being blocked from R.A.W. for some reason. Perhaps check your filters. They do show up in our INBOX, however, so I will re-publish it below.]

"Throwing away those tomatoes is bizarre for the moral reason you mention, but also because it seems like they could still be useful in some capitalistic way. Why not make salsa or sauce out of them? They would canned immediately and the whole shelf life thing becomes moot.

"Maybe someone is afraid that if not destroyed they'd be used as ammo to be thrown at policians?"

Like so much in our society, functions and specialties are not linked; everyone has a discrete niche.

So instead of the salsa or marinara factory that should be opening next door, we have a tomato packing plant and . . . utter, abject waste.

Lisa and Avedis,
I believe the canning thing is limited by the type of tomato being grown.
This type cannot be processed into catsup or salsa.
Just what i hear.
jim

AVEDIS,
Why would we block anything that you say? Seldom do we do so. If someone is a troll i just ignore their nutless comments.
You are always appropriate, and i enjoy your presence.
jim