RANGER AGAINST WAR: A Country for Old Fools <

A Country for Old Fools 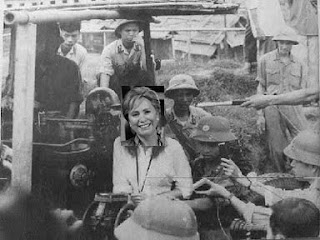 For my military knowledge,
though I'm plucky and adventury,
Has only been brought down to the beginning of the century;
But still, in matters vegetable, animal, and mineral,
I am the very model of a modern Major-General
--The Major-General's Song, Pirates of Penzance
--How'd you sleep?
--I don't know. Had dreams.
--Well you got time for 'em now.
Anythin' interesting?
--They always is to the party concerned.
--No Country for Old Men (1987)
____________________

Last night my nightmares returned me to the Vietnam War. Since time had regressed, Hillary had taken Jane Fonda's position, this time on a Libyan anti-aircraft gun, goofily looking through the sights as her assistant gunner John McCain prepared to feed rounds into the piece.

How much more bizarre does a nightmare get? Fonda was called a dupe and a traitor for supporting the Viet Cong's right to overthrow the Saigon puppet regime, yet McCain has now supplanted her in supporting his heroes, who happen to be the equivalent of his former enemy, Victor Charlie (Sen. John McCain says rebels fighting Gadhafi troops are his heroes during visit to east Libya).

The Libyan rebels and the VC are the same critter: They lack legitimacy, are not in accordance with the laws of their respective governments and are in open rebellion. Does McCain see the high irony of opposing the rebels in Vietnam War yet heralding their moral equivalent as heroes in Libya?

Neither McCain, Clinton nor O-bomb-a can clearly explain why it is incorrect for Moammer Qaddafi's troops and loyalists to attack and kill rebels, while at the same time supporting the "rebels" for doing likewise to Qaddafi & Co. Where is the sense, especially when a cash-strapped America must get the operational funds to do so at a Chinese Title & Pawn Shop?

In a word, McCain has once again pulled a flip-flop. McCain was bombing the folks of North Vietnam because they were supporting the rebels of South Vietnam. Now, he has done an about-face.

As for Clinton, it is equally difficult to understand her warmonger stance as a former Flower Child of the 60's. Clinton was the picture of a liberal intellectual, so how did she end up taking Jane's seat supporting the rebels?

Ranger wonders why Ms. Fonda keeps her mouth shut these days. Where is her outrage at the U.S. actions in Iraq and Afghanistan? Where is any outrage for that matter?

posted by rangeragainstwar at 8:40 PM

I dimly remember a few years ago Jane Fonda denounced the wars, and immediately she was re-vilified for her Vietnam antics. She might have felt her help wasn't wanted. Even stars have feelings.

"Where is any outrage for that matter?".
At the gas pumps...?

Jane Fonda is busy husband hunting. She appears to be a woman who is incomplete without a husband.

Hilary Clinton is and has always been a Republican and an ambitious opportunist. She was crazy for Goldwater, for god's sake!

My intelligence and reasoning power are not high, but I can tell you that Arizona is a benighted, knuckledragging, third-world pesthole of a state. I live here and like it quite a bit, in spite of the aforementioned. Mrs. UC does not like it, not one bit, and she refers to our charming part of Arizona as the GFFHH--The God-Forsaken-Fucking-Hell-Hole.

Neither of us vote. Voting only seems to encourage people like Grandpa Walnuts, and we wish the politicians would just go away and quit bothering us.