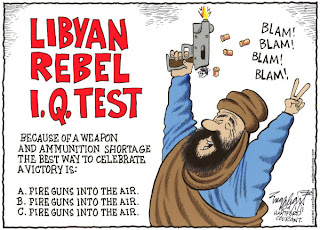 You made me promises, promises

Much like dealing with a squirrely person, reading the news today requires considerable skill at verbal jousting. Take the Associated Press's recent, "US to give Libyan rebels non-lethal aid":

"President Barack Obama intends to use his so-called drawdown authority to give the opposition, led by the Transitional National Council in Benghazi, up to $25 million in surplus American goods to help protect civilians in rebel-held areas threatened by Libyan leader Moammar Gadhafi's forces."

To "help protect civilians in rebel-held areas threatened by Libyan leader Moammar Gadhafi's forces": So, rebels/insurrectionists are now "civilians"? We wouldn't be protecting the rebels, would we? Because we don't usually like rebels; they tend to de-center tenuous American puppet regimes.

"Secretary of State Hillary Rodham Clinton . . . said the aid would go to support the council and 'our efforts to protect civilians and the civilian populated areas that are under threat of attack from their own government in Libya.'"

Ummm ... isn't it the other way 'round?!? This is not a very esoteric chicken-and-egg question.

"'This opposition, which has held its own against a brutal assault by the Gadhafi forces was not an organized militia,' [Clinton] said. 'It was not a group that had been planning to oppose the rule of Gadhafi for years. It was a spontaneous response within the context of the broader Arab spring. These are mostly business people, students, lawyers, doctors, professors who have very bravely moved to defend their communities and to call for an end to the regime in Libya.'"

Well, when you put it that way -- just a bunch of good guys, like lawyers and professors (presumably not of the William Ayers stripe.) Not ruffians or hoodlums. It was just one of those things y'know, and surprisingly, their government has moved to squelch an internal rebellion. Golly, I'm sure the U.S. government wouldn't do such a thing to rebels here at home. (Right -- Ruby Ridge and Waco were just mild overreactions to some unusual people.)

Yup, close-readings required these days. It helps if you've had a logic class, too.

The Suicide Machines? I Google-Tubed 'em, and sumbitch, not bad! I'd not heard of them before.

Nice to have along a fellow traveler :)