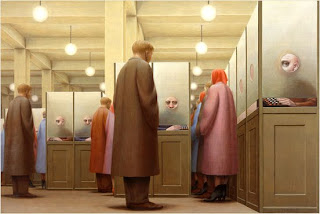 [H]e realized at once that he shouldn't

have spoken aloud, and that by doing so he had,
in a sense, acknowledged the stranger's right
to oversee his actions
--The Trial, Kafka

--We're going to have to ask you to leave, sir
--I did not watch my buddies die face down
in the muck so that this fucking strumpet could abridge
my right of free speech
--The Inimitable Walter Sobchak in
The Big Lebowski (1998)

However, Floridian Ranger's freedom was recently curtailed by the government of the free. He received a letter from the Social Security Administration claiming that his SSA benefits since April 2008 have been in error, and that he has received an overpayment of $350 per month, and that he now owes his government over $10,000.

No data was given to explain the overpayment; no figures produce or explanation given. Ranger has no idea the propriety of this allegation, and must now navigate the labyrinthine bowels of the SSA in order to find the origin of this alleged error.
In his initial foray into the SSA office he was told he needed to file an appeal to uncover the data behind the demand for payment of the $10,000+. The totality of his knowledge is that his payments have been fucked up since April 2008, and not by anything he did or did not do. The burden of proof is upon him to discover why the allegation of overpayment, all because some dumb-fuck SSA employee put him in this predicament, and he so stated: "This is fucked up!"

At this spirited summation of the incompetence surrounding him, the SSA representative told Ranger that swearing was not permitted as it violated office decorum, and "this is a public place." Well, that riled Ranger sufficiently to see the hypocrisy in his admonition. As Ranger saw it, he can BE fucked over by the functionaries, but he daren't declare it.

Ranger replied to SSA Rep Roberto that he would say what he pleased, (and, Walter Sobchak-like) that he carried scars reflective of his sworn duty to uphold The Constitution and asked Roberto if he was sworn to uphold The Constitution, also (came no reply.) Not only will Ranger possibly have to pay a great sum of money for the ineptitude of our government, he discovered the SSA was curtailing his civil rights, of which free speech is one.

What is freedom of speech if one cannot be profane in a government office? What is protected speech? Is the word "fuck" adequate justification to deny service to taxpaying citizen? Why have free speech if it really means, "polite free speech"? Being polite does not = free speech. Where is the freedom if we are all polite, if we all engage in that unctuous Southern practice of false politesse?

Ranger can understand a private employer putting certain constriction upon customer's behavior, but a government entity encroaching upon his freedom, at that moment, was too much. If SSG Miller died fighting for his freedom, why hasn't the SSA gotten the word?

We have addressed free speech as taught to our students (Fartwah) and in many posts as imposed upon our soldiers. Now it is clear we citizens are being muzzled, too. If our rights are "God-given" as postulated (*snicker, snicker*), how can a government agency's policy or employees restrict that free and open speech?

Fucked up might not be polite, but it sure does sum up the shooting match.

posted by rangeragainstwar at 10:32 AM

Jim that is totally FUCKED Up. I feel for you. Maybe this is why they are skimming off you vets. Again. http://news.yahoo.com/s/ap/us_us_libya_opposition It just keeps getting more FUCKED up, isn't it?

Might be an anti-american blog spot tax....Remember the Orwellian Homeland Security bleat, 'Report anything suspicious'..... Tell them that you seem to have lost your 2nd Amendment right's, now that's Fucking suspicious....as for the 10 large, what are they gonna do send you to Vietnam ?

PS: Next time cuss them out in Vietnamese....

One of my favs! notice how many Brit commenters played this at relative's funerals? You'd never see that in the U.S. where death is a right somber and profitable business.

We'd thought about this as a rather steep blogging tax.

Carl,
I did tell Roberto that we spent 830 million bombing Libya, so why not just give me the 10 large.
We spend money killing people then chicken shit our senior citizens for nebulous debts.
FUCK ME!
jim

BH,
If i thought you are correct then this'd push me around the bend.
It's easy to be paranoid, but this is just total incompetance symbolic of our decline.
I do know a few VN choice words.
It's hard being an adviser and not absorbing the local color.
The key question here is-WHAT CAN I DO ABOUT THIS CRAP?
I would like to clarify that my blog/writings are pure pro american.Both of us earned our right to express our pov.
jim

Ranger,
You are around the bend if you didn't catch my tongue in cheek drift. Well, I'm up the bend a bit. If you think this is case of bureaucratic bumbling that's fine with me. But I think there's a lot of 'patriotic' Americans that would like to shut up a lot of people, including you. How? create conditions of fear, confusion,and feelings of helplessness.
I just reread William Sargent's 1957 book, 'Rape of the Mind', make yourself a checklist and get back to me. FYI, William Sargent was a researcher for the CIA's top secret MK-ULTRA Project that ran from the 50's to the early 70's. Almost forgot, William Colby, Director of the CIA, apparently lost 20 years of records on the way to the Church Hearings in '73. Bureaucratic bumbling? Is it evil to call a thing evil ? Patriot Act !

'BTW, I meant 1st amendment rights and NO disrespect.

BH,
i took no offense.
How about losing/erasing the torture tapes. CIA. UMMM.
jim

Just give 'em back their 10 large so we can keep the wars going. Sheesh, what kind of American are you, anyway? :)

The "death panel" dept. will straighten it all out.

Dave,
This incident w. ssa is exactly the same as a predator strike that kills innocent civilians.
This event is so disconnected from reality b/c the mistakes do not require /demand any personal responsibility from the government pogue that did the actual act.
Whoever fires/directs the drone is still a murderer even if he's just controlling a joy stick. Disconnected is not a release from responsibility. Will the ssa geek making my problems ever be disciplined or forced to face consequences.
That's it in a nutshell.
jim

Exactly! There are no consequences for malfeasance in government. Note especially the po-lice. Whenever they shoot someone, it's always "justified."