RANGER AGAINST WAR: In Mind Country < 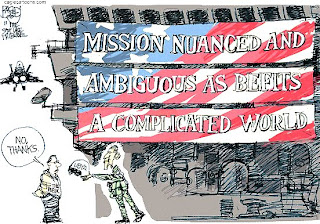 We will have to repent in this generation
not merely for the vitriolic words and actions
of the bad people,
but for the appalling silence of the good people
--Martin Luther King, Jr.

From Special Forces: The Changing Face of Warfare -- "Watts appreciated that however much the policy of hearts and minds might weaken the enemy, it would never destroy him" [Lloyd, p.109] Note for 2011 Pentagon warriors: they are speaking of the enemy, for one need not win the hearts and minds (H & M) of friends, an obvious but little emphasized point.

This got Ranger thinking about his particular neuroses and psychoses that add up to his personality, and how they meet the erosion of sanity in U.S. policy in his lifetime. Specifically, the run-up to our current imbroglios, Gulf War I which turned a local oil and terrain squabble between two absurdist states into a coalition to liberate Kuwait from oppression.

During the time of that campaign Ranger was in a Department of Veterans Affairs-sponsored therapy group for PTSD veterans; all were Vietnam veterans except the facilitator, bought and paid for by DVA. He was a non-veteran academic pretending to understand our points of view.
To my memory, the facilitator and most groupies were Gung-ho about the new war, forgetting the fact that all of us were fractured by a similar war 20 years prior. One ooh-rah group member, K-2 -- an SOF/130 Aircraft Gunship type -- was fine until a 130 AC was shot down and all aboard killed. My comment was, "They got what they were dishing out," which earned me an expulsion from the group for being TOO HOSTILE, which according to the PTSD diagnosis is a common attribute of the disorder.

What has this got to do with H & M? In Gulf War I, H & M were not discussed; we just killed the hell out of Iraqis and everyone cheered, even PTSD-plagued veterans. But in Gulf War II we have vacillated between H & M-ing them and Seven Six Two-ing them, all the while hailing the validity of Counterinsurgency policy (COIN). (So successful were we that the Iraqi parliament recently affirmed that Hammurabi's Code was in accordance with Sharia law, and the COIN actually predates the Christian bible; Ranger is undercutting Glenn Beck's comeback here.)

Point is, H & M is a con job perpetrated upon the U.S. taxpayer but we're too myopically-focused on the back streets of the Arab world to see this. Enter Libya -- the most recently discovered Arab ne'er -do-well -- and the U.S. does not even attempt to win the H & M of Qaddafi loyalists (our erstwhile, sort-of, friends.) So the U.S. bombs and presumably later will give the H & M shtick a go. When will the U.S. military realize is not very good at this H & M thing; they did not win mine, and they will not win the enemy's.

Where is the sanity in selectively employing a failed policy in an insane world? We have a fiction called COIN and it does not win H & M, and we have a policy called bombing that does not win low-intensity conflict, guerrilla wars or wars of rebellion.

Expecting otherwise is like willing time to run backwards and hoping Saigon is not Ho Chi Minh City.

posted by rangeragainstwar at 8:47 PM

GD,
We're doing a thing on Detroit.
You're welcome to read it, but it might confuse you since there's no building going on there- we only build up shit hole countries these days.
jim

Congrats Jim, you have the VA's highest PTSD award....HVP (high violence potential) You are entitled to free thorazine for life...How do I know?

BH,
Au contraire- they tagged me hostile, not violent.
There's a difference.
I wouldn't hurt a fly.
jim