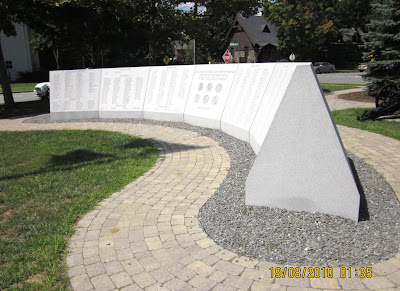 In the bungling and bellicosity that constitute
the back and forth of history,
worsened by natural disasters and unprovoked cruelty,
humble citizens pay the highest price.
--Paul Theroux

Blessed [are] the peacemakers:
for they shall be called the children of God
--Matthew 5:9

Understanding that a peacekeeping is not the same thing as a peacemaking . . .
When traveling Ranger sticks to the routes that lead to the small towns; his destination, to find the heartland in each region. Much as in Europe, most small towns here have war memorials, and it is disquieting when passing through these towns, many of which so faithfully memorialize their war dead, to realize the number of men who were sacrificed for our country.

For the smallest towns it is almost outrageous the number of men who didn't come home -- men not easily replaced, men who were the solid core of a slice of America. The vacuum left behind must have been staggering to all involved, and the losses were not a one-time occurrence.

In one town, the Vietnam KIA's outnumbered the WW II losses; in another, Korea had claim on that honor over the Republic of Vietnam. One town among the many with such memorials is the tidy little enclave of Walpole, N. H., home to documentarian Ken Burns and located in the Monadnock region, childhood stomping grounds of Lisa's mother. The town is very much as it was 70+ years ago, and could serve as a Twilight Zone set of prototypical small town America.

The Walpole war memorial was one block off the downtown square, and was among a small walking area divided according to conflict. The names of the killed were chiseled in stone long after any heart remembered the actual faces -- young men forever lost.

The last chiseled panel was dedicated to "Peacekeepers". Not everyone realizes that peacekeeping can be a deadly pursuit, and many people died from this little town trying to keep the peace in far-flung zones. One wonders what peace they were trying to keep, and how long -- if at all -- it was kept. Whatever the answer, they ended up becoming a memory etched on a cold granite section of wall.

But the peacekeepers recede as one pans to the final panels, for the town of Walpole has had the foresight to place totally empty panels of granite at the end of the wall, to be filled in as needed, as new wars arise and new dead fall.

Iraq and Afghanistan will be ninth and tenth on Walpole's tally of wars that have gobbled up soldiers as if they were Girl Scout cookies. Now, we can anticipate new work for the chiselers on a wall called "Libya", or maybe they'll go under "Peace-Keepers", depending on how the Men Who Label Wars decide the matter.

But whatever the categorization, servicepeople keep dying and some tourists dutifully witness the names on the plaques. The continuity of such death in a society dedicated to the pursuit of happiness is a thought worthy of consideration.

GD,
Gardens of Stone is one of my favorite RVN books, and fav movie.
Really well written with a great understanding of the Army.
I also liked In Country.
Both were about the Stone Garden.
jim