RANGER AGAINST WAR: Stirring the Pot < 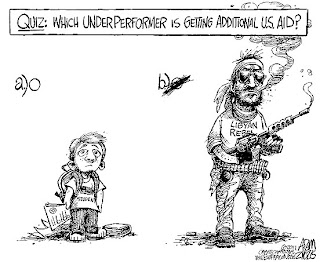 Is you is, or is you ain't my baby?
Won't you tell me please, I gotta know

Hey, you, get off of my cloud
Don't hang around 'cause two's a crowd
on my cloud, baby
--Get Off of My Cloud, Rolling Stones

If you don't know where you're going,
any road'll do
--English saying
____________________
The games the politicians play are disconnected from the results of their policies, which are always strapped to the backs of the citizens, trusty mules we are. If they would only lead, versus politick.

Would anyone 60 years ago have imagined the Fantasyland that government policies have wrought? Does it matter that we won a Cold War when we are now devolving into Iron Curtain status ourselves?

Does it matter that Afghanistan and Iraq are free and democratic (sort of?) Did it really matter if Iraq had Weapons of Mass Destruction (WMD)? Does it really matter that there is an al-Qaeda hostile to America? Do we realize that our own policies are hostile, and that WE export violence?
Do we realize that our Department of Defense policies add to the drain of dollars from our domestic lives? Our military policies adversely affect our economy and our people, and to what benefit? And to what detriment?

Now the U.S. has gone from assuming the onus of "protecting" rebels to supplying said rebels in Libya so that they may take out the sovereign leader of their nation. Iraqi and Afghani rebels: BAD; Libyan rebels: GOOD. Why are we meddling in the internal affairs of sovereign nations? Who was President Obama to tell Egyptian President Hosni Mubarek to step down? Our President is not president of the world.

Do we know what Democracy is about anymore, or are we are just deluding ourselves? If the reason for going into Libya is to protect the "innocent" civilians who are anti- Gaddafi from his brutal army and secret police, why are we not doing the same to Iran, Syria or any of the other states that are oppressing their peoples? The U.S. never lifted a finger to protect the protesters in Iran or Syria, so why Libya. Seems one rule for some and another for others.

Our venture into Libya will only incur the wrath of Gaddafi's supporters and help al-Qaeda consolidate power. It's a lose-lose scenario. Despite the exhortations of John Kerry and crew, air intervention in Libya is military intervention and arming the rebels is foolhardy and short-sighted. How many times has the U.S. armed the rebels only to see them become our eventual enemies? The unasked question is, if we arm the rebels now, at conflict's end will we be able to disarm them?

Why has the U.S. betrayed it's neutral hand and not simply urged Tunisia, Egypt and Libya toward a peaceful and bloodless outcome? When did we become instigators rather than negotiators for a regime change.

posted by rangeragainstwar at 7:42 PM

"If they would only lead"

I don't share your hope-springs-eternal-optimism for the stupidly brutal thing we call government.

"Leaders? Where is it that you think you're going, exactly, that would require you to have a leader? If you just live your own life and mind your own damn business, exercising your own talents, pursuing your own dreams, striving to be what you believe you should be, what possible use would you have for a leader?

In his own mind, Obama is President of The World, and why not? The sheep here are safely subdued and even enjoy slavery--so let's hop on a jet and par-tay!

Vedder did a good job with "Society" -- good choice.

We need a government that will promote the general welfare, etc., of OUR people. Instead, they concern themselves with insuring their investiture for as long as possible by distracting the people with endeavors that make them seem impossibly, impenetrably, indispensable.

I had a discussion tonight with an otherwise intelligent man who spoke of Obama's obscure and unknowable plans that we can't know about -- "nuanced and ambiguous, as befits a complicated world."

Excellent post J/L. I wonder whether the perpetually appointed (selective) savior of the world US Pres would be at all interested in finally getting rid of the Burmese regime? Hundreds of thousands of innocent poor men, women, Buddhist monks and children have been and still are, slaughtered by the super wealthy military regime. Now some top dog Burmese generals have put their uniforms in the locker and wear suits after the "election" - they must be legit "leaders" on the world / UN diplomatic stage..right? Meanwhile the Thais have announced they plan to forcefully return over 100,000 impoverished refugee camp Burmese (who are mainly from the NE Shan state), back over the border. Yet more blood sacrifice to appease the wealthy & powerful gangs uh politicians, on both sides of the map line..

Well, you could always submit your Burmese request in triplicate to your representatives, being sure that you include any benefit to be reaped by the U.S. for said intervention (not that that even seems prerequisite anymore for sending our military to go farkling about smartly in some far-flung disaster.)