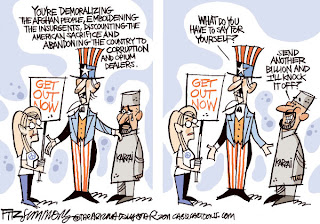 Round the decay
Of that colossal wreck, boundless and bare
The lone and level sands stretch far away
--Ozymandius, Percy Bysshe Shelley

I don't need no arms around me
And I don't need no drugs to calm me
I have seen the writing on the wall
Don't think I need anything at all
--The Wall, Pink Floyd
__________________
The military's concept of Man Days is an estimate of how many days it would take to complete a specific project. An example: A Corps Support Annex to an Operations Order could take 20 man days to complete. Let us extend the idea to MAN YEARS.

An example of the application of this larger concept would be the Pyramids. How many man years were used to execute that monumental task? It is estimated that it took 100,000 men decades to complete the task. Let us apply this concept to the wars in Iraq and Afghanistan.

Let us use 1o years as the length of the Afghan War, another great desert project undertaken with a correspondingly large number of man years. If the average yearly strength was 100,000 soldiers and 35,000 contractors, the total is 135,000 x 10 = 1.35 Million man years expended only in military effort in Afghanistan. Add in NATO, the United Nations, and political man years into the mix and the figure is even more impressive.

Let us add in Iraq, with approximately the same Man Year outlay for, say, eight years. To arrive at the correct military burden at any given time, we must add in the personnel stationed in the Philippines, the Horn of Africa, the Trans Sahara, and all of the world's other hot spots.

Up against our current outlay of Man Years, the pyramids seem like an easy project, as it was finite. And they actually built something which has lasted for a few millennia.

Ultimately, it is all sand in the wind.

posted by rangeragainstwar at 7:07 AM

This reminds me of an old quote by Wernher von Braun, "Crash programs fail because they are based ont he theory that if you take nine pregnant women, you will get a baby a month."

It's been said that the sure sign of insanity is to keep doing the same ol, same ol all the while expecting something different..

Old man now who was a kid when we started, then became a 3d Marine for to the Vietnam still quotes an old adage from a poster on one of our college professor's posters:

"The dogs bark but the caravan moves on."

Move on, nothing new here.

Point well taken Jim. I thought to myself after reading your article and doing the math, how many man years would it take to fix the broken, deliberately underfunded and understaffed VA hospital system ?

If our military/industrial complex, who are laser-like focused on money and the bad guys 'OUT THERE' turned homeward, all Veterans could get the care they so desperately need and deserve and I doubt it would take 1/10th of one percent of the Man Days we're expending on the 'War on Terror. Keep up the fire,
BH

BH,
My figures are guesstimates since this info is hard to verify, but the concept is valid.
We could've built a pyramid in Las Vegas,imported a few camels and made it a tourist trap.
Another idea would've been to put in on a pueblo gambling casino back lot.
The DVA will surely face cuts in the coming years. We'll call that a victory dance.
jim

[private request: are you still with Comcast for email?]