RANGER AGAINST WAR: The Long and Short of It <

The Long and Short of It 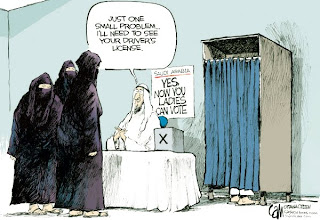 We have to free half of the human race,
the women,
so that they can help to free the other half
--Emmeline Pankhurst

Dozens of women have taken to the streets in Saudi Arabia behind the wheel of a car in 2011 to protest for their rights. In response, the court sentenced one of the women to 10 lashes for her impudence (The King apparently rescinded this poorly received verdict last week.) King Abdullah must have recognized that it clashed with his ordination that women shall be allowed to vote and run for public office come 2015 (when pigs will also take to the air.)

Saudi Arabia is, of course, our friend (or at least, some American's friends), and women's rights are curtailed in that kingdom. Moving from a friendly Muslim nation to Afghanistan, women's rights are even more imperiled as the pretense to parity with the West is stripped away. One thing RangerAgainstWar most resents in the current wars is the fib that we are fighting for everyone's liberation. Three Cups of Tea makes everyone feel good at the ladies book clubs (when they are not weeping over The Help), but the reality is more stark than the efforts of a possibly well-intentioned, self-promoting tea tippler.

On a recent shopping expedition, Ranger noted an Islamic couple, she in the black burqa, appearing to be pregnant, he in the typical Florida summer garb: Sockless sandals, shorts and T-shirt. He was properly dressed for the sweltering and humid heat because he was endowed by Allah with a penile structure, and so was as comfortable as possible. She, however, was quite the opposite. Oddly, seen driving away, she was the chauffeur.

Private preferences are just that, but we are ostensibly fighting wars for other's liberation and have not a clue as to what motivates them or constitutes their standards of compassion or equality. How will the U.S. reach an accord with a culture who's God mandates such gender inequity? Juxtaposed against the barely veiled breasts and bottoms of American young women, how can one imagine we are on a campaign toward solidarity?

A salient tangential observation is the riven nature of our own culture, a goodly portion of whom still believe Eve was a sinful wench who led to the fall of all mankind, ergo, women are not to be be trusted or equal, or something which keeps them earning less than men, the true test of equality in our economic caste system. How can an entity suffering such lack of unity impose anything upon another?

More to the point, David Ignatius wrote about General Mike Mullen, departing chairman of the Joint Chiefs of Staff last week: "He muses that it’s odd to be lecturing Iraqi Prime Minister Nouri al-Maliki about governance when 'there’s a lot of things we don’t get right” at home' (Adm. Mike Mullen's Legacy). It's called hypocrisy, or cluelessness, to be charitable.

posted by rangeragainstwar at 7:45 PM

"How can an entity suffering such lack of unity impose anything upon another?"

Interesting, how can an entity suffer from a lack of unity ? Easy, delude yourself into thinking the word or construct, entity (latin root, meaning 'to Be' ) can suffer a from lack or unity. Observe our Country's current moral, cultural and political zeitgeist, ALL ROADS LEAD TO NOWHERE. The refusal to face this truth is the foundation of this 'brave new world'. So we can blindly call things what they are not.

Haven't you ever seen The Lone Ranger, Dave?

It's been a while since I returned to those thrilling days of yesteryear, but Duncan Renaldo, The Cisco Kid, rocked his black ensemble and his horse was black, too. And Chuck Norris' character, John T. Booker, was a Vietnam Vet who ultimately triumphed over the CIA in Good Guys Wear Black.

I mean, for either the guys or gals, would a dash of fuscia or a baby-blue stripe hurt? Doesn't Zippy The Pinhead's yellow robe with red dots give him a commanding presence? Would Yasser Arafat have risen to the pinnacle of power if he had worn a plain white headdress?

Why does King Abdullah Bin Abdul Aziz tie up his headdress with a black band? Is it a style statement, or is it a symbol of his sympathy for the sistas?

Thank you, Dave. Sometimes I do get tunnel vision.

A little zippy-ness never hurt anything :)