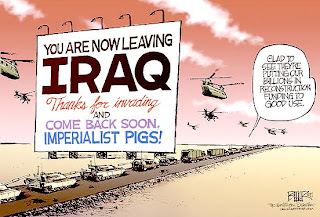 "Was it worth it? I am sure it was.
When we first came in here, the Iraqi people
seemed like they were happy to see us
--Sgt 1st Class Lon Bennish, 3-tour Iraqi veteran

A basic rule of combat operations is not to move or place any unit anywhere unless it has mutual support -- visual, fire or both. The actions at Waygul and Miller, Murphy and now Meyer's Medals of Honor all violated that rule.

It is usual to have eye contact between units and that eyeball space is always covered by obstacles and fires, both direct and indirect. When visual contact is lost, so too, is the battle. Classic examples of this failure include Custer's Little Big Horn and The Battle of the Bulge, when units were too separated by distance to plug the gaps. Have we forgotten our hard-won ground combat sense?

Meeting engagements (or, "approach marches") are characterized by uncertainty and are difficult to manage UNLESS the friendly unit forward is part of a tactical movement with combat power in-depth, to include vertically. Space must be considered multi-dimensionally.

When and if we fight these engagements as a one-on-one fight, we are always going to be the designated loser because insurgents and guerrillas will not engage unless they have already prepared the battle area. Insurgents do not fight unless it is to their projected benefit -- the logistics of asymmetrical warfare dictate this theoretical given in unconventional and guerrilla warfare (UW/GW).

The fights we have read about in Afghanistan lack depth and do not qualify as battlefields. They are simply desperate men fighting for their lives, to no tactical advantage or gain.

The goal of all classic ground combat is to make contact (usually through a movement to make contact) and then fix and destroy or defeat the enemy through fire and maneuver. The War in Afghanistan is all fire, with no apparent successful maneuver.

Meeting engagements are always riskier and more difficult to manage than planned operations. The meeting engagement requires flexibility, maneuver and tactical proficiency in developing rapidly changing scenarios. In classic ground combat, major units -- such as Armored Cavalry and Reconnaissance units -- specialize in these types of actions. Both examples feature highly mobile forces with exceptional dedicated to the maneuver element.

Additionally, meeting engagements often result in fixing the enemy and then bypassing to attack deeper and more productive targets. Deep targets are always a priority, yet in Afghanistan we rarely see this type of action. This indicates that our operations lack depth and purpose beyond contact.

We will close by pointing out that Custer's fight was a meeting engagement. We know how that turned out.

posted by rangeragainstwar at 7:31 AM

My son just returned home safe and sound. His perspective on the whole thing is... WTF? His company was rsponsible for keeping the roads open. They drive up and down the roads in Buffalos. Sometimes they see an IED and disarm it, sometimes they trip an IED and the Buffalo gets banged up, sometimes Haji is waiting and starts shooting when the IED is detected (whichever way).

One thing is for sure, the next day they will be going up and down the same damn road and the whole scenario will repeat. Week after week.

Stupid and accomplishing nothing.

Avedis,
I'm happy for you and your sons reunion.
happy holidays.
jim

Avedis,
in my war we went to steam and creams and got blow baths and steam jobs. handy indeed and i SWEAR i was thinking of this before your ltr.
my war differed from todays because now you can get laid with female soldiers. but the staemjobs were simpler.
as for the reprimand- GOOD LUCK getting promoted or retained once the shooting stops. if it ever does.
a lor is a kiss of death. you should so advise the h

avedis,
i'm only replying b/c you are a friend and i feel are seeking guidance.
I swear i was thinking of this topic b/f i got your ltr.
in my war we sf dudes got donut dollies or got steam jobs and blow baths at the on post steam and cream. now soldiers get laid by fraternizing. the blowbath was sooo much cheaper and less messy.
as for the lor.advise your LT. that that is the kiss of the spider woman.i seriously doubt that he can out run that ding. i doubt he'll get promoted and if he does he'll be rif material when the shooting stops.
i remember when 1sgts busted our balls. never did they play with them.
i'm sorry to hear this story, but he's alive and has a life to live.
and he's got a good family.
submitted as a friend.
jim

Jim, I appreciate your input/thoughts. Alternative meaning to the title of your post?

I agree with your assessment. And you're right, there is no one I can talk to around here about it because of trying to keep up appearances with the neighbors and also because mostly there are only ex-enlisted that don't have a grasp of what happens in the O-club.

Lacking the kind of R&R opportunities you mention and having a good mix of female personnel seems to beg for this kind of outcome; though not making excuses for one who should know better. On a similar note, my daughter, PO2 Navy Intel out of Norfolk, has announced her engagement to a Chief in her command. So she/they was also skirting (no pun intended) the reg.s as well. No, she is not pregnant.

I am mighty concerned because i think he knows he has screwed the pooch and am worried about what he is going to try to do to undo his situation (e.g. 101st/volunteer for Afghanistan).

I offered the same as you. Alive and in one piece. Still have a job, no dishonorable or less than honorable discharge. Might make Captain in a couple years if fly straight. Might happen posted at BFE, but hey, at 24 years old, life is long and this too shall pass. Learn and move on. There will be a lot of life outside of the Army.

Avedis,
i have add'l cmts , BUT THEY ARE TOO PERSONAL for open transmission.
jim
lf9012@yahoo.com