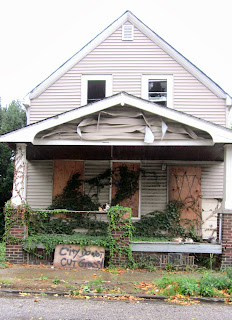 You still don't understand what you're dealing with, do you?
Perfect organism. Its structural perfection
is matched only by its hostility
--Alien (1979)

On the whole her frame of mind showed
a marked divergence from the purring complacency of Attab,
who was again curled up in his corner of the divan
with a great peace radiating from every curve of his body.
But then he had killed his sparrow
--The Philanthrpist and the Cat, Saki

The girls I knew had sad and sullen gray faces
with distant gay traces
that used to be there you could see where
--Lush Life, Billy Strayhorn
________________

New idea for Ohio state motto: "Ohio -- At Least We're Not Michigan." Don't get us wrong -- Ranger's home county is not much better. It is just that the derelict homes there were never once grander; they are mostly like Navin Johnson's family home in "The Jerk".

In a Bette Davis moment ala Archie Bunker, Ranger said of inner Cleveland: "What decrapitude!" (his elision of dilapidated + decrepitude.)

This morning's waitress did not dis me, so there's that. Jarringly for a Sunday morn, however, one of  two elderly women having a hard time at the paper box in front of the restaurant exclaimed, "Sh*t", as I walked by. It seems just another sign of society's general comedown. It made me think, "What will the tattooed, Jay-Z and Eminem devotees be like in their dotage?"

Lisa's definitely not a Midwestern girl. She has sometimes thought Ranger obtuse, and that he is intentionally so, but after a taste of this area has decided that for someone who has spent the majority of his life here and in the Southeast -- specifically Georgia, Alabama and FLA -- he's doing pretty good, gosh darn it.

So to the post's photo:

The cats own this home on 77th Street. Note the mother calico in repose on the porch -- she is surrounded by seven kits. Greenery has overtaken it, providing a soft lying ground. They have cleverly placed a sign outside, "City -- do not cut grass," to allow for more lush hunting grounds for the rats and other small rodents that compose their primary diet.

It was weird seeing the postman walking down these abandoned streets, with perhaps two operational abodes among the now-abandoned, plywood-boarded worker's homes. To head off potential break ins, pray-painted signs proclaim, "PVC only -- all copper gone"; it is unclear who might care about break-ins. The broken windows and jimmied doors suggest a robust squatter population. Pitiful to see the odd resident actually on a ladder attempting a repair; there will be no re-sale dividend for being the one upkept house in a dead zone, but it will keep the rain out.

Ranger was pulled over by a cop for driving slowly and rubbernecking in the upscale neighborhood of Bratenahl. Less than a minute after pulling into and leaving the driveway of what appeared to be an abandoned house, the lady p'liceman pulled him over, saying, "The residents don't like people entering their driveways." We were probably being shadowed shortly after we entered the street, labelled as potential hoods scoping out the area.

But a mere three minutes away in the vicinity of St. Clair and 77th Street we loitered for half an hour with no police presence. We're guessing the residents there see new blood is seen as positive as it might signal a potential drug buyer or a potential target; being a homie, Ranger is not a mark. Additionally, the residents seem enervated drinking booze as many do from paper bags at 11 a.m., so it is unlikely they could muster the energy to score an assault or call the police, or that the police would even respond.

So that's a Sunday in Cleveland.

The Tragedy of Detroit: "It Didn't Have to Be This Way"

While I'm sure there will be those who pooh-pooh this, its the simple fact that we've tried it the way of the Keynesians for so long that its time we do something different. Saying that Austrian School Economics doesn't work is to deny the reality that Keynesianism has failed, repeatedly. Its also amazing that Keynesian Economists bill their system as being like hard science but refuse to comply with The Scientific Method and/or Popperian Falsifiability.

Lest those forget, the definition of insanity is doing the same thing over and over again and expecting a different result.