RANGER AGAINST WAR: Children of the Corn <

Children of the Corn 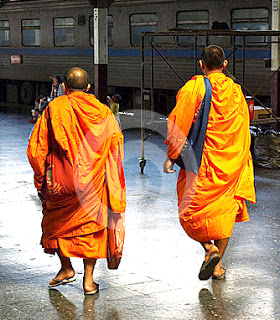 --Orange, the color of earnest novitiates

Did you ever know someone who said that we'd be
wild and crazy and free and then you find out she'd
been using the imperial "we"?
--Deadwood

Me used to be a angry young man
Me hiding me head in the sand
You gave me the word, I finally heard
I'm doing the best that I can
--Getting Better,The Beatles

We shall not cease from exploration.
And the end of all our exploring will be to arrive
where we started and know the place for the first time
--Little Gidding, T.S. Eliot

In solidarity with the United States' government shutdown, RAW will "congress" for a bit (not that we do not have tons of thoughts, queries and wonderments to share soon.)

He enjoyed an impromptu writing seminar this week with his friend, the inimitable mystery writer, Mr. Z. It was on his way to conduct some business in the Ohio area, and Ranger took a brief time out in his college town to reflect upon his personal journey. He lodged in a motel that abuts a cornfield. 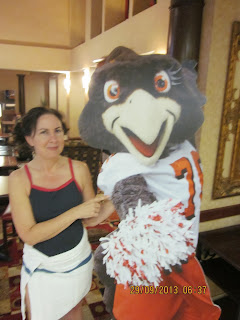 Mr. Z. expounded upon people's fascination with things supernatural, so we thought we would entice you with our own version of RAW, Paul Coelho-style. Is Ranger the next Benjamin Button?  To explain:

Ranger shares a certain skill with Bill Clinton -- he has a photographic memory. He stores data like the winning score of the last home basketball game in 1966; such things might be considered dead wood in need of pruning. To that end, he is on an introspective journey to sort the memories, lurching ahead like the ENIAC. Hopefully, his mental valise will be lightened after the effort.

Upon entering town, we saw a road sign and stopped for dinner at the local VFW post -- he, hoping to meet some brothers in arms. It was not to happen, but the dinner was well-attended by locals, and he was adopted by a kindly local couple who built their house near a cornfield and their florist shop in 1964 and never left. They seemed riveted by every small detail Ranger offered, in that homey Midwestern way: "Y'don't say?" punctuated every minute tale he shared.

Near their house at the end of a cornfield stood a wonderful old structure they explained served as  a conduit in the Underground Railroad ... could this mean Ranger is making his own escape to freedom from mental burdens?

"We don't know where we'll put ya, but we've got a sofa." Ranger's re-birth had begun.

A representation of Ranger's "power animal" -- the falcon -- stood in greeting in the motel lobby. He is "Freddy Falcon", the mascot of the BGSU sports teams. A native American soapmaker back home suggested that the falcon or hawk was his totemic protector.

That evening, he also found an orange silk tie in the walkway outside of his room, orange being the color of the 7th chakra symbolizing creativity and renewed faith. Buddhist novitiates wear the color. He then saw an older white man in Saugatuck wearing an orange pimp hat -- twice, and later in another town, two men in sequence but not related wearing orange formal shirts. His journey continues apace.

We will update you as the pilgrimage continues ...