RANGER AGAINST WAR: The Rake's Progress < 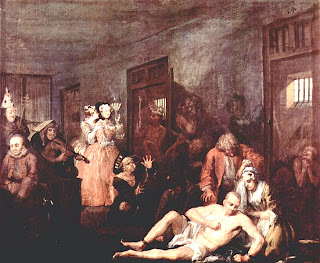 Subtitle: Down on Main Street, emphasis on down.


We will continue with our travelog apiece. But first, here is the Red Holland Harbor lighthouse we saw yesterday in Ottawa County, MI: 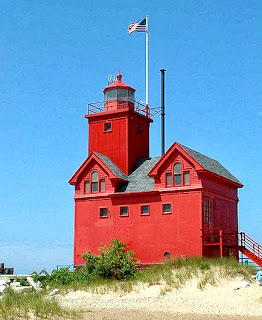 But today was Ohio, and in Vermillion we encountered preparations for Sunday's annual "Wooly Bear Festival". Now while true that vermillion is not orange, dear readers, Ranger's power color orange of creation and optimism yet raised its head there.

Wooly bears are the larval form of Pyrrharctia isabella, the Isabella tiger moth, celebrated for its mythical association to winter forecasting.  The truth is divined in the width of their orange bands. A woman told me these caterpillars can go into a state of deep freeze and awaken the following year, and can do this for 14 years. The women told the story at a roadside garage sale where they were selling many electric tools where Ranger was regaling her daughter with riveting tales of his successful efforts before leaving Florida with an easy-out bit on an old rifle; such talk seemed to suffice to enthrall the average Ohioan.

Lisa was miffed after a breakfast experience, and though she now feels more at pity for the offender, this is her catharsis.

It was an unimpressive joint, with an unusual handwritten sign in the window: "KARMA has no expiration date: 00.00.00". To explain:

Preferring smaller portions, when eating out she often shares an entree or orders a half-portion; often, that will be the child's portion. So it was in Port Clinton this a.m. A dollar less delivered a half-portion of the identical adult breakfast, but that is fine and what was expected. What was not expected was the rude response to her inquiry regarding the matter of the drink which was stated as included in breakfast on the menu but was not, in fact.

Now, water with lemon is my usual choice for hydration when feeling parched, as was the case this morning. But being part British, when tea is on offer, refusal is not an option. But specificity was the order of the morning, and I said clearly, "IF the drink is included -- as it says it is on the menu -- THEN I will take a tea." I expect nothing more, but nothing less, than what is ordered. A child's portion and drink was that thing.

However, the drink charge did appear on the ticket, and I inquired. But instead of receiving a calm explanation of the charge, she was confronted by a harpy in Aqua Net:

"Yes ma'am, I did, and got what I expected too, save for the drink. I asked the server if it was included, and said I would take tea ONLY if it was." At this display of humble earnestness, she refused to look at me.

"Pay for yer drink, for Pete's sake!" And off she stomped. Meanwhile, Ranger was in the back of the restaurant regaling her husband, the restaurant owner, with advice on how to apply for veterans benefits (he was a cook in the Army prior to owning the restaurant.)

It should be noted that the older couple dining in the booth behind us had just told this woman about a recent diner in the town who had left a scathing review of another resto on Facebook. "There's always one bad apple" said he, in an philosophico-Ohioan fashion. And dontcha know, after the woman's tirade, this couple approaches her and says of me, "There's your bad apple. See ya tomorrow"! WTF?!?

Now, this woman seemed to have everything a Midwestern woman could want: a frosted bouffant, jewelry from QVC, nails by her local Vietnamese nail shop, eager Mexican busboys, and a restaurant in a somewhat faded resort town. Yet she could not manage a tad of politesse.

She lacked the one necessary thing for being a successful restaurateur -- she had no joie de vivre, no bonhomie. She also lacked bog simple common courtesy and the desire to understand and satisfy her customer, the bread and butter of her business ... me.

Ranger surmised that the rudeness came as a result of a scarcity mentality in a poor economy. He also opined that larger women often cannot understand their smaller sisters' desire to eat less.

Why do some women get so bitter? Was her husband spending too much time in the kitchen? Was she worried about Goss's wilt -- Ohio's coming corn blight? Did she just take a dislike to me because a did not sound like a Canadian goose?

I will never know, and because their place will never be reviewed on Chowhound, I will be unable to share my story. But with you, kind readers, I share my feelings of deracination.


Tomorrow: this beats most cat vids