RANGER AGAINST WAR: All Atwitter < 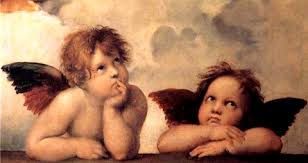 What follows are some apothegms, witty aphorisms jottted down apropos of nothing in particular. Some of them are epistemological gems. He is a thinkin' Ranger (they exist), but you already knew that.

If we Tweeted, these might garner a new following, but we do not; one must maintain some dignity.

We will mete them out a few at a time over the following weeks, and will ask the readers to engage with them. Feel free to extend, personalize, or outright refute them. Like the hipsters say, it's all good.

2. Being patriotic is like going to the movies. One must suspend one's disbelief.

3. United States military policy should not be to avoid wars, but to win those we deem necessary.

4. We should not fight a war that we can afford to lose.

7. Ranger's rule of non-rational reactions: for every action there is an unequal reaction.

8. Science fiction is the belief that technology can win wars.

9. Why does the U.S. go ga-ga to save Islamic refugees, but in World War II we were content to let six million Jews go up the smokestack?

posted by rangeragainstwar at 5:57 PM

On your third point, the problem always is, who gets to decide which war is necessary?

I am old enough, as we all are, to remember that it was necessary to attack Syria, Iraq, Afghanistan, and even -- yes -- Serbia. We had to attack Iraq to protect the Kuwaiti royal family's holdings. It was even necessary to invade Grenada.

I'm not old enough to remember the Vietnam War firsthand, but I assume that was a necessary war too.

The founding fathers decided to limit the temptation to fight "necessary" wars by giving that power to Congress instead of to the commander in chief. Unfortunately Congress seems to have surrendered this power, since Vietnam if not before, so completely that there was hardly a murmur of protest at its latest flagrant violation by Trump when he committed acts of war against Syria.

David,
as u know i believe that no war that the US ever fought was necessary, but i'm still residing on planet earth and i know that we amis will always find a reason to drum up a necessary war.
i know that my thinking is somewhat contradictory on this point, but i do the best that i can with my little ranger brain.
jim

No, I understood what you were saying and it's not contradictory.

The problem is that the "bar" for necessity, if you will, seems to be set absurdly low both for the government and for a large amount of the population.

And I didn't even mention the faintly ridiculous "necessity" of committing the country to a suicidal nuclear war in defense of the honor of, say, Estonia, but if I remember right you're also skeptical of that too.

David,
it's strange to say i'm against war , and then say we should fight necessary wars.
this is my bending to survive in present tense realities.
it's also weird to talk about JUST WAR when its clear that no war can be just.
its'weird to bust any countries balls, ie iran/noko etc for wanting nucs.
hell we have a corner on the market and we've proven that we will pop them to the dawns early light.
there is a crack in every thing.
i'm in mentor ohio for a vet day affair and its 26 degrees and snowing.
it's 85 at home.
jim

Jim & David,
I have long thought that our politicians are not qualified intellectually, morally or by experience to make decisions about war. Therefore, we should eschew war making war and become isolationist when international affairs can't be managed by diplomacy, business deals, etc. Our politicians seem to screw up those approaches too. So I guess we should just isolate.

That said, I despise jihadis/islamists. I don't want the US to nation build for those guys. Mostly, I don't care about clever grand strategies or results beyond body counts; just kill them, often and thoroughly for decade or so. If we feel a need to try out drone piloting, our nuke arsenal, whatever ordnance, etc., then the MENA is great place to do it. So, IMO, it would be ok *if* people considering entering military service had it explained to them, before they raise their hand, that there is a high likelihood that signing the bottom line means being deployed to kill rag heads. If they sign, then they accepted the mission while they still have a choice (in fact, after 911, that's pretty much what the deal was, and many went for it joyfully). But the key is no nation building, no working with the indigs, no ROEs (zip, 0, nada), no pesky reporters writing sob stories about misbehaving troops, human suffering on the side of the muslims and the troops being well led, well supplied and generally well taken care of. Under those conditions, we could actually wipe militant Islam off the face of the map in the MENA. The survivors would be pacified subjects with friendly ruthless dictators governing the region. Repeat as necessary. Otherwise, we should isolate.

"The survivors would be pacified subjects with friendly ruthless dictators governing the region."

I believe we've tried this. It usually involves endless military and political aid to prop them up, eventually followed by interventions justified as nation building, or winning hearts and minds, or one thing or the other.

I don't mind that you despise Islamists. However, it seems to me the smarter thing would probably be just to tell the Middle Eastern dictators that they're on their own now and had better figure out a way to work with that. That way, the rest of us don't have to keep sending men to die for Islamic republics, the ISISes of the world will lose the excuse of Western social engineering to justify their barbarism, and maybe, just maybe, said dictators will be forced to get their act together and govern their countries instead of running to the U.S. for shiny new toys every time they think there might be a monster under the bed.

Going off Jim's point, it seems to me that none of the wars in the Middle East are necessary except to those who want to be at the head of a large and profitable empire.

David,
Largely agree with what you (and Jim) say. It would be fine if the Western world wasn't allowing an invasion of their countries by these barbarians. It would, indeed, be much easier and better to just let kill each other off.

I for the most part concur.

But could not for the life of me figure out #6. Maybe it is just my high density skull? WTH are you saying?

Mike,
i'm saying that we didn't do much to help the Jews to escape genocide,BUT we as weastern man are going to great lenths to save folks not in danger of genocide.
jim

However if the goal is to reduce the number of refugees streaming out of the Middle East, then not purposely destabilizing the countries they are coming from seems like something worth considering.

I guess the counter argument would be that just because we were anti-Semitic in 1939 does not mean we should be uncompassionate in 2017.

Again however it goes to the extent to which our own countries are prepared to "solve" other countries' problems.

Ironically if I read the court rulings this year right, it would now be unconstitutional to target Christian, Yasidi, etc. populations and not admit Muslim refugees with equal standing.

I'm still in a quandary regarding your rock&roll comment, your axiom #6. That was my question.

David,
a little clarification is in order here.
my family on both sides came to the us in early 1900's. so i have no horse in the slavery race.
since we left family behind i do have some association with the jewish situation.
and feeling for the issue.
in bratislava there were parking lots built with jewish headstones.
this is not a proud thing for my ethnic homeland.
that's why we left the old country which was to leave the old life behind and to become americans.
now we protect the old country.
it's too much for a simple minded ranger.
jim

David,
one additional thought.
what would the arbs do with the jews if they ever defeated them on the battlefield?
what would the crazy former warsaw treaty members do to the jews if they had the chance?
have you noticed that what we call the eu and nato sure looks a lot like the borders of the 3rd reich.
let's throw in the ukraine when asking the jewish question.
we could call it the smokestack like lightening blues.
jim

Half of my family is German Mennonite and came to South Dakota in the 1880s. The other half is Irish and came to New York during the famine. Both groups were religiously suspect at the time, I gather, for different reasons.

It wasn't only the U.S. that refused Jewish refugees in the 1930s. Hitler agreed to let a ship of 1000 Jews sail off to the Americas in search of a new home. They were turned away by Cuba, America, and Canada. Eventually they went back to Europe.

David,
a slight point of clarification.
they went back to the smokestacks located in europe.
jim

The point is, at the time, everyone was more than happy to wash their hands of the whole thing. And thus Hitler nodded and said, "See? You don't want them either."

I suppose a similar scenario could play out today.

David,
Hitler also drew upon the Armenian genocide to justify his own "final solution". He is allegedly quoted as saying "But who remembers the Armenians" when asked how Germany could get away with wiping out the Jews. To this day it is crime in Turkey, punishable by prison time, to publicly discuss what the Turks did. At least the US did admit Armenian refugee immigrants to the US after the genocide. When it was happening, though, the Euros and Brits stood down. Turkey is a "valued" NATO ally, they say.

Sometimes I think the USA is going crazy trying to atone for these oversights of the past....a craziness that makes the future worse. That pendulum always swings so far and wide.

It's 60 at home. Thank you Cleveland lake effects (and I 'spose CAN holds some blame, too.)

Yes, well, Turkey supposedly is still a "valued NATO ally," even though right now they're backed by the Russians and we're backing the Kurds instead.

I don't know whether this is more reminiscent of the European great game or just native tribal warfare, but either way, if memory serves, some very silly revolutionaries 240-odd years ago thought people could be more honest and more prosperous by avoiding these entanglements.

16 years on, nobody has yet given me a persuasive case why a single countryman of mine should be called on to give his life for the sake of Middle Eastern despotisms.

David,
Oh I agree with you. I have always wanted to know what "US interests" we are "protecting" in the MENA. Never gotten an answer.

My point was merely that IMO we can't have a bunch of primitive head choppers running around forming caliphates and then expanding their madness into Europe and the US if we are going to be all about open borders and massive immigration.

I read somewhere recently that European countries are now paying Libyan gangs to be de facto "border security" for them, i.e. bounties to turn around would-be migrants before they get on boats in the Med. Interesting if true.